Another year of the woman 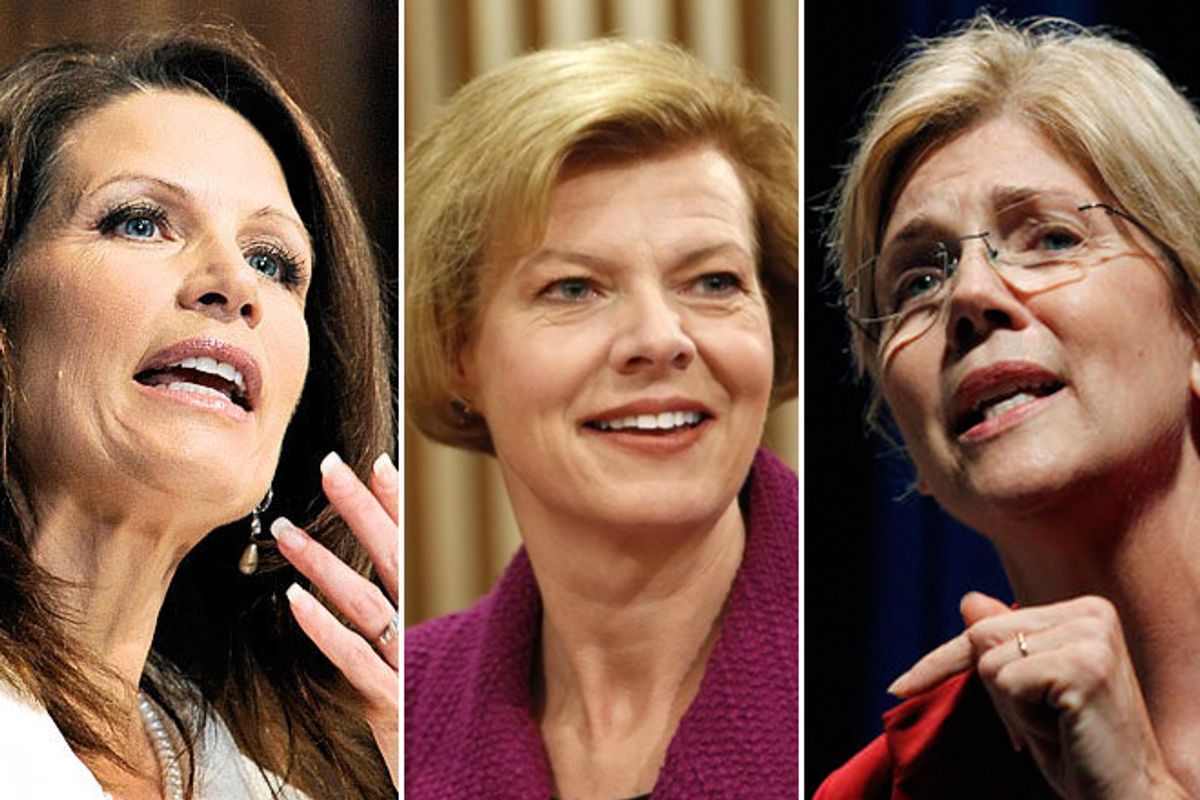 In this election year of "I love you women," of rape-parsing and slut-talk, a pretty notable fact has been overlooked: There are more women running for Congress than ever before. And that includes remarkably progressive, path-breaking women -- like folk hero Elizabeth Warren in Massachusetts, or like Rep. Tammy Baldwin in Wisconsin, who just might become the first lesbian senator -- as well as a host of far-right women, like the climate change-denying, anti-choice, anti-gay-marriage Deb Fischer, who is poised to beat Bob Kerrey for Nebraska's Senate seat. Oh, and Michele Bachmann, whose seat looked like it might be at risk, but who has led comfortably in recent polls.

According to the Center for American Women in Politics at Rutgers, there are 18 female U.S. Senate candidates -- 12 of them Democrats, six of them Republicans -- and 166 women running for the House of Representatives, up from previous records of 14 (in 2010) and 141 (in 2004), respectively. (The House women running, many of them incumbents, are overwhelmingly Democrats, 118 out of 166.)  But before anyone gets too excited, the United States ranks 91st in political representation of women, who as of now make up 17 percent of Congress and 12 percent of governors, and even if women sweep, that'll be an incremental shift.

Tonight, I'm joining the war room of EMILY's List, which recruits, trains and raises money for pro-choice female candidates, and is basically the epicenter of a female wave in Congress.

EMILY's List's Deputy Communications Director, Jess McIntosh, has sent out an email noting that the organization has raised $52.2 million dollars, a record for the 27-year-old organization, which also quintupled its membership. McIntosh is ready for a long night, but as a former staffer for Al Franken's near-unending Senate campaign -- working under current EMILY's List president Stephanie Schriock -- she's used to worse:  "A really long night is when they tell you to sleep the 5-6:30am shift," she says.

"I feel good about tonight," she says from the war room over nachos. "There is no race --Senate, House, presidential, where I would rather be them than us right now. But we're going to have a lot of close races," including Wisconsin, where the group is supporting Tammy Baldwin for Senate, and Nevada, where it's helping Shelley Berkley try to unseat Sen. Dean Heller.

Why are there so many women running this year? McIntosh points out that it's all about the pipeline -- EMILY's List has been supporting Baldwin and Berkley since they first ran for Congress in 2008, so when seats unexpectedly opened up, they were ready to go and the donors were primed.  "We had done the decades of work to find these women," says McIntosh, no easy feat since women generally need to be asked to run several times.

By 9:15, good news starts pouring in for EMILY's List candidates: Maggie Hassan for New Hampshire governor, and, it appears, Elizabeth Warren for Senate, the call for which causes the room to erupt in shrieks. Then there's a moment of mild terror, as it seems as if the Warren call was either premature or a Twitter hoax. In the end, it's a night of startling good news and record-breaking. More here.

Tammy Baldwin, Wisconsin. LGBT and pro-choice groups have gone in big on behalf of Baldwin. She arrived in the House in 1998, where she became one of the most liberal members, voting against the Iraq war invasion, supporting single-payer healthcare and advocating for equal pay and access to reproductive health. The race against former Gov. Tommy Thompson is tight in this swing state.

Maggie Hassan, New Hampshire. Hassan isn't just the only woman running for governor this year -- if she beats Ovid Lamontagne in New Hampshire tonight, she'll be the only pro-choice female governor in the nation, per the Daily Beast. Before a Tea Party sweep unseated her as Senate Majority Leader, Hassan helped pass New Hampshire's legalization of gay marriage, a law Lamontagne opposes. Lamontagne's defense in this year of "war on women" rhetoric included running an ad saying that he has a wife and daughters whose “concerns are very real to him.” New Hampshire also has two female senators, and two pro-choice Democratic women are running for the two House spots, setting up the state to lead the country in representation of women.

Heidi Heitkamp, North Dakota. This race went national when pro-choice groups tried to hang Heitkamp's opponent, Rick Berg -- and his support of a bill that would criminalize women who have abortions -- around the neck of Mitt Romney, though it didn't get nearly as much as play as Todd Akin or Richard Mourdock. Former Attorney General Heitkamp is well-liked in the state, but it's an uphill battle for any Democrat.

Tammy Duckworth, Illinois.  As it happens, Duckworth served heroically in Iraq, where insurgents shot down her helicopter, and as it happens, she's running against a man, Joe Walsh, known for incendiary Tea Party rhetoric -- including complaining she had talked too much about her service -- and a dispute over his child support payments. She lost narrowly in 2006, but this just might be her year.

Michele Bachmann, Minnesota. The sometime presidential candidate who claimed that the HPV vaccine causes mental retardation, that "The Lion King" is gay propaganda, and whose latest side project is anti-Muslim witch-hunting is now trying to represent herself as a bipartisan-minded "independent." Despite Bachmann having outspent her opponent, Jim Graves, 12-to-1, the race is tight, though she should be cheered by recent polls.

Deb Fischer, Nebraska. Though he got some Republican endorsements, former Democratic Sen. Bob Kerrey's quixotic attempt to take back his seat after years in New York appears to have been futile. It's looking a lot like outgoing "centrist" Sen. Ben Nelson's seat will be filled by state Sen. Fischer, alongside fellow Republican Mike Johanns. Fischer wants to ban abortion in all circumstances and repeal Obamacare, and has won the endorsement of the NRA.