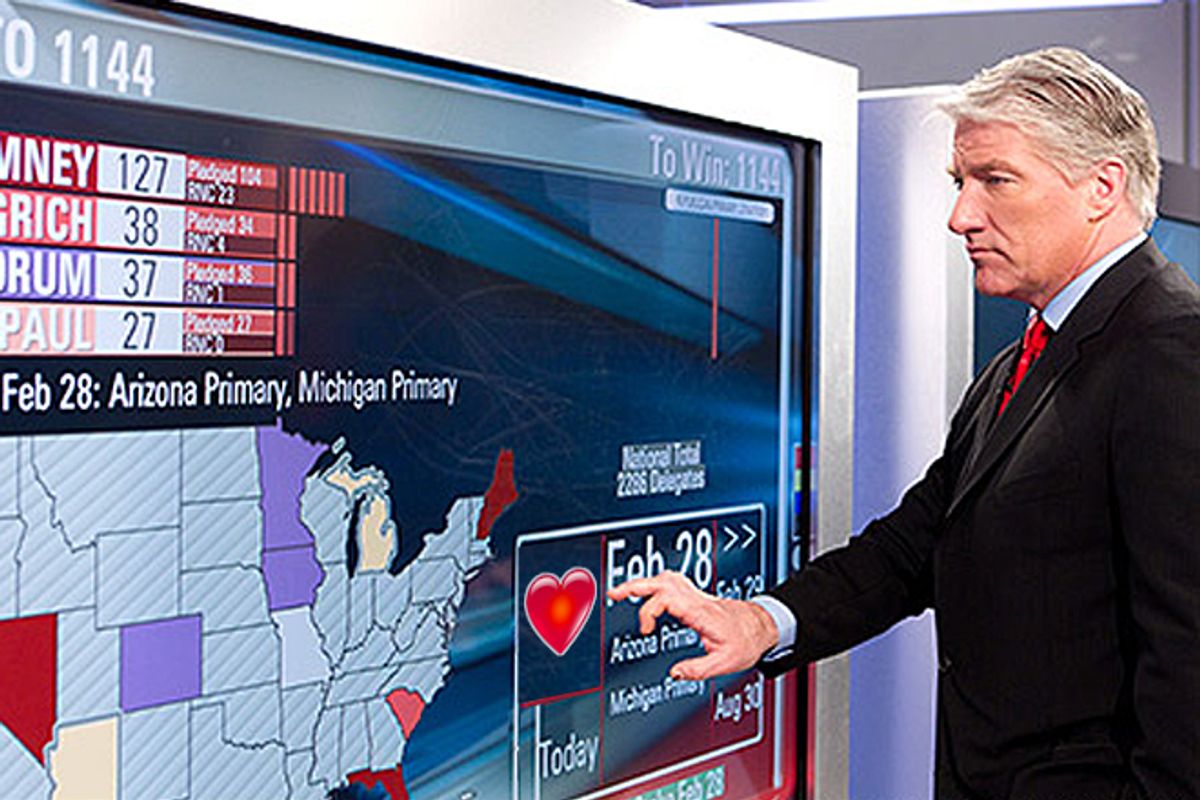 CNN national correspondent John King married Electoral Map, his longtime CNN colleague, in a star-studded ceremony on Martha’s Vineyard last weekend. The most anticipated wedding of the year was held at the home of former presidential advisor David Gergen and was attended by a host of political and media luminaries that included former President Bill Clinton, Tom Brokaw and CNN founder Ted Turner.

“I’m happier now than at any point in my life,” said Mr. King after the ceremony. “Except maybe the 1994 midterm election or the Florida recount or the day I discovered that white working-class, non-college-educated voters in Kent County, Michigan, were moving toward Reagan in 1984.” President Clinton gave the marriage his blessing. “I know Electoral Map better than anyone,” said the former president. “She and John will make a wonderful couple.”

It was a mixed-faith ceremony, presided over by both a Catholic priest and a precinct officer.

At the reception, guests munched on Beluga caviar, wild Atlantic salmon and baked Alaska. After dinner, the bride and groom took to the dance floor as the DJ launched into an impressive mix of campaign jingles that included “I like Ike,” “High Hopes” and “Tippecanoe and Tyler Too.” Mr. King strained to push Ms. Map around the dance floor, at one point stopping to wipe sweat from his brow and catch his breath. After he collected himself, Mr. King lifted up his bride’s dress and showed off Ms. Map’s beautiful technology with a rapid-fire succession of electoral facts and images. Mr. King’s hands danced around his wife’s body with ease and flair, which several attendees compared to Liberace playing the piano. The guests oohed and aahed as Mr.King treated them to a Technicolor montage that included a hypothetical 1972 election outcome factoring in a fictitious Richard Nixon lazy eye, miniature holograms of Candy Crowley and Sanjay Gupta, and the results of a Cuyahoga County focus group from the future.

Gloria Borger, who frequently appears on CNN with both Mr. King and Ms. Map, said their affection for one another was obvious from the start. “John can’t keep his hands off her,” said Borger. “It’s been that way since they met.” Two-time presidential candidate John McCain said of the bride, “I’ve really never been able to figure her out. But John obviously has. He’s clearly smitten.”

The bride is taking the groom’s name and will now be known as Electoral King. This is Mr. King’s second marriage and Ms. Map’s third. The bride’s first two marriages ended in divorce.