Women are supposed to dread the surgery and embrace the beauty of natural birth. Are you kidding me? 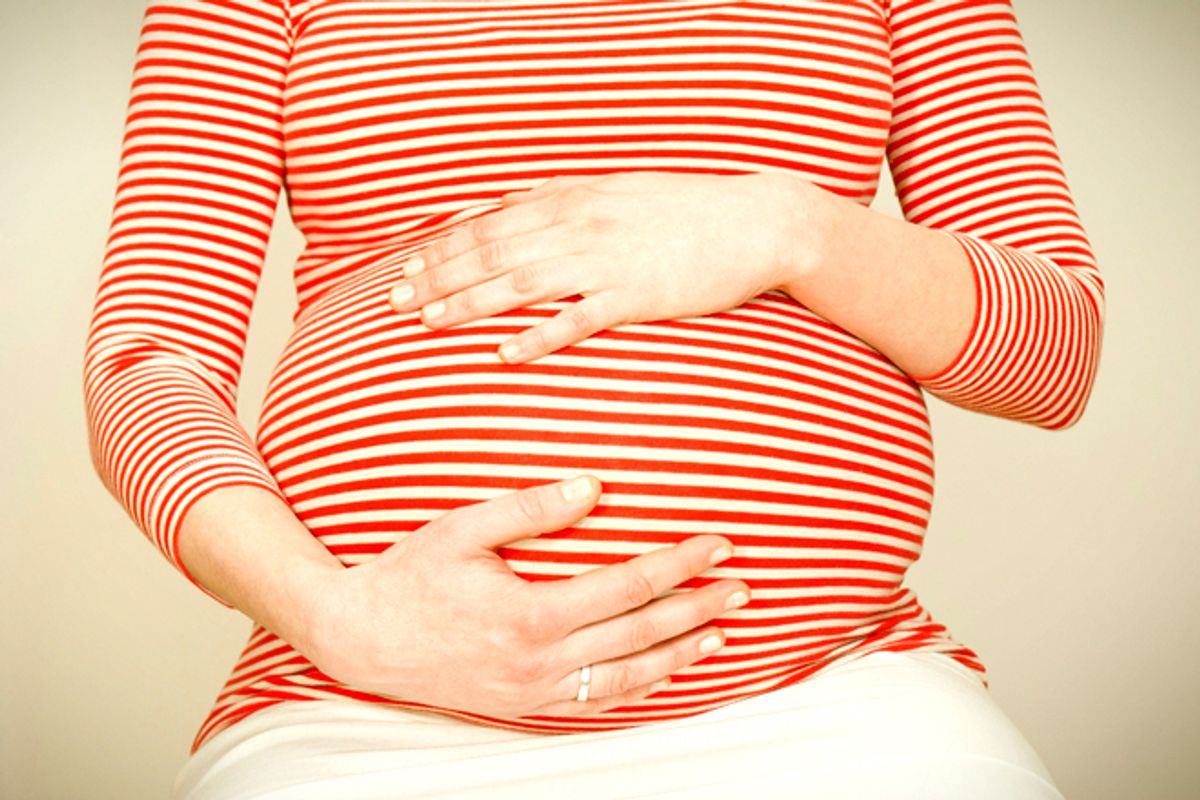 Five years ago, I prepared for the birth of my son like any self-absorbed, pampered mother-to-be in the city of Portland, Ore., might: I gave up hot tubs, sushi, stinky cheese, Tylenol, booze, wine and coffee, and I told anyone who would listen about my sacrifices.

I spent hours studying my baby’s development on a website called Babycenter.com, which explained that he resembled a sesame seed at week 5, a kumquat at week 10 and a bell pepper at week 18. Perhaps subconsciously inspired by their comparisons, I consumed so many raw vegetables and legumes that I walked around most days enveloped by a noxious cloud of gas.

I attended prenatal yoga, where the instructor encouraged us to gripe for a full half-hour about our blown-out backs and throbbing feet and constipation, and where the other women all pretended not to notice that I was the stinkiest among them, though they all sat at a respectable distance, having realized that downward dog tended to stir things up down there.

The power pregnancy exerted over my body and my brain freaked me out.

For some women, pregnancy is a profoundly liberating experience. For others, it is a total drag. Firmly in the latter camp, I convinced myself that if I did everything by the book during pregnancy, I would emerge, at the end of 40 weeks, a highly skilled mother, completely prepared for whatever the tiny baby threw at me. As long as he didn’t throw actual things at me.

So at the start of my third trimester, I enrolled in 10 weeks of 2½ hour childbirth education classes. I dragged along my husband, who would have rather been working late those nights, not rapping about vaginas. Or who would have enjoyed talking about vaginas very much, but in the usual fashion, over beers after tennis with his guy friends.

But there we were, in a hospital meeting room with a woman who called herself a professional childbirth educator, and who kicked off her shoes and socks at the start of the class. We should feel free to do the same, she said, and we stared coldly back at her, at this filthy hippie who knew how the hell to get these babies out.

How the hell to get these babies out. Five minutes into that first class, it gobsmacked me, the truth at the end of all the vegetables and yoga: I had to get the baby out.

Much to the concern of the husband, the hippie and my classmates, I erupted into maniacal giggles and split for the bathroom to splash cold water on my face. My brain clutched so compulsively at one idea that I felt as though I had stripped a critical cognitive gear.

Somehow, I suppressed my hysterics and returned to class, mute and unable to comprehend a single word from the hippie.

I studied my classmates, who managed to neatly represent several Portland stereotypes, years before the TV show “Portlandia” made our weirdness accessible to the masses.

But I remember Spring and Randy best. (Those were not really their names.)

Spring was the most miserable pregnant woman I had ever seen, with a belly so massive that when she entered the room she drew a gasp from the other pregnant women. Randy, her sidekick and life mate, looked like a drummer in a metal cover band. He asked a lot of good questions, Randy. Spring didn’t talk much.

We left class that night lugging a binder full of homework. In the car, I explained to my husband why I’d flipped out. My pristine vagina was about to be blown to smithereens. He patted my hand supportively, but his face went ashen at the words “pristine,” “vagina,” “blown” and “smithereens.”

A few days later I visited my obstetrician. She felt my abdomen, remarking that the baby hadn’t turned head down yet.

The gear in my brain that had been stripped during my itty-bitty nervous breakdown clicked back into place.

“Does this mean I get to have a C-section?”

“Have to, I mean,” I corrected myself. Mustn’t appear too eager.

Not necessarily, she said. There’s plenty of time left for him to turn. I acted reassured, then immediately called my husband.

That night, I read dutifully from the childbirth education class binder and my stack of labor and delivery guides, which were chockablock with juicy tidbits about the Ring of Fire and pooping on the delivery table. I stared at the diagram of a cervix dilated to 10 centimeters. And then, just before I switched off the light, I held my belly and whispered to it.

Women are not supposed to want C-sections. We are expected to dread them, and, when they’re necessary, grieve them. About one-third of all babies born in the U.S. right now are delivered by C-section, and the percentage of births by cesarean delivery rose nearly 60 percent from 1996 through 2009, according to the Centers for Disease Control and Prevention’s National Center for Health Statistics.

During my pregnancy I worked as a public health reporter for a newspaper, and so I understood why the increase in C-sections alarms many. They can be riskier for the mother and the baby. It takes weeks to heal from one. They can impede breast-feeding and bonding.

But I was so afraid that I pushed all of that aside.

Because I knew it made me look weak, and possibly crazy, I told only a few girlfriends that I was hoping to have a C-section. They usually responded tenderly, the way girlfriends do, something on the order of, “Are you nuts? Don’t you think a C-section will hurt, too?”

I kept up with our weekly childbirth education classes, gawking at Spring, who, as she entered the class each evening, seemed propelled by nothing more than rage over her increasingly dire predicament. Each week at the class dinner break, she and Randy would suck down a cheeseburger and fries from the hospital cafeteria. I gawked at that, too.

Randy, an exceptionally engaged apprentice labor coach, peppered the hippie with questions, really drilling down during the class where we covered birth interventions.

“I think I speak for everyone in this room when I say we’d like to avoid an episiotomy,” Randy said, inquiring earnestly about the efficacy of applying essential oils to the perineum.

We all looked quietly down at our binders. We knew -- everyone knew -- that a beast grew inside Spring’s womb, and that, when it clawed its way out, Spring would need, at minimum, an episiotomy. Randy better invest in a Chevy with a bad-ass Hemi, ‘cause he was gonna need it to tow that critter out of Spring.

At least once during every class I’d dissolve into the same fit of giggles that felled me on the first day. Anything could trigger it, but the birth films, with their syrupy background music accompanying the mother’s cries of agony, really slayed me. It got to where many of our classmates avoided making eye contact with me, the resident lunatic. Of course, that could have had something to do with the noxious gas, which had not exactly let up. There I sat in class each week, laughing and farting, laughing and farting.

Several weeks in, the interracial lesbian couple told the hippie that, to their dismay, their baby was stuck in the breech position. What could they do to budge him? The hippie suggested acupuncture, chiropractic manipulation or a procedure called an inversion. Emboldened, I spoke up.

There. I’d said it. The dirty word. The C-word.

The hippie shook her head and launched into a litany of the drawbacks and potential complications of a C-section. I tuned her out. This baby was not blasting out of me. No, siree.

Through it all, my son obligingly stayed head up. My doctor suggested I try lying upside down or getting on my hands and knees because it might get him to flip. Sure, I’d tell her, then go home and stay as upright as possible. I even slept sitting up.

Just before my due date, my husband and I attended an eight-hour baby care and breast-feeding boot camp, hosted by two women in their 50s who had 12 children between them. Expect labor and delivery to take hours with your first baby, one of the women said, but a lot less time with the next one.

“It’s like your vagina has pleats, and that first baby just squishes them all flat,” the teacher guffawed.

My stomach lurched. This was not funny at all.

And, just like that, we left. Two more classes remained in our Childbirth Comprehensive Package, but we skipped them. The hippie and Spring and Randy and the gang would just have to push on without us. I’d reached my childbirth education limit.

A few weeks later, my son was born. A nurse hooked me up to an I.V., an anesthesiologist jammed my spine with a massive needle, another nurse strapped my arms down and two doctors cut me open while discussing Hillary Clinton’s chances against Barack Obama.

Part of me will probably always wonder if I could have avoided the C-section and gotten my baby to make a U-turn if I’d stood on my head or let my obstetrician push on my belly. Would I have been tough enough to withstand a vaginal delivery? Women are built for this, aren’t we?

Recovering from the C-section hurt. A lot. Like, for six weeks. My girlfriends were right. I was nuts.

But more than that, I remember what I felt the moment I saw my son. I had a name now for what had scared me, really scared me, about becoming a mother. I’d put all my energy into worrying about my son’s birthday, when it’s every day after that matters.

I felt a deep ache in my gut, and my throat tightened, and I knew it.

Paige Parker is a writer, teacher and writing coach based in Eugene, Ore. She blogs at takingfences.wordpress.com.