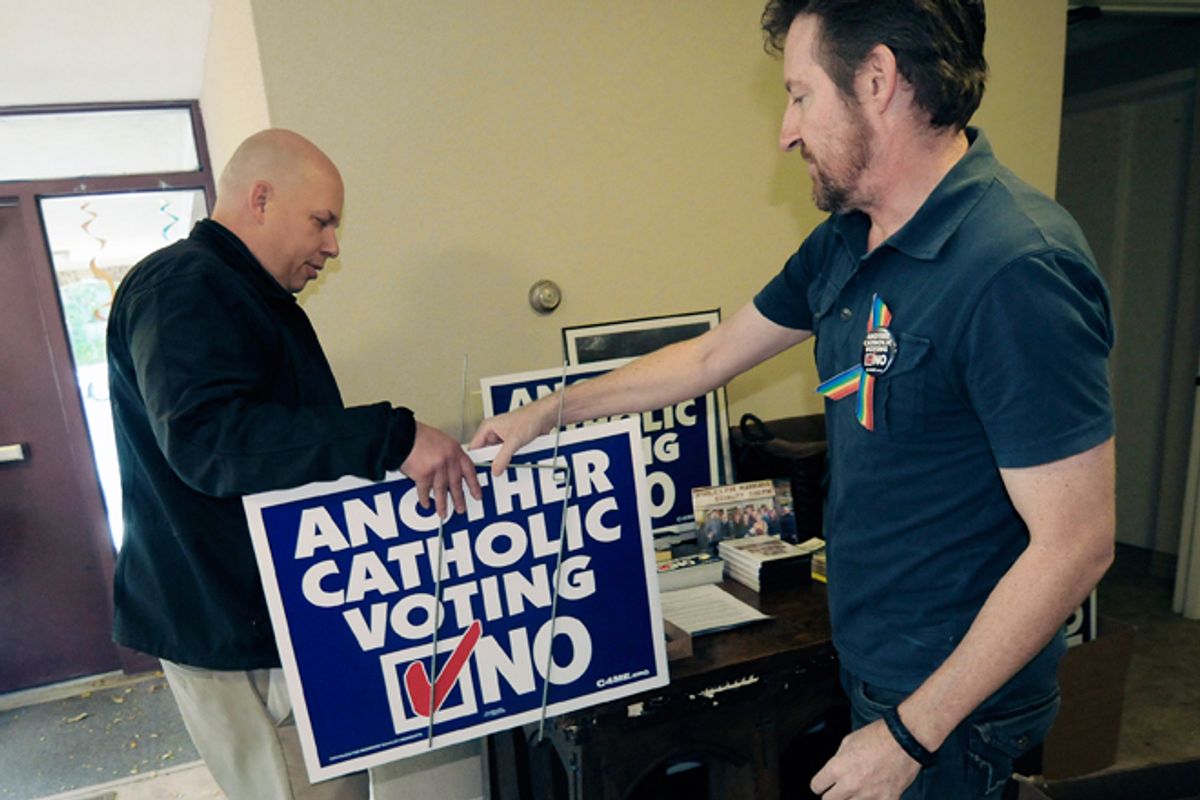 A generation or two ago, Catholics were a rock-solid Democratic constituency. No longer. Today, they make up the nation's largest and most coveted swing voting bloc. Since the 1960s, white Catholics have moved somewhat to the right and now trend slightly Republican -- though they narrowly went for Obama in 2008 -- while the Catholic position on the left has been shored up by Latinos. How will they vote this year? The question is an even bigger deal than it seems: In recent elections, the Catholic bloc has voted the way the country votes. "Catholics are the ultimate religious swing group," says religious scholar Mark Silk. "They’re always going with the winner."

Silk, who writes a blog for the Religion News Service and is the director of the Center for the Study of Religion in Public Life at Trinity College in Connecticut, spends his time analyzing polls and studying voting data, looking for clues to how Catholics will swing this time around. What will weigh more with them? Mitt Romney's talk of religious freedom or President Obama's of social justice? (Catholic) Paul Ryan's antiabortion absolutism or (Catholic) Joe Biden's commitment to choice?

Salon talked to Silk over the phone recently for clues to how the Catholic vote will break this year.

What are the big issues for Catholic voters?

In terms of moral issues, a majority of Catholics, even the most observant Catholics, say social justice and the obligation to help the poor is more important than issues like abortion and the right to life. It drives some conservative Catholics crazy, but most Catholics actually support same-sex marriage by a moderate margin. And they are evenly divided on abortion, slightly in favor of a woman’s right to choose. And it's important to understand that although the bishops don’t like it there really is a readiness on Catholics' part to take the Joe Biden position: I’m personally opposed to abortion but I don’t think I should impose my religious views on others who don’t share those.

Certainly more than evangelicals do. Fifty-four percent of Catholics believe that gay and lesbian couples should be able to marry legally, whereas 73 percent of white evangelicals oppose same-sex marriage. So you’ve got a real divergence there. And I think the Obama campaign has made the clear calculation that supporting same sex marriage is not going to cost him.

Is there an issue that can distinctly appeal to Catholics as Catholics?

Catholics, like any other kind of American, are embedded in communities and have particular jobs. If you’re a Catholic auto worker in Toledo, then that’s going to be a big issue when Obama emphasizes his role in the auto bailout. If you’re a Catholic coal miner in southeast Ohio and Romney is talking about more coal and Obama is talking about green energy, then it could push you the other way.

Some of this has kind of manifested itself with the critique of Paul Ryan and his intellectual love affair with Ayn Rand and libertarian economics. Ryan gave a talk today on the poor and has tried to go around and claim that he pays more attention to Thomas Aquinas than he does to Ayn Rand. That’s not a kind of debate that is playing big, I suppose, for rank and file Catholics who are not reading Commonweal and the National Catholic Reporter, you know, the sort of intellectual types. But it does point to a deep-seeded tension between a conservative American Catholicism, which has for a long time been wanting to be more pro-capitalist than Catholic social teaching has been for over a century, and the church and rank and file who think that the almighty dollar is a false God and an idol.

Earlier this year, Obama ran into trouble by requiring that religiously affiliated institutions like Catholic colleges and hospitals provide health insurance coverage for contraceptive services. Does that still resonate?

The bishops were very unhappy about this and pushed for an exemption, and the administration moved around some; they sort of found a way to make this simply an obligation for the insurance companies rather than the payers. What’s interesting is it seems to have extraordinarily little traction with ordinary Catholics. Like most Americans, they  think that these institutions should be required to provide this coverage.

A lot of Evangelicals supposedly are ambivalent about Romney's Mormonism. How do Catholic voters feel about that?

Catholic voters have no problems that have ever been discerned. It’s not to say that you couldn’t anecdotally find some Catholic or other who thinks Mormonism is weird or unacceptable, but it doesn’t register on any surveys anywhere. Partly that's because the Catholic community has a memory of being a disfavored religious minority, so they're really sensitive to religious prejudice.