Could voting irregularities sway the election?

It's too early to tally the impact of glitches, screw-ups, and assorted shenanigans. But boy, what a mess 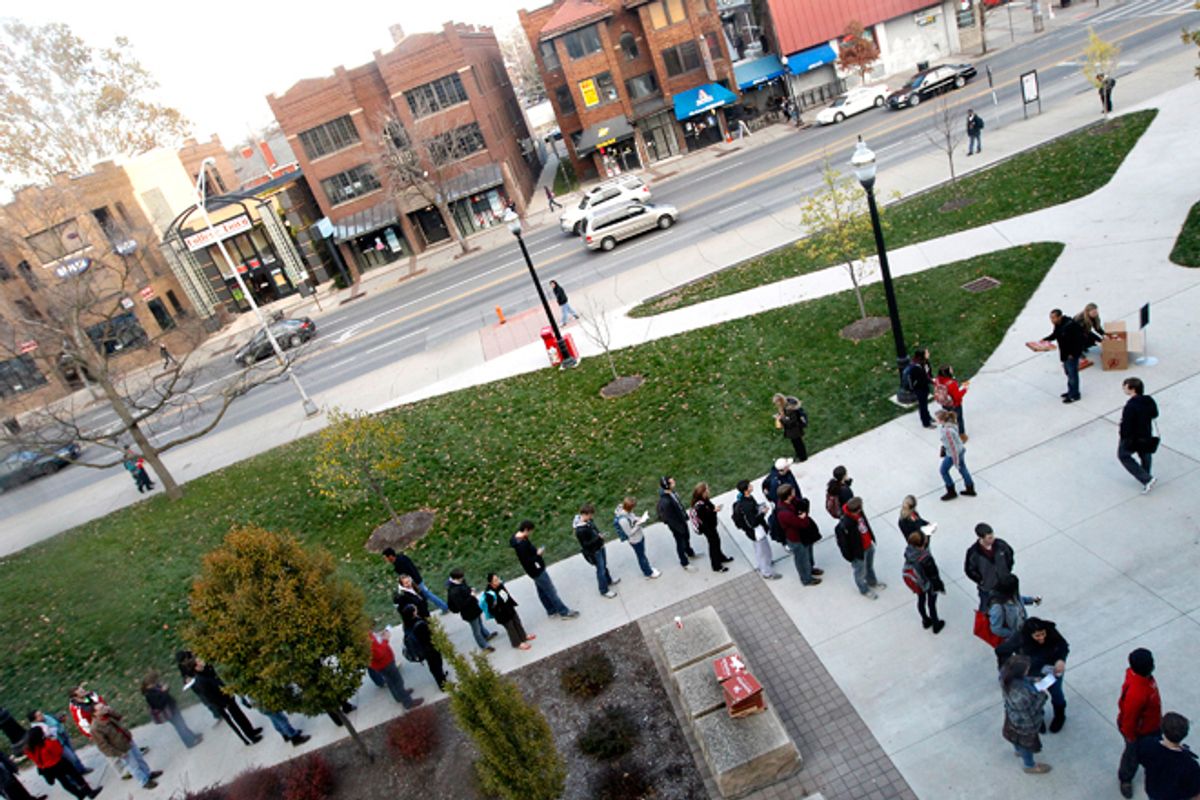 This is the $6 billion election – the most expensive ever – and yet voters in parts of Florida and other swing states are still having to wait four hours or more to cast their ballots. Households in the biggest battlegrounds have been inundated for weeks by carefully scripted robo-calls, glossy campaign mailers and a blizzard of TV ads – no expense spared -- and yet in far too many places the voting machinery is old, creaky and in short supply. Since the polls opened this morning, there have been reports of machines freezing, misaligning, jamming and awarding votes to the wrong candidates, and of voter disinformation and intimidation, some of it generated directly by the candidates and their campaigns.

In Ohio and Florida, high-profile officials responsible for overseeing the vote weren't shy about showing their naked partisanship, seeking measure after measure – with varying degrees of success – to suppress votes likely to trend Democrat. In at least two states, Iowa and Texas, international election monitors were threatened with arrest if they got too close to a polling station.

It’s too early to know if any of the reported “glitches” – as the networks are fond of describing them – are serious enough to influence the outcome of either the presidential race or any of the other big congressional contests. More on how that might play out in a moment. First, though, a roundup of some of the low points of the day:

• Biggest screw-up. Election officials in Pinellas County, Fla. (that’s the St. Petersburg area, along the all-important I-4 corridor) accidentally sent out robo-calls this morning telling voters that they have until 7 p.m. “tomorrow” to submit absentee ballots. The robo-calls were supposed to go out yesterday. It took more than half an hour to catch up to the error, by which time more than 12,000 absentee voters who have not yet returned their forms had inadvertently been fed misinformation.

• Most Katherine Harris-like figure. That would be Jon Husted, Ohio’s secretary of state, a Republican who tried to restrict early voting (which tends to favor Democrats), then tried to defy the courts when they told him he couldn’t. He has also tried to tighten the rules on casting provisional ballots, which also tend to skew Democrat, and maximize the chance that a vote could be invalidated for procedural reasons, even if the intent of the voter is crystal clear. He also approved a last-minute “experimental” software patch on tabulation systems used in 39 Ohio counties, ostensibly to reconcile local computer systems with the secretary of state’s office. Since software changes are usually required to go through a testing and certification process, this has raised red flags among those inclined to be suspicious of Husted’s motives. More on the implications of this in a moment.

• Most brazen disinformation peddling. Jeff Flake, a Republican running for the Senate in Arizona, sent a robo-call out to 120,000 households in the Phoenix area over the weekend directing them to the wrong polling station location. A significant number of those receiving the calls – we don’t now how many, exactly - were Democrats. Flake’s Democratic opponent, Richard Carmona, has asked the FBI to investigate.

• Most spectacular tech malfunction. A voter in central Pennsylvania filmed his own attempt to vote for Obama on an ES&S touchscreen machine, only to have the machine register the vote for Romney instead. The video subsequently went viral. (Although the problem was fixed almost immediately, by rebooting the machine.)

It’s easy to get depressed by this and a small avalanche of other reports spilling out around the country. So it’s worth pointing out that the situation is not quite as dire as some of the anxious reports bouncing around social media sites and the rest of the Internet have suggested, for a couple of important reasons.

First, things have improved enormously since the Bush-Gore fiasco in 2000. True, many state and county officials compounded the problem at first, by replacing the old punch-card machines with expensive computer touchscreens that were poorly programmed and prone to error if not also manipulation, and which provided no paper backup to allow for meaningful recounts. Since 2004, many of those same jurisdictions have gone through a serious case of buyer’s remorse and either added a paper trail function to the machines or ditched them altogether in favor of cheaper, more reliable optical scan systems that are recountable by definition because voters mark their choices on paper in the first place.

Many states (though by no means all) have also worked hard to improve their procedures from start to finish, making sure they have backup ballots available in precincts in case of mechanical failures, working harder to ensure there are enough machines in each polling station, tightening their vote-counting and cross-checking procedures, and so on. Interestingly, a report published in July by the Verified Voting Foundation, Common Cause and the Rutgers University Law School found that Ohio – site of so much controversy in 2004 – now has some of the best county-by-county voting procedures in the country.

Second, people are far more aware of the potential problems and are reacting to them as they arise. In 2000, voters only realized after it was too late that Florida did not allow provisional balloting (since introduced), and that the state had instituted a grossly flawed purge of convicted felons from the voter rolls, which ended up disenfranchising tens of thousands of eligible voters, most of them Democrat-leaning African-Americans. Now, everything – every attempt at passing restrictive legislation, every polling station set-to, every flier telling people that Election Day is Wednesday or Thursday – is subject to instant scrutiny. In many cases, the abuses create a backlash motivating people who might otherwise have stayed home or allowed the long lines to deter them, as was obvious in Miami-Dade county over the weekend when an attempt to bring early voting to a halt was thwarted by sheer people power.

Lawyers are also on hand in many competitive precincts, so abuses are either resolved immediately or publicized in ways that embarrass officials and lay the groundwork for seeking redress in court.

What happens, though, if the presidential race is closer than the final polls have been predicting and it comes down, as in 2000, to a few hundred votes in a single swing state? The state most likely to experience that sort of showdown is Ohio, and the good news is that the Buckeye State would probably weather the storm pretty well.

Whatever stunts Jon Husted might try to pull would be challenged in court, and his record with the courts suggests that there is a good chance he would be overruled on any attempt to prevent a full and fair vote count. The counties, for their part, are able to conduct recounts, either with the tabulation machines or by hand, and have ballot reconciliation procedures in place to spot any attempt to change vote tallies during the tabulation process.  In other words, even if that last-minute software patch were malicious, there would be a way to spot any skewing of the results.

Oh, and that report about Mitt Romney’s son having a financial interest in Hart InterCivic, the company that owns the machines operated in two Ohio counties, including the Cincinnati area? Those machines were purchased in 2005, long before the Romney investment in Hart’s holding company, and are operated entirely by the counties, not by the manufacturer.

More troubling, if a lot less likely, would be a race that came down to either Virginia, or Colorado, or both. The report by Verified Voting, Common Cause and Rutgers found significant problems in both states. Virginia is in the process of ditching its old computer touchscreen machines, but has not yet done so, so recounts would be impossible there. Colorado earned poor marks for its precinct management and ballot reconciliation practices. We can only pray, as election officials often do, that it won’t get that close.

Andrew Gumbel is a Los Angeles-based journalist and the author of "Steal This Vote: Dirty Elections and the Rotten History of Democracy in America," among other books.