Blown calls and misread tea leaves: We round up the biggest losers of punditry in 2012 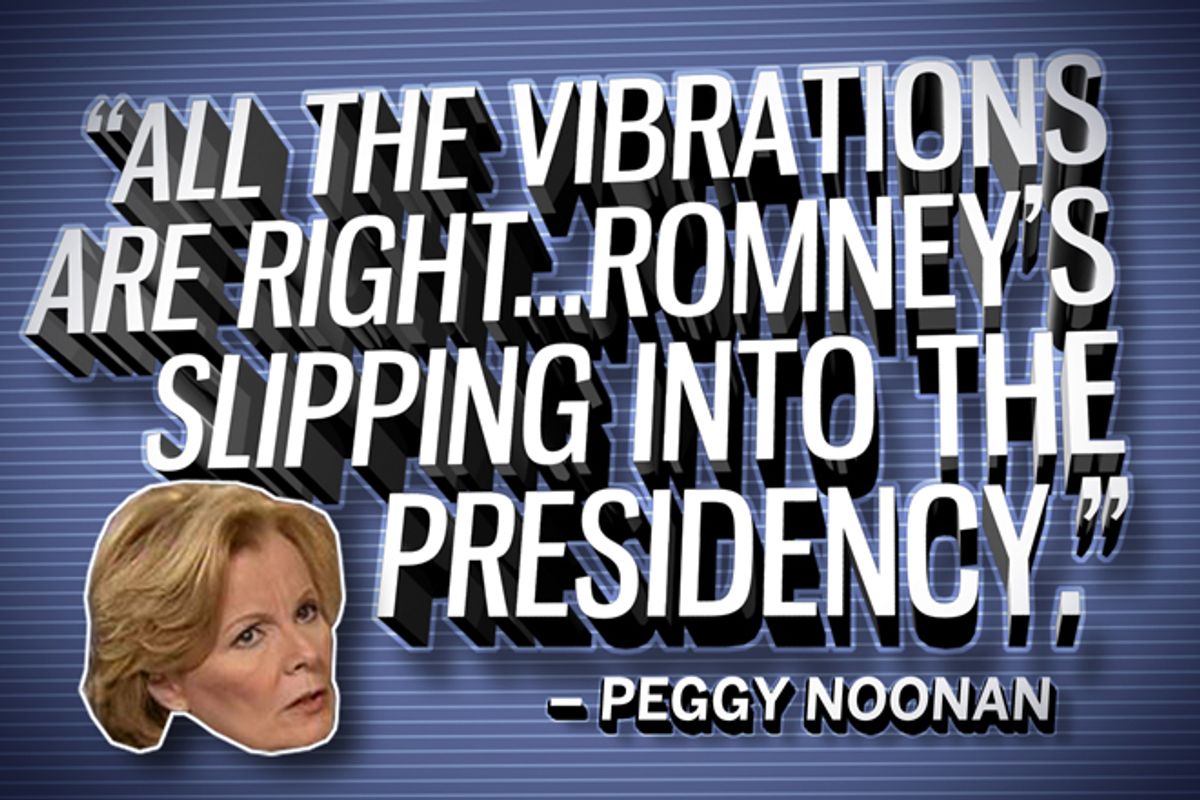 Barack Obama and Mitt Romney weren’t the only ones with something on the line last night -- America’s greatest treasures, its political pundits and talking heads, had their reputations at stake as they waited to find out if their predictions and prognostications turned out to come true. Unfortunately for a lot of them, especially for many on the right side of the political spectrum, things didn’t go so well. But fortunately for them, being good at predicting things seems to not be a requirement of being a paid political predictor, so their jobs are probably safe. Here’s your guide to fine men and women of the Sunday shows and the opinion section who will likely see zero negative impact for their false prophecies.

Mitt Romney is going to win!

This was, of course, the biggest class of pundit losers, and includes almost every conservative Tweeter, blogger, columnist, and TV analyst. Almost all, en masse and despite the polls, predicted a Romney win. And what do these pundits know that the polls don't? Wall Street Journal columnist Peggy Noonan explained, “All the vibrations are right.” How so? Romney is “stealing” the thing while “we’re not really noticing because we’re too busy looking at data." Her evidence: “yard signs” (there were apparently more for Romney than Obama), big Romney rallies, and “a person who is helping [Romney]” told her.

Karl Rove, also in the Wall Street Journal, also saw some mysterious forces at work not captured by the polls: "Mitt Romney will be declared America's 45th president. Let's call it 51%-48%, with Mr. Romney carrying at least 279 Electoral College votes, probably more." Bill Kristol, the editor of the Weekly Standard, wrote in a column headlined "Marvelous Mitt" that while it will be close, but, “As president, Mitt Romney will have the extraordinary opportunity to rescue America from the spirits of the shady night of a decadent liberalism.” Former Bush White House spokesperson Ari Fleischer thought Romney will win with “minimum 271 EVs,” but likely 309.  MSNBC host Joe Scarborough, writing in Politico, prognosticated: “My gut tells me there are two likely scenarios: (1) President Obama will squeak out a narrow Electoral College victory or (2) Mitt Romney will carry Ohio and be swept into office by a comfortable margin. After practicing politics for 20 years, I suppose I would rather be in Mitt Romney’s shoes than Barack Obama’s.”

Daily Caller Executive Editor David Martosko deserves special attention. He predicted Romney would win 296-244, including Pennsylvania, “partially because Hurricane Sandy will depress some turnout in Obama-friendly Philadelphia, and because the new Black Panthers have been warned this time.” 1) Sandy completely missed Philadelphia, 2) the Blank Panthers, really? We could spend all day on these, as it really includes almost every conservative pundit, but we have to get to...

Mitt Romney is not just going to win, but it'll be a landslide!

A special subset of those bullish on Romney, these pundits saw not just a victory but a VICTORY. Michael Barone, the conservative Washington Examiner's sober senior political analyst, made this prediction five days ago: “Bottom line: Romney 315, Obama 223.”

George Will, the conservative Washington Post columnist and ABC news analyst predicted an even bigger margin of 321–217. CNBC host Larry Kudlow on October 25: ”I am now predicting a 330 vote electoral landslide.” Newt Gingrich, speaking on on Fox News late last month: "I believe the minimum result will be 53–47 Romney, over 300 electoral votes, and the Republicans will pick up the Senate." Dick Morris, and perhaps it’s not even fair to include him on this list, predicted Romney would win 325 electoral votes, that Republicans would pick up six seats to win the Senate, and that they may even win Senate races in New Jersey and Rhode Island, where the Republican candidates were behind by 30 points. Libertarian Wayne Allen Root, who has a column on Fox News.com predicted a “100 to 120 electoral vote” and “a 5 to 7 point popular vote victory” for Romney.

The Romney campaign made head fakes towards the end of the campaign about capturing the blue state of Minnesota, and some pundits bought it, thinking there were enough people who want to prevent gays from getting married to put Romney over the top. “I guess the wild card...[is] Minnesota...there’s a marriage amendment on the ballot that will bring out the evangelicals and I think could make the difference,” Will said. National Review writer Kathryn Jean Lopez Tweeted in response, “George Will is right. Romney will take Minnesota, and on account of the marriage vote.” Even Minnesota Rep. Michele Bachmann got in on the fun: “George Will says #MNRed is a reality on #thisweek!” she Tweeted. Even HotAir blogger Ed Morrissey, who acknowledged that Minnesota is “a quadrennial sucker bet for Republicans” let the hope in, seeing the possibility of a “virtual tie.”  In the end, Romney lost Minnesota and the anti-gay marriage amendment went down in flames.

One of the most interesting developments of this cycle was inherent distrust of polling data, which conservatives began to disbelieve when it showed Barack Obama pulling ahead of Mitt Romney. At the center of all this was Dean Chambers, the proprietor of UnskewedPolls.com. So what was his final prediction? Romney 275, Obama 263. This was actually far more conservative estimate than earlier predictions, including one that had Romney winning 317 or even 359 electoral votes.

Perhaps sensing a threat to their guts’ monopoly on political predictions, a lot of pundits had serious beef with Nate Silver, the New York Times polling analyst. Michael Gerson, the former Bush speechwriter, penned an anti-science column in the Washington Post calling Silver “trivial” and a “trend taken to its absurd extreme.” “If political punditry has any value in a democracy, it is in clarifying large policy issues and ethical debates, not in “scientific” assessments of public views,” he wrote. Politico’s media reporter, Dylan Byers, led a one-man crusade against Silver, writing numerous blog posts attacking the analyst, suggesting he was “highly overrated,” and arguing that Silver would become a huge embarrassment to himself if Romney won (Silver, of course, merely predicted the probably being small of a Romney win).

So how did Silver do? His final prediction gave Obama more than a 90 percent chance of winning, predicting the president would capture 313 electoral votes. The president won, of course, and at this moment has 303 electoral votes, with Florida’s results still outstanding. In the Senate, Silver predicted Democrats would retain their majority with 52.5 seats. In the end, they most likely won 53 (Montana and North Dakota haven’t been called yet, but Democrats are ahead in both).

CNBC host Jim Cramer, who makes quantitative predictions for a living, predicted that Obama would win 440 electoral votes to Romney's 98. Not quite.

Americans Elect -- remember that? It was supposed to be a platform for third party candidates to win. “Write it down: Americans Elect. What Amazon.com did to books, what the blogosphere did to newspapers, what the iPod did to music, what drugstore.com did to pharmacies, Americans Elect plans to do to the two-party duopoly that has dominated American political life,” New York Times columnist Thomas Friedman wrote. Yeah, that never happened.

Until long after it was too late, conservatives upset with Mitt Romney were praying for a new candidate to emerge and for a brokered or contested Republican National Convention. Weekly Standard editor Bill Kristol, who never liked Romney much, led the charge here,  declaring that people like Rudy Giuliani were going to run when it was clear they weren’t, and holding out hope as late as December of last year. He was kind of sad when Romney won. Many mainstream pundits jumped on the bandwagon, excited about the prospect of a spectacle.

Trump all the way!

For a while, Donald Trump was playing a giant game of “I’m not touching you” with the GOP primary, but some pundits got duped into thinking he was actually going to run. Dick Morris, as Jim Newell wrote for Salon on the biggest pundit whiffs of the GOP primary (do read them all here), said that Trump had “a good shot at the nomination” and “could beat Obama.” Even generally stoic Washington Post columnist Charles Krauthammer got snookered. “It convinced me that he’s running, that it’s not just a feint,” Krauthammer said on Fox News after speaking with Trump on the phone.

The candidates that weren’t

George Will again, this time in May 2011: “I think we know with reasonable certainty that standing up there on the West front of the Capitol on Jan. 20, 2013, will be one of three people. Obama, [former Minnesota Gov. Tim] Pawlenty and [Indiana Gov. Mitch] Daniels. I think that’s it.”  Then there was the Texas Gov. Rick Perry boomlet. Everybody (including this political observer) thought Perry would steamroll the rest of the candidates and capture the GOP nomination. How wrong we were. Perry turned out be wholly unprepared for the primetime and too friendly to immigrants for the modern Republican Party. To quote Perry: “Oops.” Likewise, as Newell documents, there was the media love affair with Jon Huntsman, who had no shot of winning the nomination, and occasion punditry boostings of Bachmann and Herman Cain’s campaigns. Newt Gingrich, while not exactly a pundit, predicted his own success succinctly: “I’m going to be the nominee. It’s very hard not to look at the recent polls and think that the odds are very high I’m going to be the nominee.”

The biggest loser of them all

This dubious award has to go not to a pundit, but a pollster, and a well respected one at that: Gallup. For weeks, Gallup was way out of step with every other poll in the country, and then, after being offline for several days because of Hurricane Sandy, came back right before the election with a prediction closer to the consensus. The poll erred in 2008 and 2010 as well. In 2008, Gallup put Obama up 11 points over of John McCain on the eve of the election, while the polling average had a narrower seven point spread. Obama won by seven points. In 2010, Gallup put Republicans ahead by 15 points on the generic ballot, while the average had the GOP up of 8 or 9. Republicans took the house by about seven points on average. For one of the country’s most respected pollsters, three elections wrong in a row is unacceptable.