The creaking noise you hear? It's the sound of conservative white men trying to fight off change -- and failing 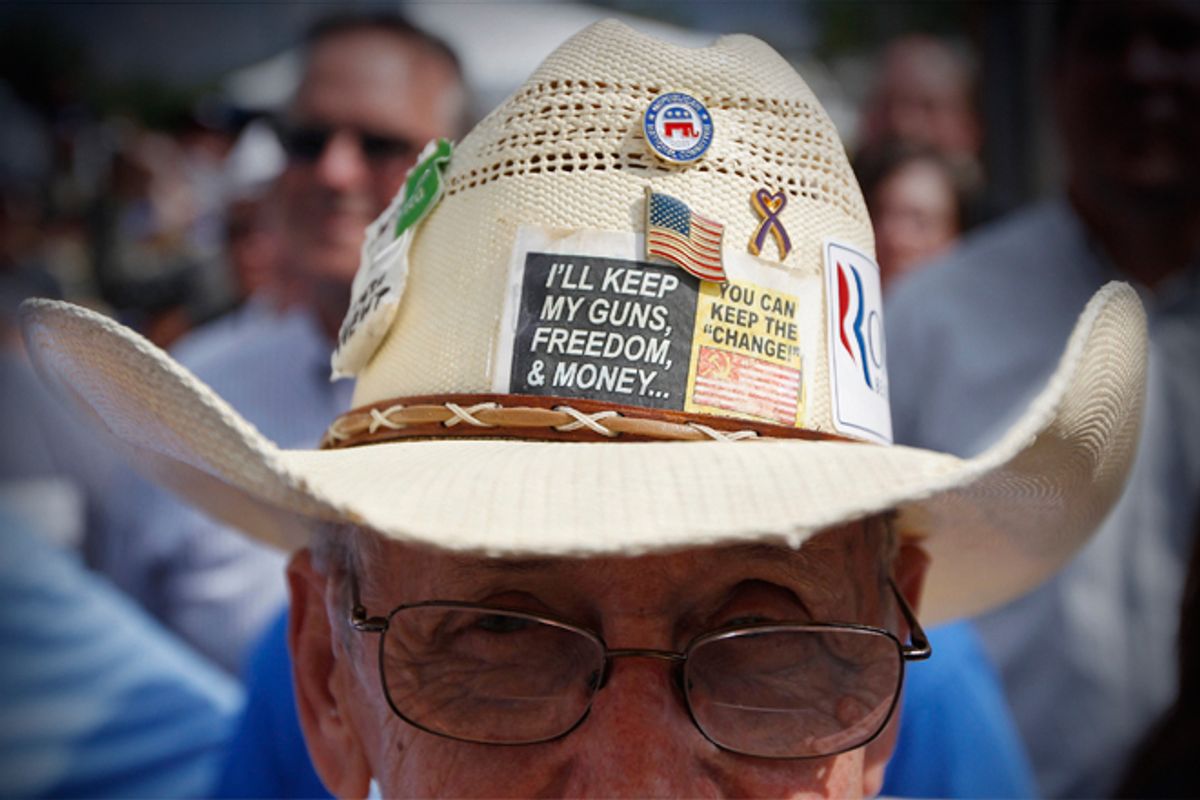 "Obama wins because it's not a traditional America anymore," Bill O’Reilly said on Fox News last night.  "The white establishment is the minority. People want things."

Just listen.  That creaking, cracking noise you hear — not unlike a rusty forklift — is the sound of conservative straight white men trying to fight off change. But, as we saw last night, change is rolling over them.

The whoppers emerging from some candidates’ mouths were so outrageous I couldn’t even catalog, never mind rank, them all.  A woman’s rape could be God’s plan, said Richard Mourdock. Todd Akin explained “legitimate rape” to voters.  “I’m not concerned about the very poor,” said Mitt Romney, later dismissing half the country as “victims.”

Tempting as it may be, it's a mistake to scapegoat these hapless candidates or dismiss their unvarnished comments as aberrations. Rather, they speak to a reactionary confusion that is gutting the GOP, and to a larger conflict over the meaning of America.

I have traveled this country extensively, before and during the election campaign, speaking to whites about their political values, most recently in various swing suburbs in Ohio the weekend before the vote.  The vast majority of straight white men I encountered were reasonable, thoughtful voters. And here's an irony: Much of the GOP — think Romney, Mourdock, Akin — cling to a political narrative according to which white male voters are "conservative" and "minority" voters are "liberal," and where white male voters are self-sufficient and everyone else is dependent.  It’s exactly this form of white-on-white racial profiling, a fear of the future, that produced the election’s outrageous comments about unions, the poor, rape, women, minorities and the like.

Why did conservative straight white men self-destruct so spectacularly this election? Perhaps because, in trying to secure the votes of other white men, they failed to notice that these white men have mothers, daughters, gay relatives and/or friends who are racial minorities; and that other white men are suffering economically; and that straight white men can also embody the country’s dramatic change? The cheap, divisive, nativistic, racialized ways that conservative leaders divvy up the electorate has now come to spook them. It’s a vicious loop: What this political narrative does is to fuel a further sense of embattlement and decline among disenfranchised straight white men.

But here's the thing: Many -- perhaps most -- straight white male voters are ready to embrace the 21st century; but a great many others are kicking and screaming. The irony is not lost on me.  While in Ohio this past weekend, the only shouting and hostility I encountered from a white male voter was a man hurling unprintable epithets about the president.  On the lawn in front of his crumbling single-family rambler, I noticed a sign that read “Stop the War on Coal.”

Like whiteness itself, once stable, reliable institutions are perceived to be “broken”: the nuclear family, the classroom, the “border,” the economy and the very nature of work.  Little wonder all the venom flew as conservative straight white male candidates flailed while facing a dramatically changing country and electorate.

And now the Republicans should realize it is their own party that is broken.  The politics of alienation is not an agenda.  If such politics cannot win during such a tenuous economic backdrop, it's unlikely to ever again.

Young voters, women, blacks, Asians, Latinos and our white allies: Witness the growing coalition uplifting the Democratic Party.  The president defended his recent political record, but pivoted the election between a stark choice: the past versus the future.  Forward, he insisted. The war on voting rights; the war on immigrant rights; the war on union rights; it’s not just about decimating Obama’s base, it’s about consolidating corporate power, and keeping the majority’s privilege intact.

This election unfolded against this backdrop, what I call “The White People Deadline”: 2042. As this cultural “time bomb” ticks, fear mounts over a perceived loss of whites’ raw power – demographic, social, economic and political. So the debates raged on, including over women’s reproductive rights.  Often racially coded, these contraceptive and abortion political clashes are a proxy debate for whites’ demographic viability.   The political parties scrambled to consolidate their appeal to white voters even as they scramble to compensate for the decline of white voters.  A new white upper class and a declining white lower class are diverging so vastly in core values and behaviors, writes Charles Murray in "Coming Apart: The State of White America, 1960-2010," that they "barely recognize their underlying American kinship.” Murray’s much-discussed tract essentially yokes a decline of social values and of “whiteness” to an entire demographic’s “failure” to cope with a challenging future.

Coming apart?  That doesn’t just describe the widening gulf between the prospects of rich and poor whites.  It describes the firewall straight white conservatives are trying to erect against the future.  The hapless candidates railed away against their sense of decline, marching to defeat at the polls.

The lesson for conservatives isn't to fight harder against the change.  It is to surf it.  The GOP not only failed to diversify its base; it needs to rethink its assumptions about straight white men in the first place.

Rich Benjamin is author of  "Searching for Whitopia: An Improbable Journey to the Heart of White America," and a senior fellow at Demos, a research and advocacy organization.