It turns out Karl Rove is a terrible political analyst 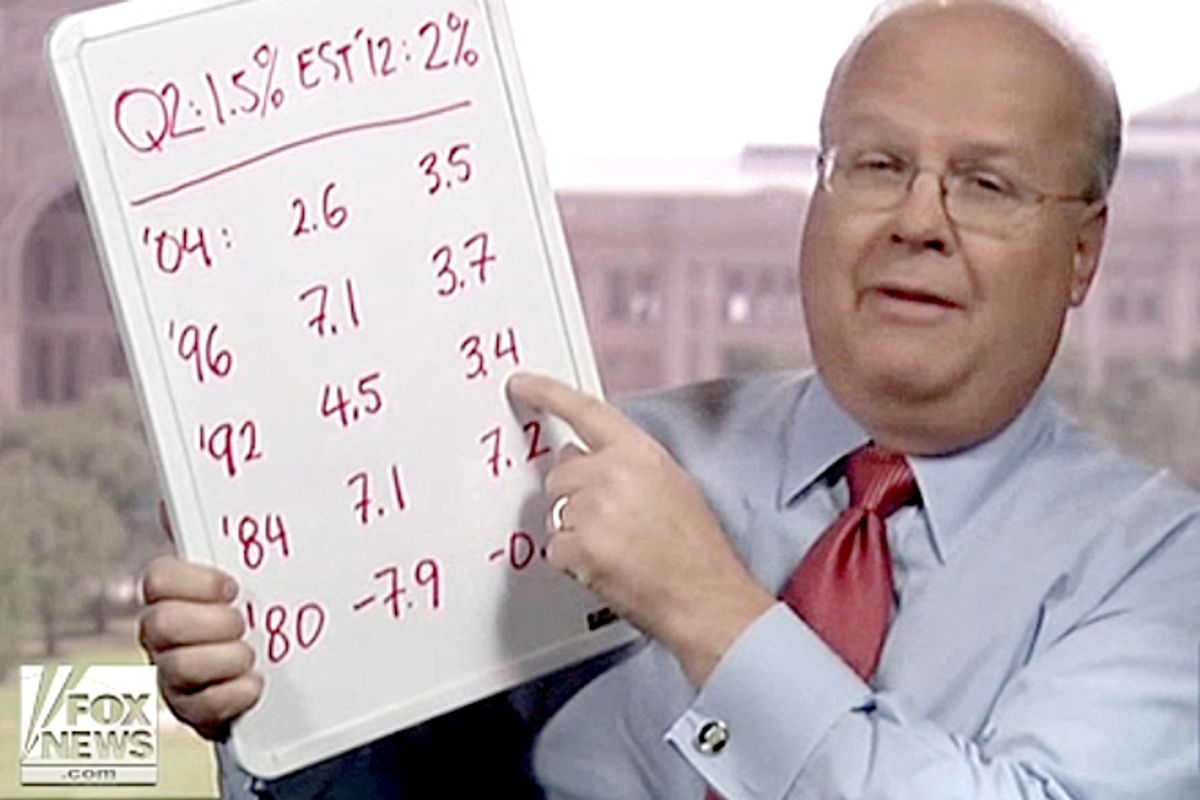 To some he's a hero, to others a villain, but everyone -- right, left, and center -- seems to agree on one thing about Karl Rove: He’s really really smart. Rove is, most political observers assume, one of the savviest operators in politics today, so when he speaks, people listen. After Citizens United and the 2010 GOP wave, when Rove ruled Washington from his non-perch at American Crossroads, I saw more than one very smart liberal go from mocking Rove as a liar and hack one minute to having the blood drain from the face when he made an ominous political prediction the next. Such is the power of the Rove.

Or at least it was. Tuesday night may have shattered the Myth of Rove, just as it shattered Rove himself when he had a meltdown in front of millions on Fox News viewers after the network called Ohio for Obama. The moment, which has since gone viral, was the perfect encapsulation of Emperor Has No Clothes realization that Rove is now experiencing. Rove was proven wrong. On live TV. By Fox News. And of course, that wasn’t the only thing he got wrong. He blew the whole election, predicting Romney would win.

But if you take a look at Rove’s record of prognostications, this should be no big surprise. Before Tuesday, Rove's most famous wiff came in 2000, when he predicted that George W. Bush would beat Al Gore in a landslide. Rove predicted Bush would get “in the vicinity of 320 electoral votes" and even suggested that Bush had a shot at deep blue California. “I mean, the governor is going to start off in New Mexico, spend a day and a half in California, go to Oregon and Washington, go to Minnesota, go to Iowa,” Rove told CBS News host Bob Schieffer. Of course, 2000 came down to nail biter, with Bush winning 271 votes -- just 1 more than necessary to win -- and losing the popular vote (later, it turned out that Gore probably actually won).

He was so chastened by the blown call that when reporters asked him to make a prediction the night before the 2004 election, he refused. "Rub my nose in it," Rove snapped at a reporter who brought up the 2000 prediction. “With a circle of tape recorders humming, Rove said he was making no such predictions this time around,” the New York Times reported on November 1, 2004.

After the election, Andrew Sullivan was actually prescient about this on CNN: “He didn't get a majority of the popular vote in 2000, he squeezed a 51 percent victory in 2004. He's been teetering on the brink ever since, and the base strategy now shows him not to be a genius but to be a real failure.”

But two years later, Rove was back to wildly miscalculating results. “Look, I'm looking at all these Robert and adding them up. And I add up to a Republican Senate and a Republican House. You may end up with a different math, but you're entitled to your math. I'm entitled to ‘the’ math,” Rove said in a testy exchange with NPR host Robert Siegel the week before the 2006 election. Democrats ended up winning a huge wave that gave them control of both the House and Senate.

For conservative donors who entrusted millions with Rove and his American Crossroads groups, only to see a 1 percent success rate, the Rove bubble is bursting. "There is some holy hell to pay. Karl Rove has a lot of explaining to do … I don't know how you tell your donors that we spent $390 million and got nothing,” a donor told John Ward. "The billionaire donors I hear are livid.”

If Rove needs something to do, perhaps he could join his former boss George W. Bush -- in obscurity.