What Obama needs to do now

Invest in infrastructure. Support unions. Protect medicare. Obama needs to fight for those that got him reelected 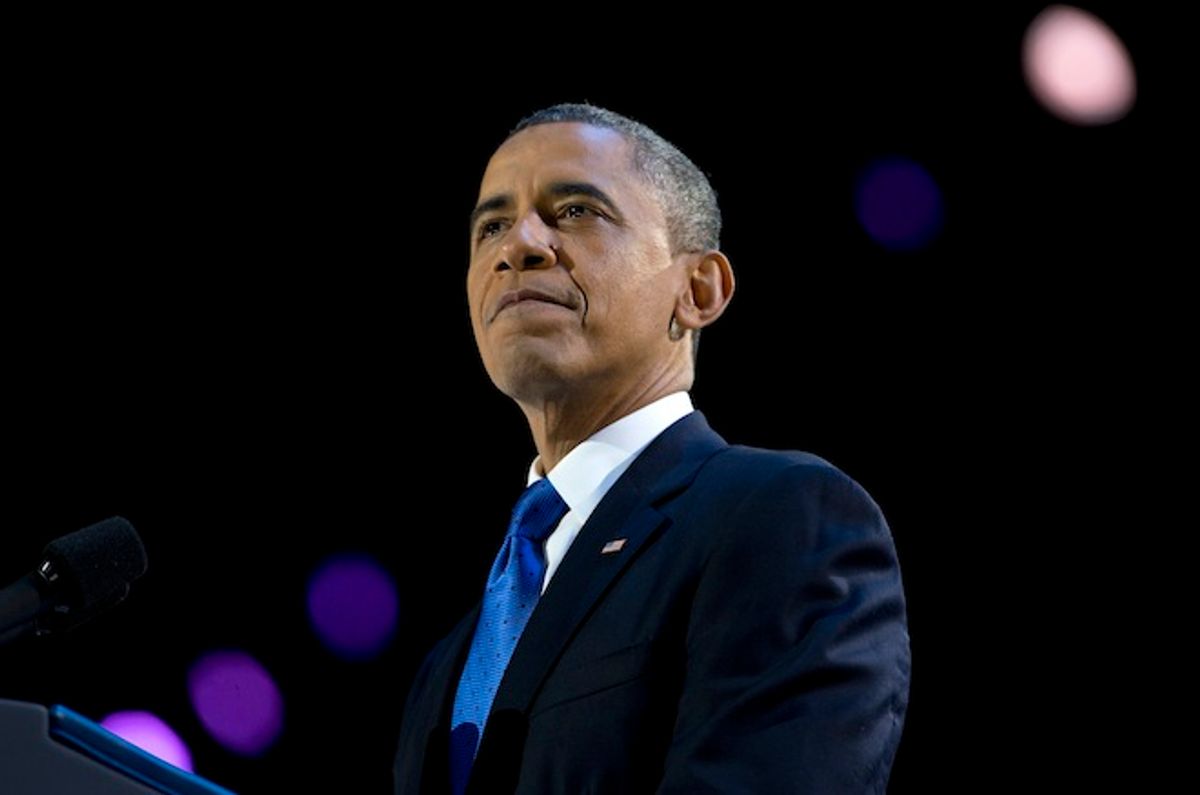 From the start of the campaign, Republicans claimed the election would be a referendum on the economy. They were right—but not in the way they hoped. Voters ended up choosing a weak but improving economy over a GOP program of economic austerity that entailed slashing the safety net, cutting investments in basic public goods, and threatening the future security offered by Medicare and Medicaid.

Yet the epic battle over our nation’s economic future is only now being joined. With tax cuts expiring and automatic spending cuts threatening to derail a still-halting recovery, the coming months will witness a fierce debate over tax and budget priorities that will pit Democrats in the White House and the Senate against Republicans in the House.

The stakes could not be higher. Immediate austerity would not simply lead to economic reversal. It would rule out major investments in our economy’s productive capacity and major upgrades of our country’s framework of economic security. President Obama needs to move quickly to define the upcoming debate around the central goal of restoring an economy and democracy that works for the broad majority of Americans.  In doing so, he would not only be honoring those who returned him to the Oval Office, but also supporting the only realistic plan for American economic renewal.

Despite the improving economy that helped lift President Obama to victory on Tuesday, our nation remains mired in chronic joblessness and anemic growth. More than twenty million Americans are unemployed, underemployed, or have given up searching for work altogether.

The program of austerity that Republican leaders support will unquestionably make these problems much worse. The recent experiences of European nations, as well as our own slow recovery in the face of state budget cuts, indicates that countries that have responded to the financial crisis with austerity measures have faltered badly.

Instead, President Obama should immediately call for passage of a major program of infrastructure investment, isolating congressional Republicans who have so far blocked every attempt to relieve state budget crises or rebuild our nation’s crumbling infrastructure. By upgrading roads, bridges, and other essential physical capital with high rates of return, the federal government can both put millions of Americans back to work and lay the groundwork—literally—for future growth.

Yet isolating House Republicans isn’t the only political challenge. A significant number of Democrats—sometimes, it seems, including the President himself—have already committed themselves to what might be called “austerity lite”: modest tax increases on the rich, combined with less draconian but still large (and deeply unpopular) cuts in public investments and the guarantees offered by Social Security and Medicare. While more balanced than GOP plans, these proposals wrongly treat stabilizing our debt as an end in itself, rather than as part of a larger set of reforms to strengthen the middle class, reduce inequality, and foster broadly shared prosperity.

After all, recovering from the financial crisis, while the first policy priority, is just one big challenge our economy faces. Over the last generation, the United States has experienced growing inequality and a shrinking middle class and, relatedly, fallen behind our competitors in encouraging advanced education and ensuring upward mobility. At th same time, we have failed to aggressively tackle long-term environmental and energy challenges that threaten economic growth as well as the future of our planet.  An agenda for economic renewal has to address these problems as well as get the economy moving again.

In a recent report, “Prosperity Economics,” we argue for three main priorities to accomplish these goals: investments in human and physical capital; basic economic security for middle-class Americans buffeted by a more volatile job market; and political reforms that reduce the sway of money in elections and governance. Growth, security, and democracy—these are the three pillars of a strong middle class, and they should form the foundation for Obama’s second term.

Prosperity economics begins with serious public investment, and this is where Obama and congressional Democrats should start as well. Infrastructure is only the most obvious target. The United States should also be making large-scale investments in science and technology, especially clean energy. This means everything from research grants for basic material science to loans to help commercialize early-stage clean-technologies. Notwithstanding GOP denials that government has any role to play in creating prosperity (remember “we built it”?), many of the most important commercial breakthroughs of the past century, from aviation to the internet, were fueled directly or indirectly by public investments. With these investments now dwindling, we’re in danger of stalling on the global economic highway.

Key to this project is an educated workforce prepared to seize new opportunities in a rapid-change economic world. Obama’s agenda during his first term focused on improving K-12 performance. Going forward, we will need stronger measures. The President should call for universal pre-K education, which not only carries eventual benefit-to-cost ratios that may be as high as 8-to-1 but also helps parents of young children return to the labor force. He should also work to provide a firm guarantee from the federal government that every qualified student can attend and graduate from college.

Enhanced and more flexible forms of economic security should also be part of the bargain. Contrary to much rhetoric on the right, economic security for working families plays a critical role in encouraging innovation and economic growth.  Like limited liability for corporations, portable risk protections provide a foundation for risk taking, entrepreneurship, the acquisition of skills, and active participation in the workplace.  In a globalized economy, workers are more, not less, in need of health care that moves from job to job, a secure retirement plan on top of Social Security, and paid family leave that allows parents to balance labor force participation and investing in their children.

None of this is to say that federal deficits should be ignored. Today, with interest rates at near-record lows and joblessness still rampant, the first priority should be getting Americans back to work and investing in future growth. But over the long term, a prosperity agenda depends on a stabilized debt. The risk, however, is that a fixation on deficit reduction will lead to unnecessary erosion of our country’s productive potential and the basic economic security of American workers and families.

Leading members of both parties have converged on the idea that substantial benefit cuts in “entitlements”—the current code word for Social Security, Medicare, and Medicaid—will be needed to restore fiscal balance. But this is simply not true. Social Security is budgeted for outside of normal government operations, and relatively modest adjustments can make it sustainable, including increased revenues from affluent Americans whose incomes are increasingly above the level covered by payroll taxes.

Medicare and Medicare pose bigger challenges, but here we can build on the government’s superior performance in controlling costs relative to the private sector while drawing on the successful experience of other rich nations, which spend roughly half what we do per person on average, with generally better health outcomes. A serious effort to tackle health costs system-wide, including a Medicare-like public option for those younger than 65 and an enforceable budget for Medicare spending, would allow Medicare and Medicaid to remain sustainable without shifting costs and risks onto senior citizens, cutting off coverage for millions of low-income Americans, or providing trillions in giveaways to private insurance companies, as the GOP approach would do.

Alongside control of health costs, a few other major reforms can put us on firm fiscal footing for the indefinite future: reductions in our bloated defense budget; the elimination of subsidies for industries with large negative externalities, such as fossil fuel; and the restoration of a fiscal base devastated by round after round of tax cuts focused on the rich. President Obama should set the tone by indicating clearly to his party and to Republicans that cutting popular programs of economic security—more vital than ever as private workplace benefits have eroded—should be the last option, not a first.

If there’s public support for an agenda built around growth-oriented investments and economic security, why does the austerity agenda remain so powerful? The answer lies in our distorted political system—a final area where Obama and congressional Democrats must focus their efforts. The agenda we outline can only be achieved by working to undo the corrosive impacts of money-driven politics and the rampant gridlock that have weakened the responsiveness of America’s leaders to the middle class.

Unions must be an important part of this effort, serving as a check on managerial self-dealing in the market and excessive corporate power in politics.  But Obama and congressional Democrats also need to embrace publicly financed campaigns and further restrictions on lobbying, as well as reform of congressional procedures, like the filibuster and debt-ceiling vote, that give disproportionate weight to the views of intense, anti-tax minorities. Democrats have to be seen as the party of political reform, not just the party of government, especially when that government is too often captured by private power.

It will not be easy. Neither the election returns nor the economic facts are likely to deter House Republicans from their reflexive opposition to anything and everything the White House puts forward. To succeed, President Obama will have to bring his party together under a single banner and take the debate to the American people with more force than he’s mustered in the recent past. The rewards, however, are far greater than the risks. By boldly advocating a forward-looking agenda of growth, security, and democracy, President Obama can lay the foundations not just for a successful second term but for a stronger, fairer, and more resilient economy. As much as anything he has done so far, the coming struggle will determine the fate of his presidency—and the future of the American middle class.