Big Money lost the battle, but the war goes on

Huge-spending GOP super PACs failed to swing the election. But they'll be back, smarter and stronger than ever 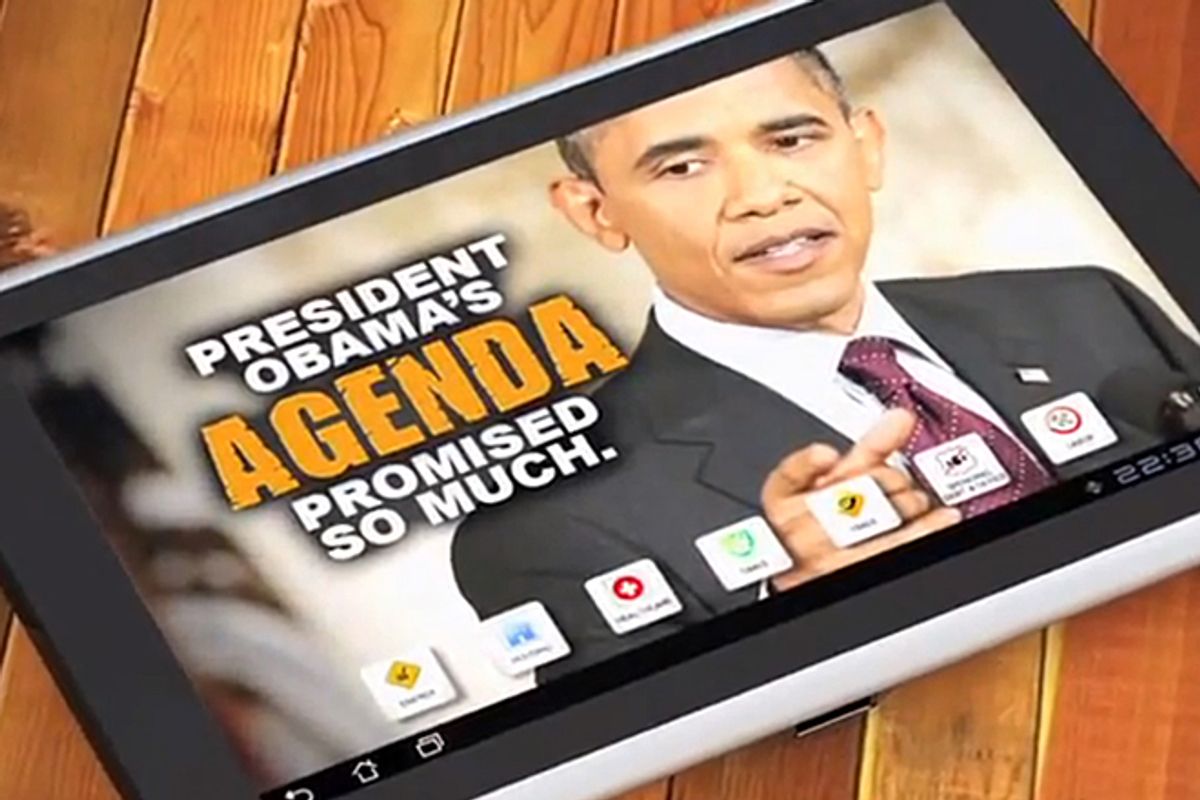 “Never before has so much political money been spent to achieve so little,” the Washington Post’s Dan Eggen and T.W. Farnam wrote in their big A1 story yesterday. “Spending by outside groups, it turns out, was the dog that barked but did not bite.” You can find a similar narrative in the New York Times, Politico, the Wall Street Journal and pretty much everywhere else.

And indeed, Tuesday was a terrible no good awful night for most of the biggest super PACs and other assorted "outside" groups, as most of them are Republican-aligned and Republicans lost big. Hundreds of millions of dollars down the drain and with nothing to show for it.

So, good news for Democrats and campaign finance reformers, right? We all feared that unlimited money would buy the election and make it almost impossible for Dems to win. But that's not how things turned out.

And yet! While 2012 was an embarrassing rout for conservative money groups, there’s no reason to believe the same will be true in two, four or six years. Democrats got lucky this time; don’t count on the bullet missing again.

"I was glad to see the American people reject so many of the negative arguments we heard from dark money groups like Crossroads GPS this year, but this is no time to let down our guard," Sen. Sheldon Whitehouse, a Democrat from Rhode Island who has been leading his party's fight against outside money, told Salon. "Hundreds of millions of dollars were spent this year in secret, and this unlimited dark money forced candidates to focus more and more on responding to often misleading attack ads. By allowing billionaires and wealthy corporations to continue spending secretly in our elections, we are leaving our democracy vulnerable to the type of corruption that should never be tolerated."

This is not to deny that the Obama campaign and the Democratic Senatorial Campaign Committee ran strong campaigns -- by all accounts they ran unprecedentedly smart and effective ones -- but they had a few things going for them this year that almost certainly won’t be true next time.

In the Senate, Democrats got lucky when two Republican candidates self-immolated on rape comments, and in general, Republicans simply failed to recruit serious candidates. Nowhere was the conservative outside money advantage more apparent than in Ohio's Senate race, where GOP super PACS spent $60 million, but the Republican candidate, State Treasurer Josh Mandel, turned out to be an almost comically inexperienced and weak candidate. Democrats had 21 seats to defend and should have lost control of the upper chamber, but Republicans blew almost every opportunity to pick up seats and failed to defend safe ones like North Dakota and Indiana. We have to assume they’ll learn their lessons and won’t mess up so badly next time.

In the presidential race, Democrats had an enormously charismatic figure, who, however much his luster might have faded over the past four years, is an unusually strong fundraiser and thus uniquely capable of withstanding the outside money onslaught. Remember, in 2008 Obama became the first candidate in history to forgo FEC public financing because he knew he could raise more, thanks to an army of small donors to complement the big checks. While John McCain was stuck with the $84 million given to him from the public campaign fund, Obama spent $315 million. This year, Romney opted out as well and easily erased Obama’s advantage. It’s hard to imagine a candidate less exciting than Obama -- as the next one, with the possible exception of Hillary Clinton, is likely to be  -- managing to raise the $1 billion necessary to match their GOP opponent. Obama also benefited from incumbency, which gave the president huge fundraising and structural advantage that the Democratic nominee in 2016 will not have. So in many ways, Obama’s win was an outlier.

Obama also arguably benefited from Republican mismanagement when it came to outside money. The main super PAC backing Obama, Priorities USA, keenly aware of its resource disadvantage, was careful to spend its money wisely. Its ads, focused almost entirely on hitting Romney on his time at Bain Capital, were widely considered to be some of the cycle’s best, thanks to rigorous testing and constant recalibration based on ceaseless polling. Even GOP pollster Frank Luntz had high praise: "That ad alone has killed Mitt Romney in Ohio,” he said of one memorable production. Meanwhile, American Bridge, a liberal super PAC and 501(c)4 group dedicated exclusively to opposition research, got huge returns on its investment by digging up devastating info on GOP candidates and spreading it to reporters. Akin’s “legitimate rape” comments? That was them. Romney’s $300,000 speaking fees, which he called “not very much”? That was them too, along with countless other major blows, some of which you may never know about, because American Bridge didn’t take public credit.

Meanwhile, Republican-aligned committees may have had more money, but they also spent it more poorly. Restore Our Future, the main super PAC backing Mitt Romney, spent $100 million but produced zero memorable ads and lurched from one message to another, none really sticking. The same went for the biggest player in the outside money world, Karl Rove’s Crossroads groups, which spent $300 million for a 1 percent return on investment, according to a Sunlight Foundation analysis. Where was the response to the attacks on Bain? Where was the ad showing hundreds of Staples workers thanking Mitt Romney for their jobs? It never came. "They missed the most important role they could have had: saving Romney's back when he was being attacked," Priorities head Bill Burton said.

And there was nothing comparable to American Bridge on the right. The thought among the outside groups seemed to be, with so much money, it didn’t matter how they spent it. The same could be said of the Romney campaign itself, with such high personnel costs and exorbitant consulting fees, that it had half the staff of the Obama campaign. But considering the heat Rove is now taking from the people whose money he wasted, we have to assume they won’t make this mistake again next time.

"It’s not always going to be the case that the Republicans have an incompetent campaign and the Democrats have a good one,” the ALF-CIO’s Jeff Hauser told Salon.

Then there are some major structural issues that helped Democrats, but may not always exist in the future -- chiefly, the fact that candidate committees get huge discounts when it came to buying ads compared to outside groups. Again, this meant that the Obama campaign could get more bang for its buck than could Restore Our Future or Crossroads, which had to spend up to eight times as much for the same ad space as Obama. The Romney campaign itself also erred in the way it raised money, with the consequence that it couldn’t take full advantage of lower rates. Thanks to this policy, the Obama campaign was able to purchase fully half of all political ads aired this cycle.

Again, we have to assume the Republican candidate in 2016 will not make the same mistakes; and anyway, there’s a chance the discount rule could be gone by then. Conservative activist lawyers like Jim Bopp have made it a crusade to challenge in court campaign finance regulations wherever they exist, and given how critical this rule was in leveling the playing field for Obama, you can bet they’re trying to figure out some way to take it down.

Moreover, the Democrats' win shouldn't obscure the fact that the campaign finance system itself is terrible, even if it doesn’t always produce terrible results. “It's still not good to have six- and seven-figure checks rattling around the system, because there’s going to be some kind of corruption,” Public Citizen’s Taylor Lincoln told Salon. “Stuff will happen.”

And fundraising is only becoming more important for all candidates, said Nick Nyhart, president of Public Campaign. "The impact of super PACs wasn't that they could buy races, it's about the arms race for campaign cash they fueled. These groups force candidates to spend more time raising money from deep-pocketed donors just to keep up." That means less time for governing and more time listening to the concerns of rich donors.

Perhaps the best thing we can hope for from Tuesday night's results when it comes to outside money is that the mega-donors will be disenchanted and won’t give again, or at least not at the same astonishing level. Or maybe they'll realize that there are diminishing marginal returns to political ads, whereby after a certain point more money doesn't really matter. Liberal billionaire George Soros spent $24 million trying to defeat George W. Bush in 2004, but after Bush won, he basically dropped out of electoral politics. It would be a good thing if Sheldon Adelson and the others were to do the same. But don’t count on it. And besides, there are plenty of other billionaires waiting in the wings.