GOP leaders want to moderate the party's immigration policy, but first they'll have to deal with their base 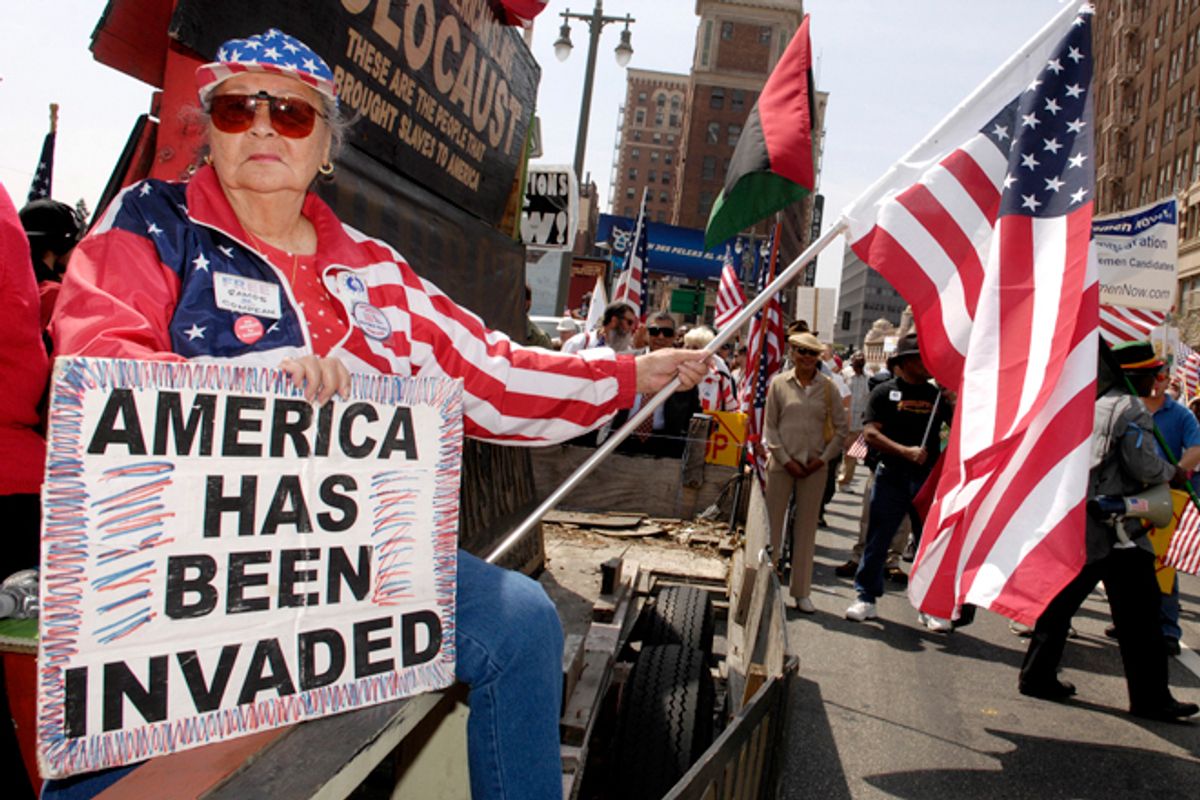 After getting trounced Tuesday, thanks in large part to lopsided Latino support for Democrats, some Republican leaders are having a bit of a come-to-Jesus moment and saying for the first time they need to moderate on immigration policy to win back Hispanic voters. Speaker John Boehner, along with pundits Sean Hannity and Charles Krauthammer, have been leading the charge. But as Steve Kornacki noted this morning, there’s a real chance the hard-liners and nativists in the GOP base could sabotage this strategy.

Indeed, the response has already been as swift as it's been blunt.“I think what you’re seeing now is desperation on the part of the Republican Party. And when people get desperate, they tend to do things that don’t quite make much sense,” Ira Mehlman told Salon. He’s the spokesperson for the Federation for American Immigration Reform, which has been at the center of conservative immigration thinking, helping to promote laws like Arizona’s SB-1070 and its author Kris Kobach, who works for FAIR’s legal arm. “My message to the Republican Party is: Don’t act of out of desperation ... by simply embracing the same position that the Democrats are embracing. They’re only going to be digging the hole deeper for themselves.”

Even fellow lawmakers are sounding the alarm. “I’m concerned that Speaker Boehner is getting ahead of House Republicans when he commits to getting a ‘comprehensive approach’ to immigration taken care of ‘once and for all.’ There’s been zero discussion of this issue within the conference,” Louisiana Republican Rep. John Fleming  said in a statement sent to reporters. “Obama voters chose dependency over Liberty. Now establishment R's want citizenship for illegals. You can't beat Santa Claus with amnesty,” Iowa Tea Party favorite Rep. Steve King wrote on Twitter.

At Breitbart.com, the site’s editor Joel Pollak responded to Boehner and Hannity by declaring, “No, amnesty is not the answer.” “Republicans will alienate core supporters -- immigrants among them -- who support the party because of its professed commitment to the constitution, the rule of law, and fighting crime,” Pollak wrote.

Some of Sean Hannity’s fans revolted against his announcement. “Sean it is over for the G O P you are talking amnesty/dream act,” one wrote on Twitter. Hannity must be “sipping the Obama kool-aid,” tweeted another .

Rush Limbaugh told his 15 million listeners yesterday that softening on immigration is a “trap.” “I really don't believe what I just heard on Fox News, the sound bite that we played, that we've gotta go for amnesty ... That is such a misreading,” Limbaugh explained.

And it’s easy to see why; just look at the polling. A CBS News poll from August found that a majority of Republicans -- 54 percent -- want to change birthright citizenship for children of undocumented immigrants. A CBS/New York Times poll from May found that 70 percent of Republicans support Arizona’s harsh immigration law. The same poll found that fully 71 percent of Republicans say that illegal immigration is a “very serious” problem, while another 20 percent said it’s a “serious” one. A slight plurality of Republicans said that immigrants on balance “cause problems” as opposed to “contribute” to society (Democrats said the opposite by almost a threefold margin), according to a CBS poll from April. (All polling data via PollingReport.)

When President Obama announced this summer that his administration would give young undocumented immigrants who met certain requirements a path to legalization, Republicans overwhelmingly rejected it. Just 29 percent supported it, while 64 percent opposed the new deferred action, according to a Quinnipiac poll from July. If Republicans so strongly oppose that move, the most incremental and conservative step toward reform possible, how will they support a more fundamental departure from the status quo?

And we need only look at the past year to see examples of the danger the GOP establishment faces from its base. Remember, it was Rick Perry’s relatively soft stance on immigration that nearly single-handedly killed his shot at the nomination. More than the “oops” moment, which came later, it was Perry calling his GOP opponents “heartless” for opposing in-state immigration for undocumented immigrants that sunk him among Republican primary voters. Sen. Marco Rubio, who is supposed to be the party’s great salvation on immigration reform and Latino voters, faced his own backlash when he proposed a less-than-draconian solution to deal with undocumented students.

And it’s worth noting that up to this point, one of the biggest criticism from conservatives of Democrats’ support for immigration reform has been that they are doing it for cynical political reasons. Now they’re nakedly doing that, a kind of double standard that may not sit well with the base.

It’s clear to pretty much everyone that Republicans need to do something about their “Latino problem” -- everyone, that is, except for perhaps most Republicans.