How Obama can turn a campaign into a movement

In his first term, the president largely ignored his most energized supporters. He can't make that mistake again 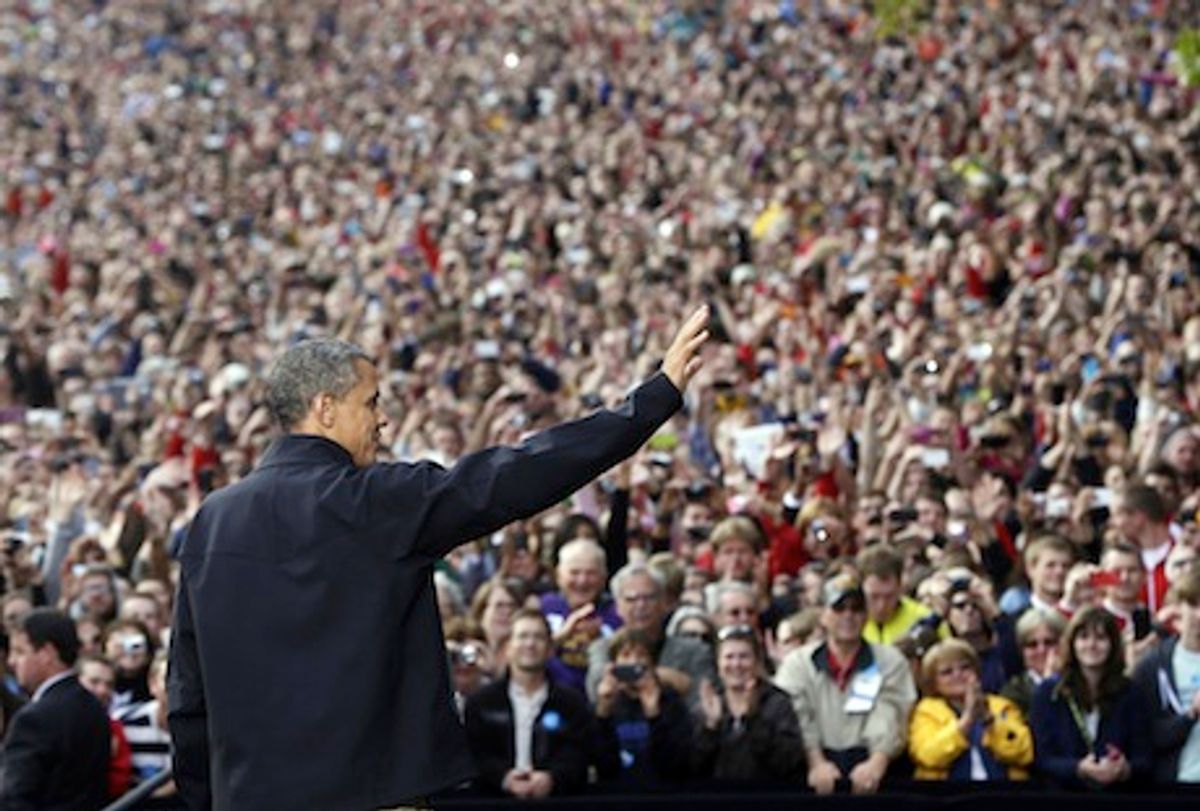 After the 2008 election, President Obama actively chose to not turn his broad and energized base of supporters into an independent force for change in America. So, for the last four years, when Obama desperately needed a fiery but loyal liberal movement helping tilt the wind toward his sails, he was instead isolated and stranded. The next four years do not look to be any easier for the president politically. This time around, if he hopes to succeed where he has struggled in the past, his supporters should be actively mobilized, not sidelined.

Since the 2008 election, President Obama has been widely criticized (including by yours truly) for demobilizing his electoral base, funneling his massive volunteer and voter outreach operation into the bowels of the Democratic National Committee instead of encouraging and allowing it to thrive as an independent, movement-like entity. With a mobilized base exerting its will on Congress, President Obama could have won a bigger stimulus package, stronger banking reform, and a more progressive healthcare reform bill. Then again, the base could have mobilized against the president — for instance, to oppose extending the Bush-era tax cuts for the rich or to condemn the expansion of drone strikes. The fact is that President Obama and his White House spent an extraordinary amount of energy in his first term trying not to cooperate with the movement-left but to control it, organizing meetings at which White House flacks would try to dictate messages and strategy to progressive advocacy groups.

Although the president was arguably elected in 2008 as a result of movement-like energy and mobilization, Democrats have generally feared and discouraged such movements. Republicans, on the other hand, have encouraged movement energy and pressure within their ranks. For instance, in spite of all the trouble it seems to cause in leading to unelectable candidates and ungovernable extreme positions, the GOP largely continues to embrace the Tea Party ethos and infrastructure. On this distinction, Michael Tomasky made this brilliant observation:

You'll hear a lot of commentators say "both parties fear their extremes," but that's boring. What's interesting is that they fear them in very different ways. Republicans truly fear their base, and they treat them with respect and kid gloves (to a fault, actually) and do their best to placate them. Democrats fear their base in the sense that they fear that they (Dems) will tagged as extreme if they don't make aggressive public moves to demonstrate that they aren't really like their base.

Barack Obama doesn't have to seek election again, so he's automatically even less inclined now to worry about disengagement and disgruntlement on the part of his base. But by the same token, the realities of a second term mean that the president is acutely aware of the intensities of Republican obstructionism and perhaps more willing to throw political and tactical caution to the wind in overcoming those GOP obstacles. And halfway through the president's first term, the emergence of Occupy Wall Street simultaneously demonstrated the void of progressive populist energy and activism in search of a movement to fill it --- and the potential for such a movement to shape public discourse in a way that carves out political space for a progressive Democratic agenda. Indeed, whether you believe that President Obama is inherently a centrist or merely governed as one given political constraints, his first term was marked by well-organized and extreme positions to his right but little public momentum carving out possibilities to his left. And whenever the president did pivot to the center, whatever progressive movement existed had only a distant or outright hostile relationship to the White House and so such moves were viewed with cynicism.

President Obama was indeed a transformational candidate. He now has a second chance at being a transformational political leader, one who runs toward and embraces the messy possibilities of populism and year-round grass-roots engagement or simply continues to try and push away and repress such demanding forms of democracy. Of course there's a more altruistic argument to be made for future Democratic candidates, that channeling the president's campaign infrastructure and grass-roots energy into an independent entity would help build on voter momentum, especially among young and Latino voters, and preserve a strong base of support for the next presidential candidate, even if he or she is less personally magnetic than President Obama. But as a veteran community organizer, President Obama understands that motivation is all about self-interest — and even within the narrow self-interest of his next four years, the president should see that he desperately needs a strong and allied progressive movement force that was so obviously lacking in his first term.

More than 10 million Americans donated to the Obama campaign this election. At least a million volunteered to knock on doors and make phone calls. Now that the election is over, they can do more than click on a petition now and then and sign the president's Father's Day card. They can be organizing in House districts around sequestration or mounting state-by-state campaigns to pass a constitutional amendment getting money out of our politics. Converting the president's electoral base into a vibrant, independent progressive movement in America will help the president, the Democratic Party and, in the long term, our nation.