Occupy gets into the debt market

A new project to buy up and forgive thousands of dollars worth of debt is, at the very least, pretty clever 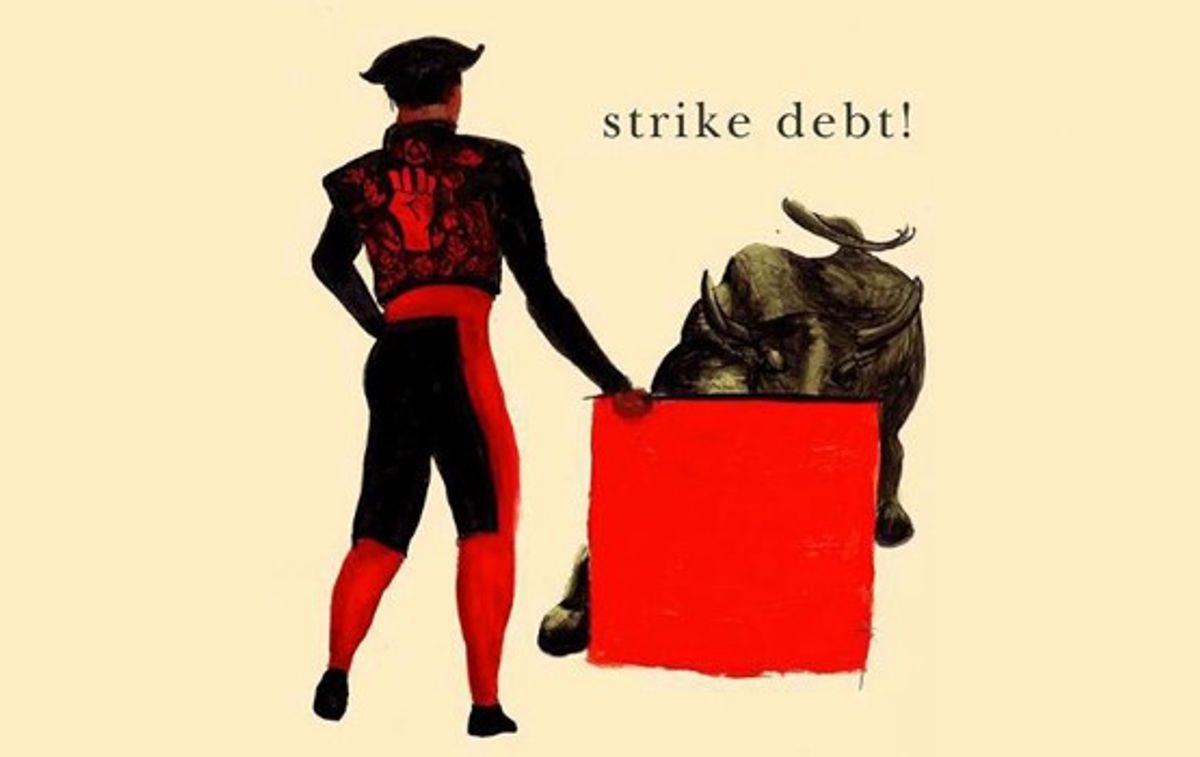 This time last year, Occupy Wall Street participants were regularly storming through Lower Manhattan, snaking around the financial district and beyond in boisterous marches and defending their Zuccotti Park home base in tense street battles with the NYPD. Twelve months later, Occupy is pouring energy into buying up debt bonds.

The Rolling Jubilee -- borne of Occupy offshoot group Strike Debt -- is best considered one among many Occupy tactics that aim to challenge or disrupt our current socio-political economic conditions. And as far as tactics go, this one is pretty clever. The idea is this: Occupy plans to buy up distressed debt -- debt which is in default -- and then forgive it (or, "abolish" it, as the ever-dramatic Occupy parlance puts it). Banks sell on distressed debts at pennies on the dollar (since the debts are in default, they're not making money off them and prefer to get rid of them). There are a number of websites where anyone can go and then buy this discharged, cheap debt. So, you or I or Occupy could buy $16,000 worth of debt for just $500 and then either make a profit by recovering the difference or just cancel it. Occupy and Strike Debt plan to do the latter on a large scale.

The Rolling Jubilee campaign, also dubbed "The People's Bailout," kicks off with a good, old-fashioned fundraiser telethon in New York on Nov. 15 with big-name musicians such as Jeff Mangum performing. Occupy has already started taking donations for the project, and Strike Debt announced Friday via Facebook that the effort has already erased $100,000 worth of medical debt. The hope, then, is to get it "rolling" -- to create snowballing networks of debtors using what money they can to buy off and cancel more and more debt. Ideally, a pay-it-forward attitude would compel individuals who have their debt forgiven to help buy up and cancel more debt.

The plan is legally sound and has been tested in successful experiments, which began with buying and forgiving $14,000 of credit debt for $466 some months ago. Discharged credit card debt, medical debt and private student loan debt can all be bought. (Government-backed student loans -- since they're government-backed -- don't get sold on.)

The New Statesman's Alex Hern noted that despite the "legal mechanics" of the Jubilee idea working in Occupy's favor, the effort may face other obstacles. "Debt collectors really can cancel the debt if they want. The problem is that if you try to actually do that, you may find very quickly that people stop selling you debt." Hern explained a similar plan concocted by a group called American Homeowner Preservation, in which they would buy a foreclosed house in a short sale at the market price, and then lease the home back to the ousted homeowner until the homeowner had the ability to get a mortgage and buy it back at a pre-set price. Felix Salmon wrote about the effort:

The idea might have been elegant, but it didn’t work in practice because the banks wouldn’t play ball: they (and Freddie Mac) simply hated the idea of a homeowner being able to stay in their house after a short sale and often asked for an affidavit from the buyer saying that the former owner would certainly be kicked out.

The banks' behavior here, as Hern points out, was telling: They have no reason to care what happens to a house once they've sold the mortgage, but they did care when it came to the American Homeowner Preservation project. "The best explanation for their stubbornness is that they fear that organizations like American Homeowner Preservation are creating a sort of moral hazard by reducing the penalties for defaulting on mortgages."

And certainly Occupy and Strike Debt seek, with efforts like the Rolling Jubilee, to disrupt the moral obligation that underpins the contemporary treatment of debt -- a moral obligation that renders millions broke, fearful and unhappy for whole lifetimes. If the Rolling Jubilee helps create the conditions to rupture the way debt is conceived, there's little doubt that banks and the authorities will fight back. Lest we forget -- an encampment in a drab Manhattan park brought out militarized police when business- and politics-as-usual seemed under threat.

When the Rolling Jubilee launches, critics from all sides will jump on it. Radicals will call it reformist, others will call it ineffectual. Matt Yglesias has already missed the point in asking "why is this a better idea than just giving money to poor people?" -- the answer being that this project seeks to challenge assumptions about debt and debtors as political subjects; it's not just about clearing some debt.  More important, however, it is just one tactic -- and quite a clever one at that -- in forcing a rethinking of debt. Earlier this year, Strike Debt put out "The Debt Resistor's Manual," a 100-page advice guide to defaulters and those struggling in debt, with well-informed tips on resisting debt. Neither the manual nor the Jubilee project offer "the answer"; forgiving lots of debt won't bring down capitalism. It might erase some crippling debts; it might forge new networks and affinities. It's certainly an intriguing experiment.