I ruined the family vacation

With one little screw-up, I reminded myself what a loser I am -- and how forgiving life can be 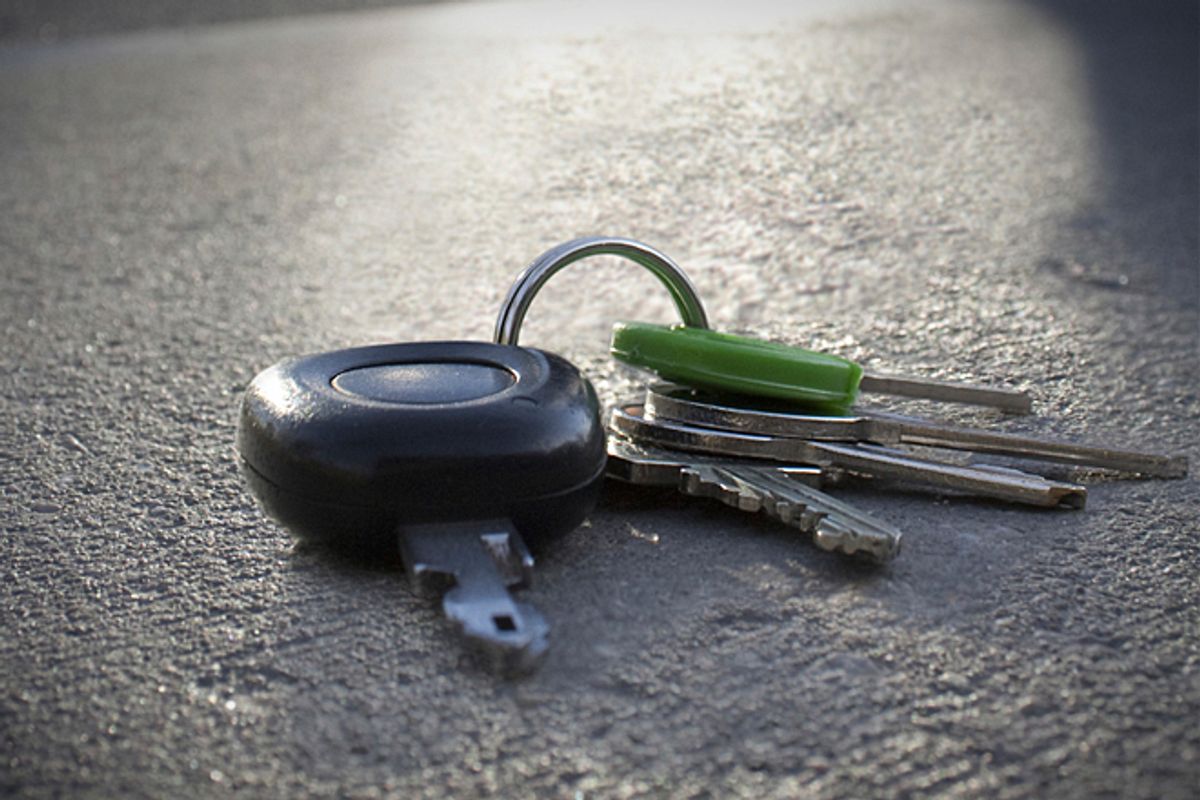 There is a special place in hell for the man who loses the only set of keys to a borrowed car while traveling with his in-laws in Europe. It is a lonely place, for sure. As my wife rummaged through my suitcase for the fourth time, her backward glances growing ever more grotesque, I just stood there catatonic, knowing at my core we would never see those keys again.

I have always been a loser. Wallets, cellphones, gift certificates, the “good” scissors. They all swim in and out of my life like migrating cod. One of the unshakable images from my childhood is of my mother, silent but vengeful, hurling a giant Hefty bag down the stairs to our basement. It contained all the GI Joe parts and Lego pieces I had ever misplaced or let slide between couch cushions. A few days later, she asked why I hadn’t complained about her trashing my stuff. “I finally know where everything is,” I told her.

In Copenhagen, there was no such safety net. My in-laws needed to catch a plane back in Sweden, where my wife, son and I were doing an extended home exchange. The car belonged to the Swedish exchange family, who were currently asleep back at our house in L.A., and we had no idea if they had left a spare key. Even if they did, it would have meant leaving the car in Copenhagen, getting everybody back to Sweden by train and then sending one of us – me – by plane the next morning to retrieve the car and make the four-hour return drive. And that’s if the car was not towed from the 24-hour spot where I parked the car exactly 25 hours ago.

Our Copenhagen excursion had gone mostly OK, save the usual conflicts that surface when traveling with 75-year-olds, 45-year-olds and an 8-year-old. There were too many stairs for some, not enough ice cream for others and a mother-in-law who would not relent until we all traipsed out to see the Little Mermaid statue on the outskirts of town. Now I would kill to be daypack-to-daypack with tourists on the hop-on/hop-off express.

It’s worth mentioning that my in-laws are not especially calm under duress. If my father-in-law accidentally drops his phone or spills something on his pants, it is a crisis not unlike the sinking of the Lusitania. Some primal part of my prefrontal cortex must have engaged when I sent my in-laws off for coffee in the seconds after realizing the keys were gone. But now, after a fruitless search, the parents would have to be told.

“I think I know what happened,” my father-in-law said with eerie calm when I found them at the cafe. “You lost the car keys, didn’t you?”

Harvard psychologist Daniel Gilbert likes to tell us how bad we humans are at predicting future states of emotion, or “affective forecasting,” as he calls it. He’s right. I truly expected my father-in-law to start clutching his chest and calling for his daughter to divorce me when he heard the news. Instead, he just sort of sat there.

At the same time, I hadn’t counted on the depth of my own self-loathing. How completely stupid could I be? How irresponsible? But that’s what losing things does: It is humiliating, unmooring. When you lose something important, you lose an important part of yourself – your dignity, your integrity, your flimsy hold on whatever you convince yourself is firm ground. The lost keys suddenly loomed as this metaphor for a lifelong pattern of carelessness that spoke to my inability to be a mature, functioning, reliable adult. The mess was also going to cost me: parking tickets, train tickets, plane tickets, the replacement key – and all in one of the most expensive cities on Earth.

We split up. My wife and her mom took our son and went to look at train schedules while my father-in-law and I retraced my steps of the previous afternoon. What’s surprising about losing keys in an unfamiliar city the day you need to leave town is this: a) People you meet have never actually dealt with this situation before and will inevitably tell you to go to the police, and b) the police have never actually dealt with this situation before. Oh, and c) anything remotely shiny on the sidewalk looks exactly like your car keys.

My father-in-law is a retired doctor, and something about this crisis – a legitimate one as opposed to the spilled-marinara-sauce kind – brought out the composed practitioner. He calmly plotted our route back through the cafes and shops we’d visited the day before, inspected the area around the car with me like a CSI, and strategized with the desk clerks at our hotel for radical solutions. One involved a sailor friend of the concierge’s who could possibly break into the car and hot-wire the engine for us. “As long as the car doesn’t stall on the way to Sweden, you should be OK,” the concierge said. Fortunately, his friend was “at sea.”

He wasn’t the only one. When the five of us met up again, I was spiraling. I knew nobody in the family would ever trust me with anything and that losing the keys would be the only lasting memory of this trip. By my loose calculation, the mistake would set me back $5,000 and cast a shadow over what was left of our home exchange. As I pondered all this in a chair in the hotel lobby, my wife shot me a look that said two things: One, get over yourself, and two, let’s go ride roller coasters.

All summer, against our better grown-up judgment, my wife and I had been introducing our son to amusement park thrill rides. Sweden’s most popular fun park was about 20 minutes from our house in Gothenburg, and here in Copenhagen, we were mere steps from Europe’s most famous amusement park – Tivoli Gardens. Tivoli opened in 1843 after founder Georg Carstensen convinced Denmark’s King Christian VIII that "when the people are amusing themselves, they do not think about politics." Ruth figured Tivoli could work at least as well for lost car keys.

Something deep in me was holding on to the angst, and I didn’t feel at all like having fun. To let go of the grip was to forgive myself, and that wasn’t on the table. But Ruth insisted. She sent her parents off for an hour of souvenir shopping while the three of us headed directly to the Rutschebanen. If it’s not the oldest wooden roller coaster in the world, it certainly felt like it. The magic comes not from any inverted loops or rolls but from watching the daredevil brakeman who stands tall between the two cars to control the speed. I was miserable, and this was only making things worse. As we roared in and out of tunnels it really looked like the operator was a hair’s breadth from losing his scalp (his flat-top buzzcut added to the effect). I sat next to a Swedish blonde who told me to “make sure your head stays on.”

We screamed, my head survived and a sense of peace arrived as the thing crunched to a halt. And then we rode it again and again.

Back at the hotel, we gathered our bags to leave, and my father-in-law needed to use the bathroom (he had spilled something on his pants). As we waited for him, a woman from housekeeping strolled over to the front desk and handed something to the concierge. “I found this in the restaurant and thought someone might be looking for it,” she said. As if in slow motion, the concierge held up the car key and let it dangle silently over the front desk, waiting for our reaction. It might have been the happiest moment of my life.

I'm a writer in Los Angeles who knows exactly where his keys are. Read more at www.davidhochman.com.