Karl Rove's having a bad week

First his candidate gets trounced, then he suffers the indignity of a Trump Twitter blast. Poor Turd Blossom! 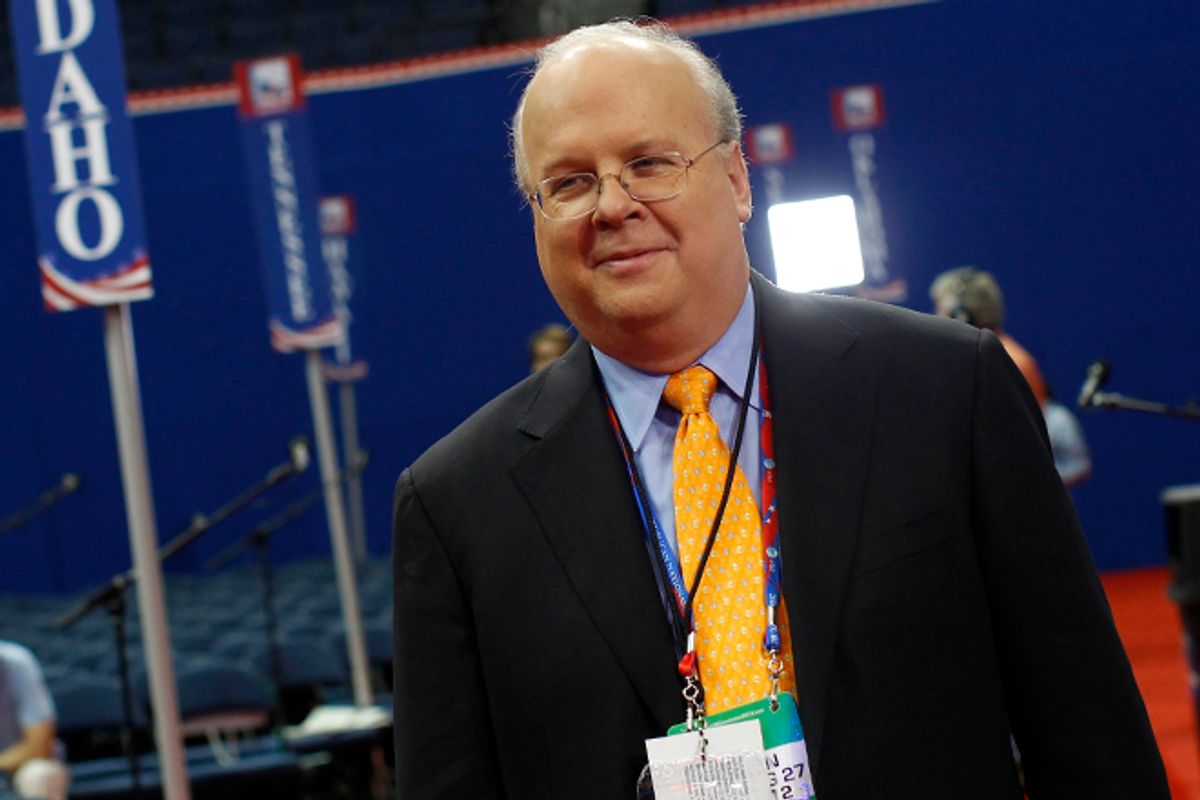 There’s been much schadenfreude on the left in the days after Tuesday’s election, and understandably so: Fox News, right-wing politicians, and conservative pundits all took an embarrassing beating.

Perhaps the biggest recipient of that schadenfreude is Karl Rove. Rove has had a rough week, to put it mildly. After his infamous meltdown on Fox News Tuesday night – at one point in the evening Fox anchor Megyn Kelly asked him if his calculations were “math you do as a Republican to make yourself feel better” – things have just continued to go downhill. Here’s how.

1. Researchers find that Rove’s super PAC was one of the election’s biggest losers.

Researchers at the watchdog group the Sunlight Foundation found that Rove’s American Crossroads super PAC came in second to last, ahead of only the NRA, in terms of how much “bang for their buck” they got in this election. TheAmerican Prospect explains:

[T]he biggest money-waster of all, you will be eternally gratified to hear, was Karl Rove's American Crossroads super PAC, which forked out a whopping $104 million and had a “desired result” rate of 1.29 percent. That’s right, folks: The great genius of American Republicanism wasted more of his donors’ money than anyone else. (His non-profit group, Crossroads GPS, did marginally better—a 14-percent “desired result” rate.) Looked at one way, though, American Crossroads had a kind of perfect score: The super PAC supported zero candidates who won on Tuesday.

At the other end of the scale is Planned Parenthood, which had a more than 97 percent success rate with its two political funds.

2. He gets chewed out by wealthy GOP donors.

The Huffington Post reports that rich donors are none too pleased with Rove:

"The billionaire donors I hear are livid," one Republican operative told The Huffington Post. "There is some holy hell to pay. Karl Rove has a lot of explaining to do … I don't know how you tell your donors that we spent $390 million and got nothing."

3. Even the ridiculous Donald Trump makes him look foolish

Though not quite factually accurate, this tweet from Donald Trump is a good example of the rich dude rage directed at Rove:

"Congrats to @KarlRove on blowing $400 million this cycle. Every race @CrossroadsGPS ran ads in, the Republicans lost. What a waste of money."

Supposedly Rove held a call with donors yesterday. That must’ve be interesting.

4. He shows how much he’s living in fantasy land by saying Obama “suppressed the vote.”

Rove’s election night Fox News performance revealed exactly how much of a liar he is. Yet he continues to try and pass off obvious BS as reality. Case in point: his claim earlier this week that Obama, whose campaign led a large, successful get out the vote campaign, won the election by “suppressing the vote.” The LA Times puts his remarks in context:

Appearing on Fox News, where he enthusiastically contested the network’s call of Ohio in favor of Obama earlier in the week, Rove said that Obama had “succeeded by suppressing the vote,” particularly by denigrating “Romney’s character, business acumen, experience.”

Rove’s remarks come after a recent outcry from voices on the left that Republicans were attempting to suppress the vote though voter ID initiatives in vital states such as Pennsylvania and Florida.

5. The devastating op-eds keep rolling in.

Finally, Rove is getting taken to task for his lying and manipulating. What took everyone so long?