From the Civil War to James Bond in one quick step

A historian discovers the truth of Faulkner’s comment: The past isn't dead -- it's not even past 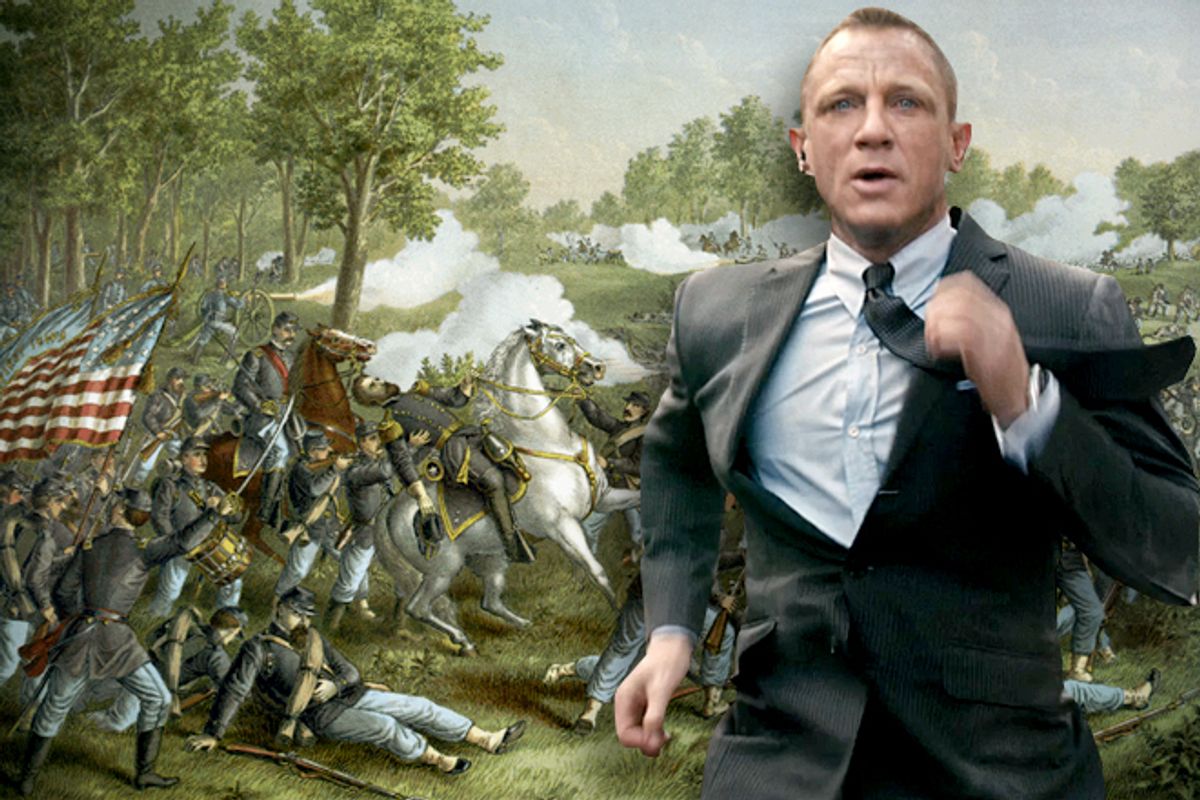 When I set out in the early 1990s to write a short biographical piece on Col. William C. Oates, the Confederate commander of the 15th Alabama Infantry, who failed to dislodge Col. Joshua Lawrence Chamberlain and his 20th Maine Regiment from the slopes of Little Round Top at Gettysburg on July 2, 1863, I had no idea where the project would take me.  For one thing, that brief sketch led eventually — some 15 years later — to my writing a biography of Oates, cradle to grave.  For another thing, it showed me how close our connections are to the past and how relevant is William Faulkner’s comment that the past is not dead; in fact, it’s not even past.

Oates never gained as much fame as his Gettysburg adversary, the heroic Chamberlain, but he did have an illustrious career as a Confederate officer who lost his right arm in the war, a seven-term congressman from Alabama, a one-term governor of his state, and a brigadier general in the Spanish-American War. While rummaging around trying to find sources on Oates’ life, I stumbled onto the fact that his granddaughter, Marion Oates Leiter Charles, lives in the Georgetown section of Washington, D.C., and in Newport, R.I. But I also discovered that Mrs. Charles (known as Oatsie to her friends) is just as intriguing as her grandfather, if not more so. Long talks with her over several years, many of which took place in the handsome library of her Georgetown home, revealed not only her own sense of history and the links she felt to her grandfather and her family’s past, but also how — as Col. Oates would have put it — she has gotten on in life.

For those who know Oatsie well, she is a force to reckon with — a woman who is blunt, charismatic, intelligent, witty and marvelously disarming.  “You know, Glenn,” she said to me after several of our meetings, “I do like you, even though you are a damn Yankee.”  I took it as a great compliment.  Reporting Oatsie’s flamboyant arrival to a Mount Vernon lawn party by a boat on the Potomac River, one fashion magazine correctly called her “unsinkable.”

The thing that astounded me the most, I suppose, was learning that Oatsie had introduced Ian Fleming, the author of the James Bond novels, to Sen. John F. Kennedy in 1960.  Oatsie and her late husband, Thomas Leiter, had gotten to know Fleming in Jamaica in the early 1950s.  Fleming gave his secret agent a friend in the Central Intelligence Agency named Felix Leiter after Oatsie’s husband. After Oatsie settled down in Newport, she got to know the Kennedys well.  While Jack was recuperating in a Newport hospital after one of his many back surgeries, Oatsie gave him a copy of Ian Fleming’s "Casino Royale," and Kennedy became an immediate fan of the James Bond book series.

In March 1960, Fleming was visiting Oatsie in Washington, and on one early Sunday afternoon, they were driving to lunch along P Street when Oatsie noticed Jack and Jackie coming out of church.  Oatsie pulled her car over (in Fleming’s version of the story they were riding in a cab), took the author by the arm, led him across the street, and introduced him to the couple.  “Not the Ian Fleming!” was Jack’s response.  That night Fleming dined with the Kennedys, Allen Dulles (director of the CIA) and other Washington luminaries, and inevitably the discussion turned to covert operations, particularly how special ops might neutralize the rising influence of Castro in Cuba.  Later, after Kennedy had become president, he told Look magazine how much he liked Fleming’s novels, and the 007 phenomenon — which had never been quite as fashionable in the United States as it had already become in England — suddenly took off with a popularity among Americans that has never died down.  (The 23rd Bond film, "Skyfall," starring Daniel Craig as 007, opened on the weekend.  Craig, in my opinion, is the best Bond since Sean Connery.  Fleming thought the suave English actor, David Niven, should play the role in the first Bond movie, “Dr. No,” but luckily he was overruled.)  Fleming had promised Oatsie that he would name a character in one of his thrillers after her, but he died in 1964 before he could make it happen.

Never could I have dreamed that pursuing the life of Oatsie’s grandfather would take me into the world of Ian Fleming, John F. Kennedy and the world’s most famous secret agent.  For historians, the past and the present sometimes meld together, for the past is always the present to us, but this experience is unlike any I have ever had as an expert in the American Civil War.  It is Oatsie’s tangible touchstone with the past, though, that has made my own connection to her grandfather seem more real and less distant than it otherwise would have been.  Oatsie, in other words, has revealed to me the Southern reality of a living past like Faulkner’s.  And it is Oatsie who narrowed those degrees of separation between Col. Oates, Ian Fleming and me.

Oatsie Charles turned 93 last September, but she still has a warm, dry handshake that Fleming’s James Bond would certainly admire, and she remains — as she always will to me — truly unsinkable.

Glenn W. LaFantasie is the Richard Frockt Family Professor of Civil War History at Western Kentucky University. He is working on a book about Abraham Lincoln and Ulysses S. Grant.