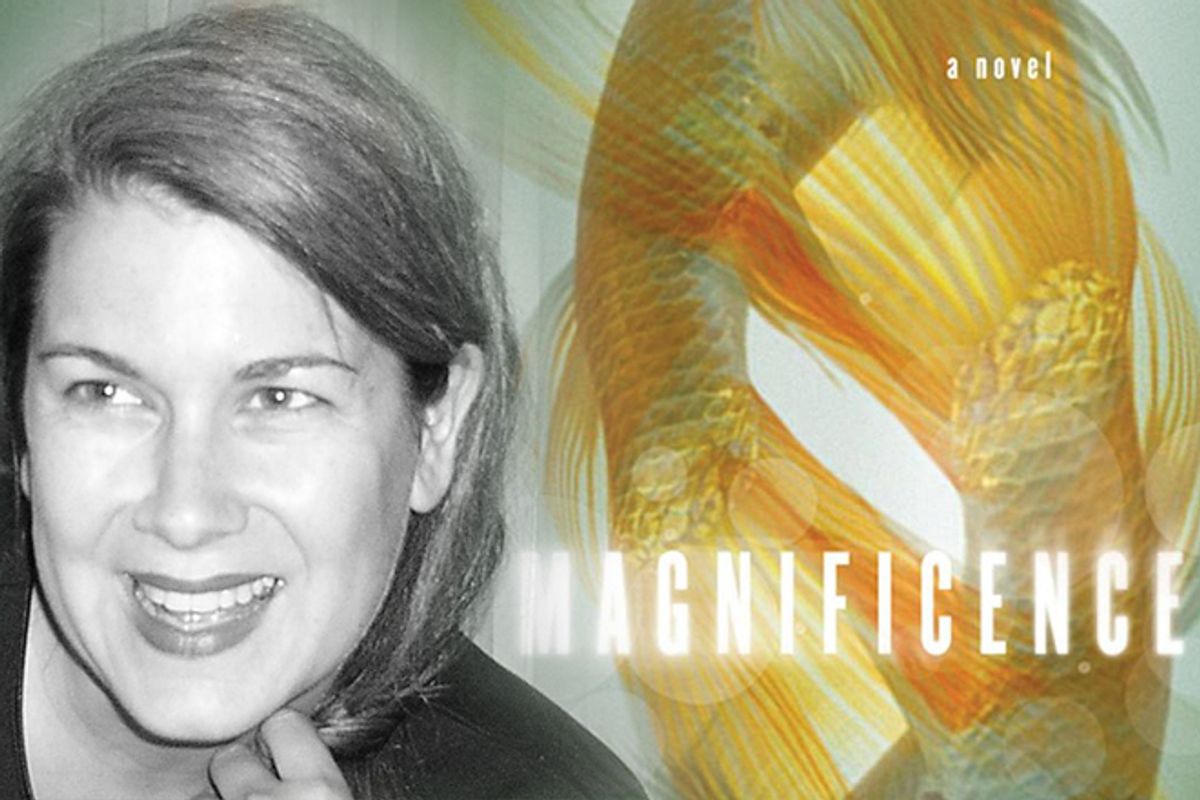 Lydia Millet's new novel, "Magnificence," begins with the main character, a secretary in her late 40s named Susan Lindley, on the way to LAX. Her thoughts are a stream of generalizations about men and women -- culled, it seems, from poorly digested popular science reporting -- both hilariously reductive and dismayingly familiar. "It was hard to be a man," Susan tells herself. "The men were all insane, basically, due to testosterone." Women, on the other hand, are "neurotic," but only intermittently so. "Oddly, the chronic insanity of men was often referred to as stability; the men, being permanent sociopaths, got credit for consistency. Whereas the women, being mere part-time neurotics, were typecast as flighty."

"Magnificence" is the third novel in a sequence that began with "How the Dead Dream" (2008) and continued with last year's "Ghost Lights." You could say that the thematic thread running though all three books is endangered species, but that would give the erroneous impression that Millet's fiction is didactic or activist. True, T., the main character of "How the Dead Dream," a real estate wunderkind who became obsessed with vanishing animals after his girlfriend died, has, by "Magnificence," turned eco-warrior. But T.'s efforts are little more than background noise in the story of Susan, who once worked for him. It is the people in Susan's world who strike her as endangered -- or, in the case of her husband, Hal, who was murdered at the end of "Ghost Lights" -- extinct.

Hal was walking down the street in a South American town when he was killed in a mugging. A habit-bound IRS employee, he had come to this unlikely spot in search of T., who disappeared into the jungle while in pursuit of obscure metaphysical goals. But Hal would never have volunteered for the quest if he hadn't been profoundly shaken after discovering Susan fooling around with a co-worker.

In "Magnificence," we learn that this fateful tryst was only one in a long series of adulteries. Being a self-described "slut," Susan believes, is "the sole creative gesture of her life," an extravagant, willfully selfish secret that offers "the only space ... Where she was not only a dutiful mother or wife." She loved Hal, but that love was "vegetarian," it had " the meekness of grass-eaters." Her dispassionate affairs made her feel like a carnivore. Now, having indirectly caused Hal's death, she considers herself something worse, a murderer: "She thought along those lines daily. The murderer poured a cup of coffee. The murderer went to sleep."

Then, unexpectedly, a great-uncle she barely remembers dies and leaves her a ramshackle mansion in Pasadena filled with an impressive array of taxidermy. She pads its shabby corridors, contemplating rooms whose contents have been organized by regions -- the African savannah, the Arctic, the rain forest -- trying to figure out the man who assembled it all. That's not the only mystery, either, since the house's original blueprints indicate a sizable basement that Susan can't find access to anywhere.

In the iconography of gothic fiction, a big old house like this represents both the heroine's psyche and the secret-haunted history of a family. But just as "Magnificence" isn't quite a political narrative, it also isn't quite a psychological one, either. Instead, this is a novel of ideas or philosophy, disguised as the portrait of one woman's midlife upheaval. Susan's uncle, like Susan herself and like much of the human race, was a hunter and a collector. But can the habits of the past, and the easy categorization we so often revert to (sociopathic men, neurotic women), be defied? Is it possible for a predator to become something less rapacious and destructive? Susan, a middle-class former hippie, surveys her new kingdom and has her doubts: "The only real selfishness was wealth like this. The commandeering of places, their fencing in, the building of palaces there -- arches, gardens. No other selfishness mattered. All other selfishness was petty, as tiny as blown dust."

Gradually, however, the mansion begins to collect living inhabitants. Susan refurbishes the fish ponds and fills them with koi. T.'s senile mother moves in, trailing an entourage that includes her caretaker and a gaggle of old-lady friends. Susan's latest, and most serious, lover, a lawyer who shares her bemused humor, is divorced by his wife and ends up spending most nights with her. Susan discovers a concrete slab in a back corner of the grounds and workmen are brought in to excavate.

Millet's distinctive prose style is rooted in an often very funny, rambling vernacular studded with pop-cultural flotsam and jetsam. "As far as she went," Susan thinks, "she had ended Hal already. That black deed was done. Hal was over. Nothing could bring him back, nothing she did, no virgin purity, no nuns." The nuns make little overt sense (Susan isn't Catholic), but somehow they fit, and when they turn up again in her picture of the conventional heaven -- "there they all were, all the ones you had known, cavorting like pretty, liberated nuns upon the alpine meadows green, frolicking, also like pretty nuns, their vows now shed in favor of romance, in stately, shining ballrooms" -- you understand that Susan's notion of goodness has been thoroughly colonized by the banal imagery of "The Sound of Music."

Every so often, as with most of us, Susan gets an intimation of something more. Then, Millet's writing slides into another register, a restrained loveliness capable of stopping the reader in her tracks. "She could move peacefully between the walls as though she walked a neat path in history," Susan muses about her daily routine in the mansion, "as though her time and place were not the product of chance at all but of an ancient arrangement. She lived in the soft footprint of a ceremony."

Wrenched out of her customary context, Susan comes to understand that she lost her capacity for hope after her daughter, Casey, was left paraplegic in an automobile accident. Millet doesn't exactly deplore that loss -- the presumption of safety is one of the first-world delusions her novels seek to dismantle. Susan ricochets between the petty grasping of everyday life, a despairing materialism in which she sees the universe as an "unending stream of atoms, churning atoms out of which significance beamed -- significance, but not purpose," and -- more and more, little by little -- a tentative, necessarily incomplete transcendence. Given that everything must be lost in the end, what, if anything, should we try to save? For Susan, it is "the gone ones ... we live with them still, we always will."