Bill Kristol gets it, but the rest of his party doesn't (yet): Obama has a mandate to tax the wealthy 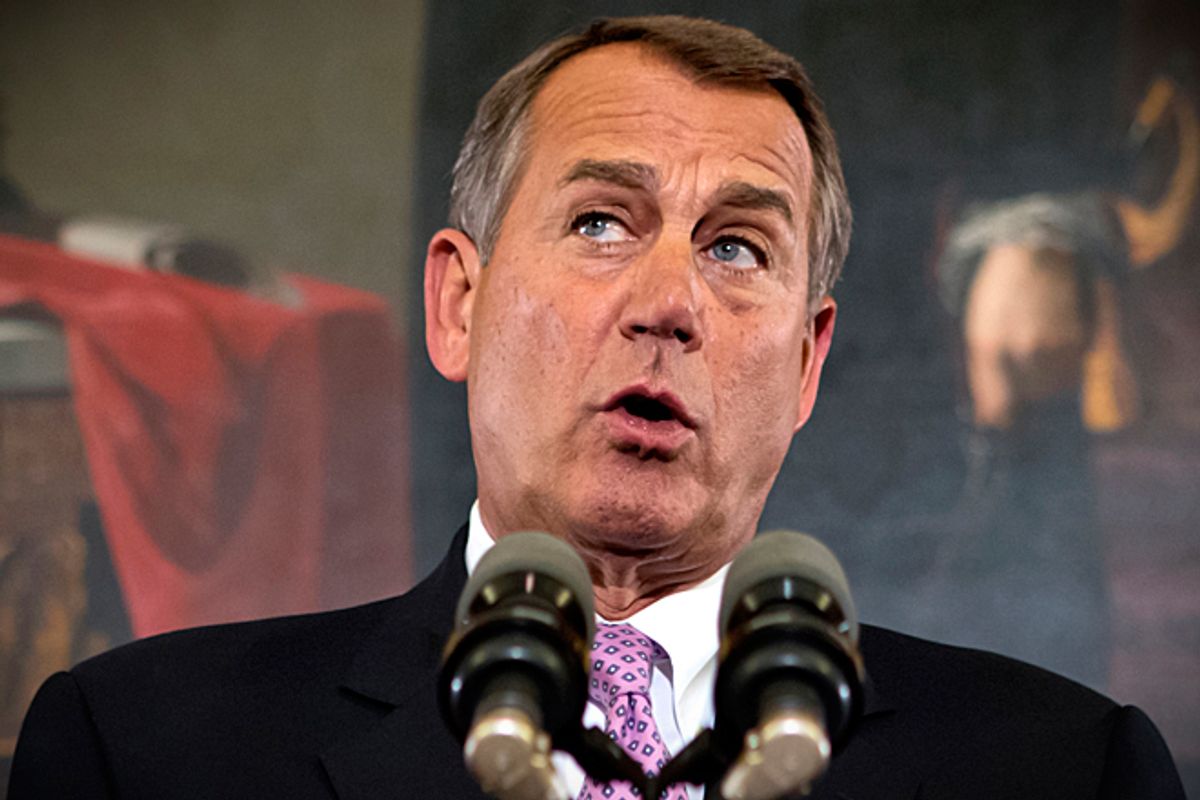 In a media-driven nation whose lingua franca is story and whose culture is obsessed with narrative arc, 2012 not surprisingly delivered a television-powered presidential campaign rooted in oversimplified parable. Republicans manufactured the tale of an up-from-the-bootstraps businessman working to defeat a communist Manchurian Candidate. Democrats, meanwhile, told the tale of a grounded, grassroots middle-class populist working to stop a ruthless Gordon Gekko disciple from performing a hostile takeover of the federal government. Both fables were deceptively creative with the facts, often driving the campaign debate into free-association collages of phrases like "you didn't build that," "apology tour" and "Bain Capital." Considering this, one way to read the election result is to conclude that Americans simply didn't want a plutocrat in the White House and that therefore, there is no single policy mandate for the winner.

The latter half of this interpretation, no doubt, is what Republican congressional leaders are trying to cement in the post-election period's fast-solidifying mortar of conventional economic wisdom. Thus, while the GOP concedes the political failure of their epic loss, when it comes to legislating tax policy -- arguably the single most important budget and economic issue that faces America -- House Speaker John Boehner has said that ending the Bush tax cuts is "unacceptable" and further, that the 2012 defeat of the GOP somehow gives Republicans "as much of a mandate" to "not raise taxes" as any mandate Democrats have on any issue. Predictably, washed-up Beltway stenographers like the Washington Post's Ruth Marcus and National Journal's Ron Fournier are now echoing Boehner's line, mindlessly forwarding the idea that while Democrats general storyline won the election, there is nonetheless no clear policy message from voters on any specific issue -- and especially on taxes.

The problem with this argument can be seen in rudimentary arithmetic: With House Republicans receiving fewer total votes than House Democrats, Boehner's claim to any share of a mandate is as idiotic as any similar claim of a Republican policy mandate after George W. Bush decisively lost the national popular vote in 2000. But even if GOP partisans and their loyal media zombies overlook the specific math of the House, and even if they additionally ignore that Obama's election more than meets conservatives' previous standard for a genuine mandate, they run square into the following three sets of indisputable facts about the defining role of taxes in the national election:

• While Obama and Romney agreed on many economic issues (trade, corporate tax rates, Social Security cuts, to name a few), the key economic policy difference between the two was income tax rates. This wasn't a difference voters were unaware of -- on the contrary, in ads, speeches and debates, both candidates made this difference the central part of their economic argument.

• Exit polls showed that economic policy was, by far, the biggest issue for voters in the election. As important, Politico reports that the same polls showed that on the single most significant economic policy issue, taxes, "six in 10 voters nationwide say they think taxes should be increased" while "only about a third of voters said taxes should not be increased at all." These numbers could be written off if they were aberrations, but they are the opposite: They confirm previous polls showing consistent and strong support for raising taxes.

- In major tax battles at the state and local level, many locales saw voters resoundingly approve tax increases. For instance, in the swing state of Colorado -- a state with a deep anti-tax history and one regularly billed as an electoral microcosm of America -- the Denver Post reports that most "cities seeking tax increases on the 2012 ballot received voter approval." On top of those municipal levies, the state's major school districts -- including Jefferson County, one of the nation's most politically important swing counties -- also voted to raise taxes. Likewise, in Michigan -- another swing state -- voters overwhelmingly rejected an initiative to make it more difficult for the legislature to raise taxes. And, of course, there were the stunning results in California -- the state that famously birthed the original anti-tax revolts which eventually led to the Reagan era. In that same state, the San Jose Mercury News reports that voters "over[came] decades of anti-tax sentiment" by passing "a tax hike to rescue the state's schools...in surprisingly decisive fashion." Additionally, the newspaper reports that "Proposition 39, which forces big businesses to pay more taxes, won comfortably with 60 percent of the vote."

Put it all together, and behold the 2012 Tax Mandate - a powerful message from voters that makes the stunning post-election news that much easier to understand.

Suddenly, it's clear why conservative pundit Bill Kristol is on TV advocating higher taxes for the rich and criticizing his Republican Party for being willing to "fall on its sword to defend a bunch of millionaires." Suddenly, it's obvious why President Bush's former top political adviser, Matt Dowd, is extolling proposals to let his old boss's high-income tax cuts expire by Tweeting out: "finally a little sanity and sense of need for shared sacrifice." And suddenly it's simple to see why Obama, who in 2010 refused to veto an extension of Bush's high-income tax cuts, is now threatening a veto of those same tax cuts, should Congress dare to pass them. All of these reactions show a political establishment that appreciates the aforementioned facts - and what basic mandate those facts represent.

In this mandate, there is the possibility not merely of a repeal of some of the Bush tax cuts, but also of a longer-term sea change unlike any we've seen since the Reagan revolution. That's because the election suggests a shift in the underlying dynamics of electoral politics - a shift whereby tax hikes have gone from election losers over the last few decades to election winners in 2012 and, potentially, beyond.

In historical terms, that prospective change portends the end of an era - one bookended by Walter Mondale and liberals losing the 1984 election, in part, on a promise of higher taxes, and now Obama and progressives winning the 2012 election on an identical promise. Indeed, that particular historical comparison is so apt and so relevant to this moment that smug conservatives explicitly tried to conjure memories of Mondale's tax stance and use them as a cudgel against Obama. The only difference is that this time around, the tax stance clearly helped, rather than hurt, the Democratic nominee in his quest to win the White House.

Of course, whether the 2012 Tax Mandate and this new tax reality fulfills its potential and ultimately changes policy outcomes still remains to be seen.

Yes, Democrats are in the power position thanks to both the election and the simple fact that if they just do nothing, all the Bush tax cuts will automatically expire in 2013. And yes, the standard Republican argument that tax increases will harm the economy has been thoroughly debunked by the history of the Clinton era, by a recent Congressional Research Service report and by an even more recent Congressional Budget Office report. But as Obama's first term (painfully) shows, when wealthy interests stand in opposition to a particular policy, we should never underestimate the willingness of Democrats to back off their popular promises nor the willingness of Washington to ignore indisputable data. In light of that, and in light of Republicans already closing ranks, making the 2012 Tax Mandate mandate a legislative reality in 2013 -- and making the entire tax debate more rational over the long haul -- requires an effort whose intensity rivals progressives' just-concluded election campaign.

After all, when it comes to stopping a decades-long movement as powerful as the anti-tax crusade, there is never any rest for the weary.