Is our fear of a total global meltdown our new favorite source of entertainment? 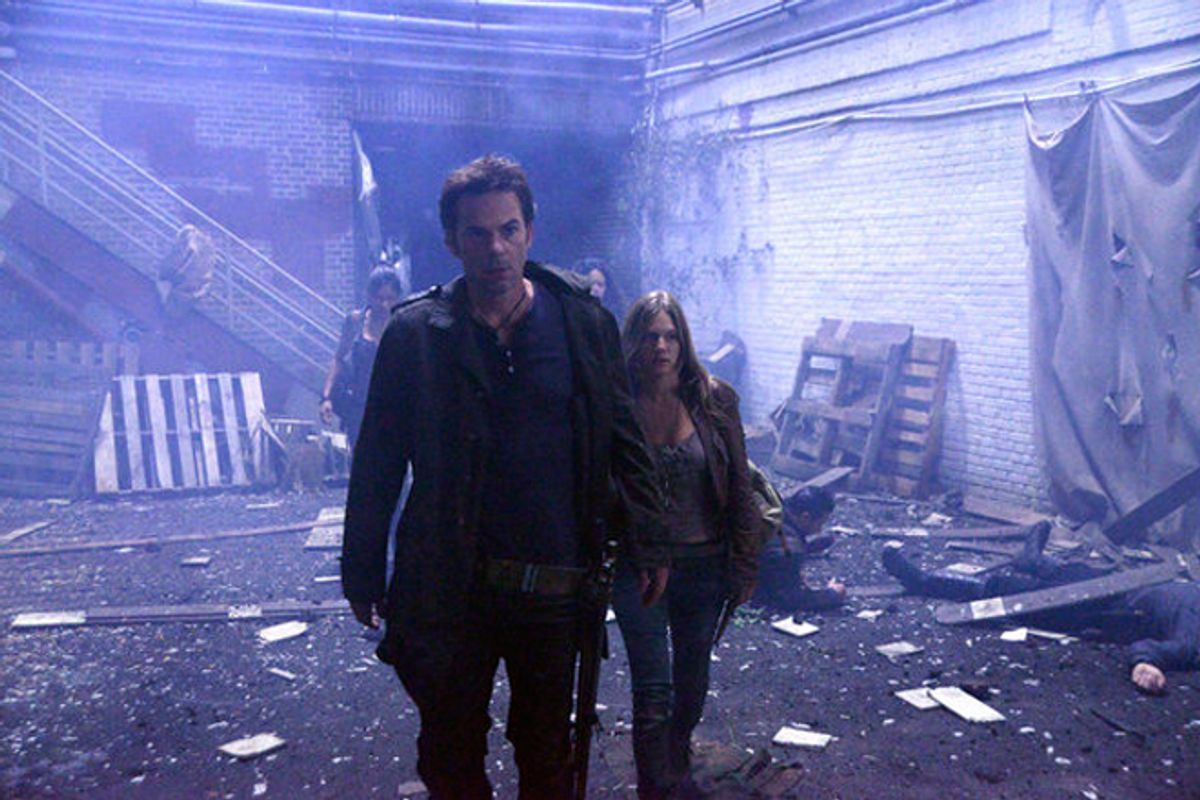 Even before Sandy took out a chunk of power on the East Coast, the top-rated new network series of the season was a show whose central concern was the total loss of electricity. For “Revolution,” society doesn’t operate without electricity — and not just those delivered in wires, but the sparks in automobiles and generators as well. Society breaks down, militias spring up and the rest of your life is roaming round in bands looking for family, redemption or both. Fifteen years later, when we pick up the story, the world’s monuments are engulfed in advanced greenery, as people have for some reasons neglected their gardening hand tools, but they have advanced skills in bows and arrows and swashbuckling swordfighting.

What in “Revolution” was speaking to TV viewers even before the hurricane hit? It can’t be just because it follows the biggest overall hit of the season, “The Voice,” whose fans are just too exhausted after the two-hour episodes to change the channel. More likely, it builds on the irrational fear of total global meltdown that feeds the success of everything from “The Hunger Games” and “The Walking Dead” to “Doomsday Preppers.”

“Revolution” is part of a recent spate of apocalyptic TV shows that begin with a spectacular disaster (that also consumes most of the show’s initial budget) and then settles down into grim faction wars that take place in fields and campsites, where budgets are low, low, low. The spectacular disaster in this series involves instant global power loss, and we see the twinkling skyscrapers shutting off in sequence, followed by long lines of headlights blinking off on the choked highways, planes falling out of the sky and — no! not that! — the screen on your smartphone shutting off for good.

The last network series employing a blackout scenario to start was ABC’s “FlashForward” in 2009, which kept its secret that every person’s blackout contained a premonition of their future. In the super-expensive but utterly failed “Terra Nova,” families had to get off the doomed Earth and go back in time to a parallel universe 85 million years earlier when dinosaurs roamed. It was from Steven Spielberg Productions, as is “Falling Skies,” the series about insurgents fighting incoming aliens.

Despite its mock insurrectionist title, which may have Gil Scott Heron spinning in his grave, “Revolution” is a bit like “Jericho,” the CBS series in which factions battled following a nuclear event. It soon settled into faction fighting as well, but hit a nerve with enough fans that they put on an unplanned extra eight episodes to placate them. The template for all sci-fi series of struggle, of course, is “Lost,” which captured a zeitgeist as well as one of the bigger audiences for this type of show. It set out a way to blend a stunning event (a plane crash over a mysterious island), an overarching mystery (where were they?), with character development told in urgent flashbacks. The formula of providing satisfying action on a weekly basis blended with overall progress toward the central mystery set the stage for all manner of lesser attempts.

J.J. Abrams is an executive producer on “Revolution” just as he was on “Lost,” but you get the feeling he left this one largely to its creator Eric Kripke.

Still, if the big mystery of “Revolution” is why the lights went out, it’s pretty obvious to science buffs that it was an elecromagnetic pulse, a threat that has been used  in a dozen sci-fi stories from “The Day After” and “Dark Angel” to “Jericho and “Falling Skies.” The difference in “Revolution” is that a pendant that works like a flash drive owned by 12 people in the world can apparently restore limited power, at least for short periods of time.

“Revolution” is mostly a story of the quest, which fits so well with the weekly TV format: An adventure here, conquering it, while finding out crucial additional puzzle pieces through flashback or a reveal, and it’s on to next week’s destination. Our traveling band is led by our modern-day Dorothy of “Oz,” Charlie, who is a tough teenage girl charged to take care of her brother who broke off and was captured soon after they left their compound. As Charlie, Tracy Spiridakos is about as unlikable a heroine as TV currently features, full of spite and dirty looks and irrational decisions, though she’s always willing to drag her uncle into some deadly fights. Already, she’s being enlisted to do those kinds of things that Jennifer Garner had to do in another series with an Abrams imprint, “Alias,” dressing super-sexy as a lure to bad guys she would kill. Charlie has enlisted the unlikely warrior Miles, an uncle who embodies both the Scarecrow and Tin Man — brains and a heart, but mostly bitching swordhandling skills. In an even more unlikely scenario, she happened to have co-founded the militia they are constantly battling called the Monroe Republic. This, like the show title, lends the series a bogus founding fathers vibe, though it refers to the blond general who runs things in this sector, Sebastian Monroe, and not any doctrine or president kids wouldn’t know.

Miles is the kind of tired underdog, half-shaven antihero seen too many times since Han Solo. Yet his direct connection to their immediate enemy leads to the most unrealistic thing about shows meant to represent the world through a limited cast — everybody’s related or connected in some way, as if there are only eight or 12 people on Earth. Along these lines, the toughest Republic captain (and now major) — and the best character in the series — is dad to the one teen who befriended Charlie early on. As the heavy, Giancarlo Esposito is the saving grace of the show, based on the goodwill he amassed on “Breaking Bad” as the ultimate steely crime boss. He cruises here on that same kind of menace, and any attempt to soften him only undercuts it.

The Cowardly Lion is Aaron Pittman, a former Google executive who can barely operate without electricity and is so ineffectual he abandoned his wife because he felt he could no longer protect her. Played by Zak Orth, he's the only man with full beard and horn-rimmed glasses on TV (other than Saul in “Homeland”) who can add some comedic relief when permitted.

The problem with forging ahead with a new story every week for half a year is that there’s hardly time to take a breath and think of where it’s going. That’s led to all kind of crazy cul de sacs in good shows from “Lost” to “24.” So NBC is taking a risky move by shutting down “Revolution” just after Thanksgiving and not scheduling any further new episodes until almost April. That kind of months-long break was meant to reinvigorate the series “Heroes” a few years back, but the network learned that half the audience was there when it returned.

And who knows if we’ll even have power in the spring.