Things we lost in a hurricane 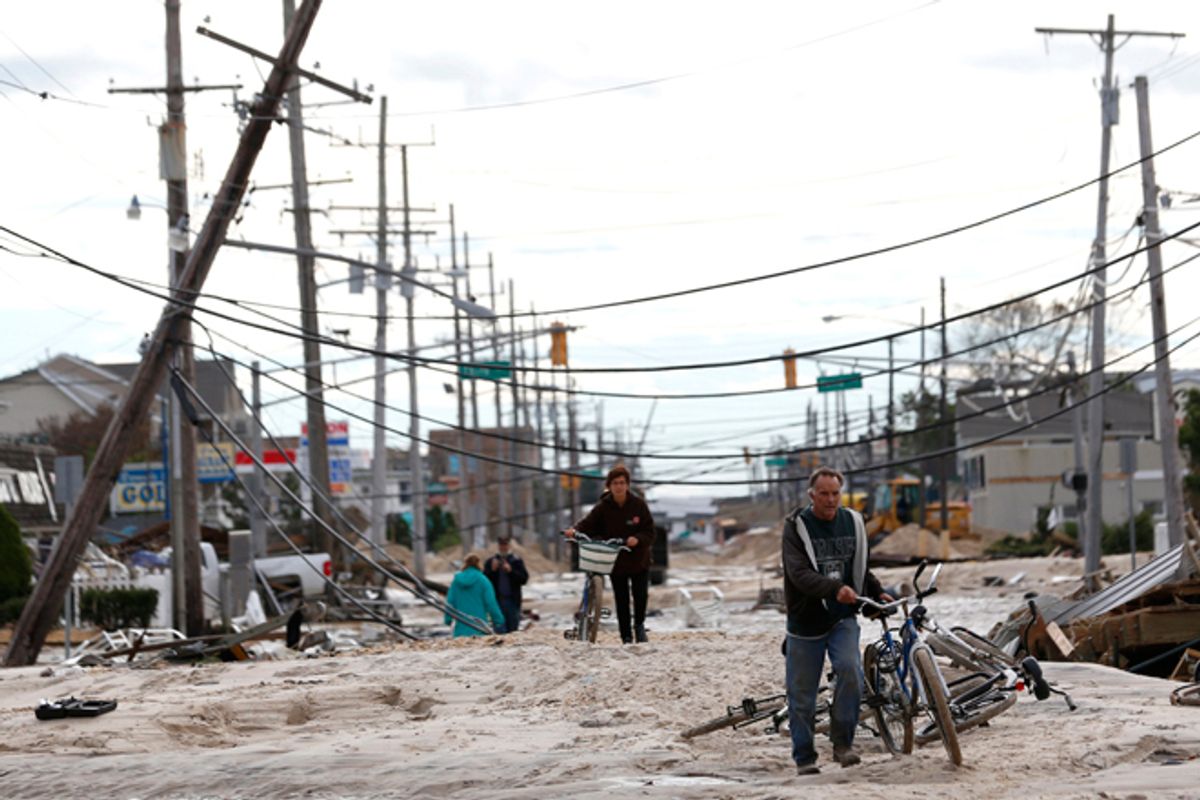 People walk through sand that washed up from the beach and onto Route 35 during superstorm Sandy, Wednesday, Oct. 31, 2012, in Lavallette, N.J. (AP/Julio Cortez)
--

THERE’S FOUND ART, and then there’s lost art. Found art sometimes ends up in museums or galleries or personal collections. Lost art ends up—well, I can’t say exactly where.  People are thinking a lot about this now because so many artists’ work was damaged or disappeared in Hurricane Sandy (see Jennifer Kabat’s thoughtful Weeklings piece on this subject). Art—images, objects, words, sounds—has always been in danger of perishing, in the physical sense—by acts of nature, by governments, by carelessness or neglect. With so many ways of “backing things up” now, we’re lulled into the feeling that everything is safe, everything is permanent.  If only there were some sort of iCloud to make this true, to automatically save physical objects, someone could surely make a killing.

I guess it’s like with anything you treasure—it blasts your heart when it goes away. But if energy went into the work in the first place, and if energy can’t be destroyed, then maybe the picture is not quite the way it seems.

Dire example, and the sort played out too often through history: The great Russian writer Isaac Babel was arrested by the secret police in 1939, taken to prison, and his work was confiscated and destroyed—including unfinished stories, plays, and film scripts. In 1940, at the age of forty-five, he was shot by a firing squad. At the end he begged, “Let me finish my work.” So there was the work that was destroyed and there was the future work that never came to be. The potential, aborted.  I’m looking for a silver lining here. Babel did publish a large number of extraordinarily influential stories, and some plays, and all of that remains. He worked fiendishly hard during his short time on this earth. He left traces of his world. And I’m wondering this: What if during his life he spoke to someone about a story that was among the ones destroyed or never to be finished, and that person was affected by the words and took them, even a shard of them, and let them grow in some other form? We can’t always know in what way life goes on.

In 1961 the famous Bel Air fire in California destroyed the home of actor Dennis Hopper and with it three hundred paintings he had made. He tried to start painting again and couldn’t seem to do it. According to a book about his work, 1712 North Crescent Heights, Hopper said “fuck painting” and found himself obsessively taking pictures instead. He went from one form to another, and his passion didn’t stop. When I talked to him about his artwork for a magazine article in 2001, he said, “I’m not a nostalgic person. I think you only make so many images in your lifetime that have any chance of lasting.” It struck me as a sobering remark then, just as it does today, but maybe I’m starting to see his point.

Another fire: My friend the artist Sky Pape lost fifteen years’ worth of her paintings when the New York City building she was living in was intentionally set on fire in 1997 by a crazy neighbor. “The initial reaction was pure shock,” she says. Then there was “depression, disorientation, anger, futility. The loss of so much work did make me wonder whether I could carry on as an artist. What could I show for myself? I suddenly was without a current or past body of work. But what I lost was the work, not my abilities, not my identity, not my dedication,” she says. “As soon as I had a space in which to work again, I shut out the thoughts about how the tragedy had completely derailed me and focused on my materials and making a mess. I got back to work.” In fact, other losses had already been steering her in another direction artistically, and after the fire, she moved definitively from representational to abstract work and was drawing rather than painting. She utterly transformed.

I’ve lost some of my writing along the way. My hard drive crashed and there was a lot that was not backed up.  Stupidity—that was the reason for my loss of art, which I forgot to list among the reasons above. I lost many short stories, part of a novel, years of journal writing. For some reason what sticks in my mind most is the disappearance of one particular short story that I felt proud of. I can’t even recall the title now but I remember the feeling of it, the main character’s essential struggle. I’m sure the story had its flaws, but it had some pretty good lines in it. I wish I could have those good lines back so that I could shoehorn them into something else. I can’t re-create them from memory—it’s been too long—but maybe they’re still in me somewhere, waiting to surface in some other form.

And one last example, innocent enough, but one that still stings: When my brother and sister and I cleared out the house we grew up in, a large box of our childhood artwork was accidentally thrown out. My father, sentimental to the end, had carefully saved it and stored it in the basement for thirty, forty years. When we had to sell the house, we hired a crew of guys to help us deal with the overwhelming amount of stuff in it. The guys were grumpy and unfriendly. Even though the box was set aside and they were instructed not to take it, one of them grabbed it and threw it in the dumpster outside. I suppose it ended up in a garbage heap somewhere. Bits of our childhood imaginations saved in time, then gone. Or I could be wrong. Maybe some of it escaped. Maybe a few pictures got up the gumption to blow away and were found and tacked up on some other child’s wall. Maybe art sometimes has a mind of its own.