Are professional tennis players doping, too?

In the wake of the Lance Armstrong scandal, every incredible athlete looks suspicious. And tennis has a lot of them 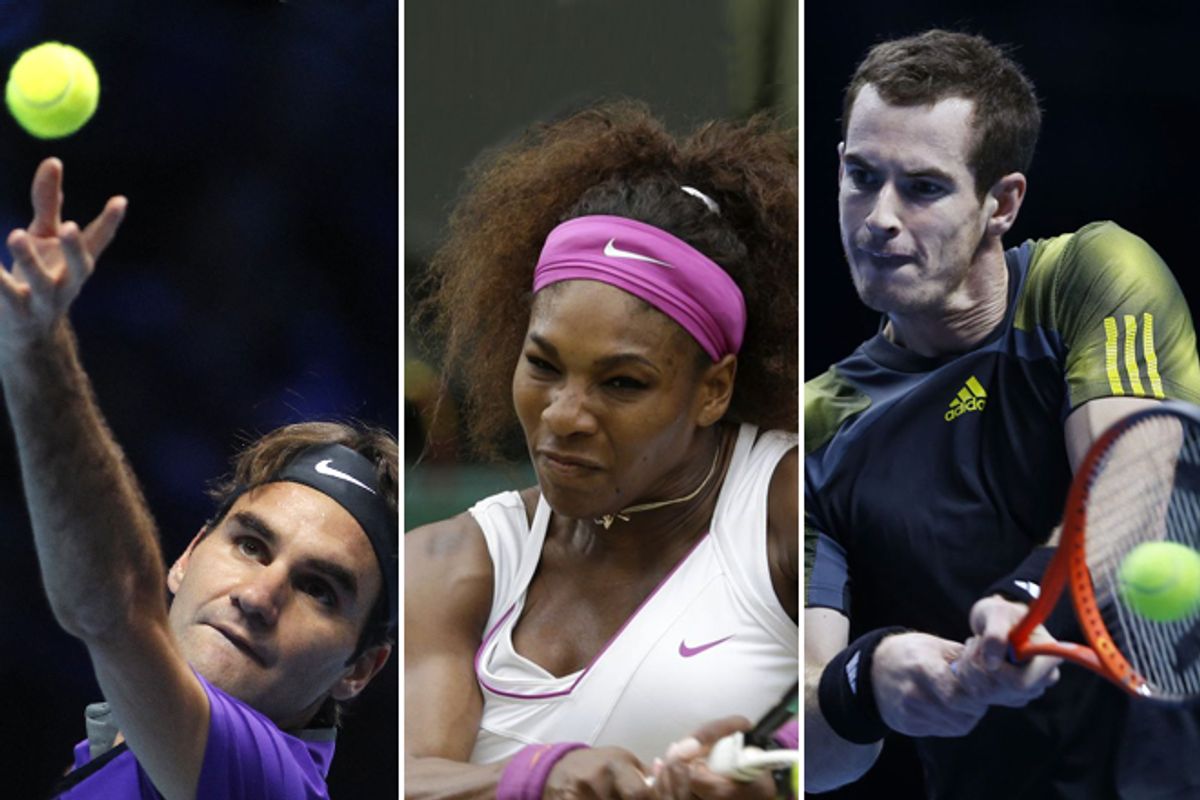 With Novak Djokovic’s win over Roger Federer yesterday at the ATP World Tour Finals in London, the curtain has come down on the 2012 tennis season. Though on paper a routine-looking straight-set affair (7-6, 7-5), it was, as it so often is these days in the men’s game, thrillingly close, the exchanges regularly hitting that spectatorial sweet spot of long rallies and relentlessly precise shotmaking. The match was the culmination of a sort of mini–Grand Slam event in which only the top eight players compete, duking it out without the early-round drudgery of a true Slam. A purist’s paradise, then, a purged meritocracy of irresistible forces meeting immovable objects? Perhaps. But in the wake of the Lance Armstrong doping scandal, no sport that requires as much training, endurance and sheer athletic grit as does 21st-century professional tennis can insulate itself from the chill winds of suspicion and skepticism. So that now, when confronted with the phenomena of Rafael Nadal’s unbefitting (at least for a tennis player) biceps, Federer’s serenely sweatless exertions, and 54-stroke rallies (cf. Andy Murray vs. Djokovic at this year’s U.S. Open final), an unease creeps into our wonder and admiration. How, exactly, are these guys doing this?

The stakes for the game in allaying such anxieties are higher than ever; tennis, at least on the men’s side, is efflorescing in a golden age of outsize rivalries between stylish, brand-able players, minting immortals — first Federer, then Nadal, now Djokovic — at an exhilarating rate. Is it all too good to be true? Après Armstrong, questions are starting to be asked of a sport that has so far succeeded in muting the doping issue more thanks to mass inadvertence than the stringency of its self-policing. So much so that three of the world’s top four players — Federer, Djokovic and Murray (Nadal is injured and was not in London) — felt compelled to address the issue during the pre-tournament publicity; none of them thought they were being tested enough.

Such soul-searching would be more reassuring if we hadn’t been down this road before with Armstrong, whose attitude toward testing throughout his long reign was, essentially, "Bring it on." He could always point to his unblemished record in testing negative as definitive exoneration, even as he and his teammates were scampering, Benny Hill–like, behind the scenes to avoid the latest ambush. The tennis establishment has embraced a similar fallacy, that the absence of concrete proof of individual guilt implies collective innocence. Just the other day Pat Cash, a former Wimbledon champion, weighed in on a representative note: “It’s the perfect sport to take performance-enhancing drugs, with the recovery, strengthening etc., but I think the lack of positive results shows that tennis is a clean sport.”

This is an especially gullible conclusion given the threadbare institutional dragnet in place to monitor malfeasance. Tennis polices its players far more casually than does the much-maligned International Cycling Union (UCI): In 2011, according to the watchdog website Tennis Has a Steroid Problem, the UCI conducted more than six times as many tests on its performers as did the International Tennis Federation, the sport’s global governing body and clearinghouse for doping testing. Part of the problem is financial. The ITF has a modest budget ($1.6 million) with which to address an immodest mandate: regularly test all ranked players both in competition and out. In practice this means that most players are being tested only one to three times per year, and then only in competitive contexts and thus with their guard already up. And if there’s one thing we’ve learned from the Armstrong scandal, as Tennis magazine’s Steve Tignor notes, it’s that quantity of testing matters: “Looking at the way Lance and company avoided the authorities — running, hiding, dropping out of races, smuggling saline in at the last second, burying drugs in the woods — it seems that more testing would have an effect.”

When the testers do show up, moreover, they don’t always get what they came for. Witness the bizarre “panic-room” incident last year involving Serena Williams, in which Williams apparently mistook a tester conducting an unannounced early-morning visit for an intruder, called the police, and fled to the inner sanctum of her Los Angeles mansion. In the resulting chaos the original verificationist purpose of the call fell by the wayside, and Williams was never tested. Strange. Strange too that, if you discount the more cynical interpretation of events, Williams would be so seemingly unaccustomed to the ritual of surprise visits, a supposed staple of life on the tour. Less strange when you consider that, per the ITF’s own accounting, Williams was not subjected to a single out-of-competition test in either 2010 or 2011.

It’s been argued in defense of tennis’s integrity that the rigorous omertà that sustained cycling cartels like Armstrong’s U.S. Postal Service team would never hold in a sport as individuated as tennis, but one recent mini-scandal suggests otherwise. Wayne Odesnik, a journeyman American player, was caught in 2010 trying to import human-growth hormones into Australia. Originally the ITF banned him for two years, but his sentence was commuted to one year, and though the ITF never specified the reason for its decision, the perception among players was that Odesnik had agreed to snitch on his fellows. When he returned to competition at this year’s Wimbledon, he was treated as a pariah; Andy Roddick even suggested that Odesnik be banned for life. If the sport were indeed as clean as claimed, it’s hard to see why anyone would care what Odesnik had to say.

In the end, we’re left with an ambiguous picture. There’s smoke — the list of players caught doping is large enough to hint at a real problem but small enough for the sport to retain a certain plausible deniability — but does there have to be fire? And if there is, is it the kind that burns uncontrollably and lays waste to everything around it, as with Armstrong and the sport he brought down with him, or is it rather a matter of stamping out the occasional contained conflagration? Tennis, like baseball (the Giants’ mid-season suspension of Melky Cabrera being the most recent instance), will have to live with a certain level of doping; no amount of institutional vigilance is likely to change that. This need not be fatal. But as with any tale of corruption, the interest lies in the question: How high does it go? Richard Gasquet, he of the magisterial one-handed backhand, is the only current top-ten player to have been sanctioned for drugs, and that was just for cocaine. But what if the current crop of Olympians, the Rafas, the Feds, should taint, and marquee matches like yesterday’s be asterisked unto eternity? A nightmare scenario, from which the tennis authorities understandably want to avert their eyes. But bottomless cynicism beckons in the post-Armstrong age, like it or not, and it would be wise for them to puncture it sooner rather than later.