In defense of Taylor Swift

A master of quirky pop sincerity, she wouldn't be as ridiculed — or as successful — if she were a guy 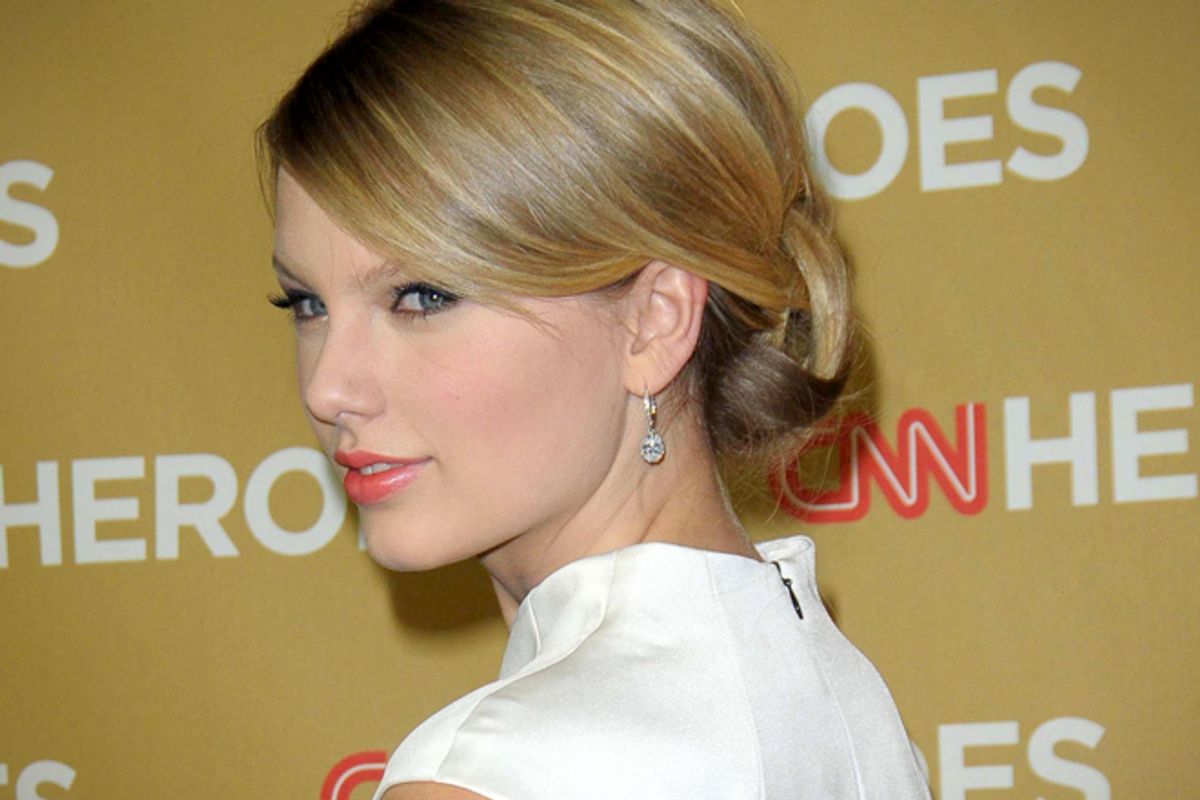 On Sunday, Salon published a piece that asked the question: Is Taylor Swift being taken too seriously? The author, Mark Guarino, argued that while Swift is an able songwriter and an obvious superstar she’s not a serious artist. I disagree. Taylor Swift is being taken exactly as seriously as she should be and I’ll get into why in a minute. But I want to first say that though Guarino’s opinion is manifestly unpopular (the piece inspired a round of vitriol on Twitter, spearheaded by New Yorker music critic Sasha Frere-Jones), I suspect it’s more widely held than the euphoric press on Swift would suggest.

Like many great pop songwriters who break through freakishly young (Swift signed her publishing deal at 14 and released her first album two years later), Swift’s lyrical style is so direct it can be misunderstood as facile. She is an artist who, without irony, titles her songs “Love Story” and “Innocent.” You’ll find wit and sass and even sarcasm in Swift’s lyrics but never cynicism or hopelessness, and for those who’ve actually experienced life after 22, that can be difficult to stomach. Then there’s the fact that a very short list of largely female solo artists (Adele, Lady Gaga, Rihanna) currently prop up what remains of the traditional music industry. It’s bad business to bite one of the few hands that still feeds you.

All that having been said, the reason most critics love Taylor Swift is because she’s everything we wait for in an artist. The best pop songs feel instantly familiar, like they’re already downloaded into your psyche, part of the software the human brain comes with at birth. When I first heard Taylor Swift’s “Our Song,” a twangy hit off her self-titled debut, I thought it was a cover, that’s how primary and obvious it felt. When you blend that kind of lyrical easefulness with relatable good looks (boys want to kiss her, girls want to have her over for slumber parties) and a genuine warmth and comfort with the press, you have a superstar. That’s the decades-old equation.

There are two ways to go about calling the mathematics of Swift’s awesomeness into question. You can say you just don’t like the sound of her music; it’s too slick or too country or her voice irritates you. That’s a subjective, to-each-his-or-her-own kind of thing and go with God. The other is to dismiss her as insignificant because she writes songs about how it feels to be young. That is a profound misunderstanding of the fundamentals of pop music. At its core — and this distinguishes it from other genres of contemporary art like film and literature — pop music is about the universality of adolescence. It’s about tapping into the version of our selves that is simultaneously most basic and most complete, the version formed in high school, when, as John Hughes once said, “it feels as good to feel bad as it does to feel good.”

There is nothing more emotionally sophisticated in the Beatles’ “I Want to Hold Your Hand” or Dion and the Belmonts’ “Teenager in Love” or the Crystals’ “Then He Kissed Me” than in Swift’s best songs. And though I realize this will sound like blasphemy to many, Swift’s “Fifteen” could be the sequel to Big Star’s “Thirteen.” 1.2 million 22-year-old girls didn’t buy Swift’s new album, "Red," when it came out last month; 1.2 million moms and older sisters and 16-year-olds and at least a couple of dads and a lot of gay men did because that feeling of being, as Swift puts it, “happy, free, confused and lonely in the best way” never really leaves you. A very brainy male friend of mine in his late 30s who sometimes quotes from medieval religious texts recently got his hands on a copy of "Red" and started inserting lyrics from it into the language of his emails. This girl has serious cross-demographic appeal.

I suspect that when Swift critics accuse her of not being adult enough they don’t mean it. I don’t think anyone who really loves pop music can misunderstand it as a realm for grown-ups. I suspect that what we really disagree about is the packaging. Frere-Jones found an inherent sexism in Guarino’s argument. I’m not going to get into that, but what I will say is I think Swift would be neither as ridiculed nor as successful if she were a dude. More than the token Serious Female Singer Songwriters (Joni Mitchell, Lucinda Williams, Carole King,) Swift reminds me of masters of quirky pop sincerity like Alex Chilton and Jonathan Richman. Mocking an ex for liking a record that’s “much cooler” than hers (as Swift does on “We Are Never Getting Back Together") is so something Richman might do. If these guys had been 6-foot-tall blonds with cupid’s bow lips, they might have been resented by the rock boy demographic. Instead, they are adored.

Lizzy Goodman is a New York–based writer. Her work has appeared in the New York Times Magazine, New York Magazine, Rolling Stone, GQ and Elle. She writes a column for MTV Hive and is currently working on a book about rock in New York City in the new millennium to be published by HarperCollins. She lives in the West Village with two basset hounds.