Is it fair for the media to ascribe a sexual subtext to each of Broadwell's pics with the former general? 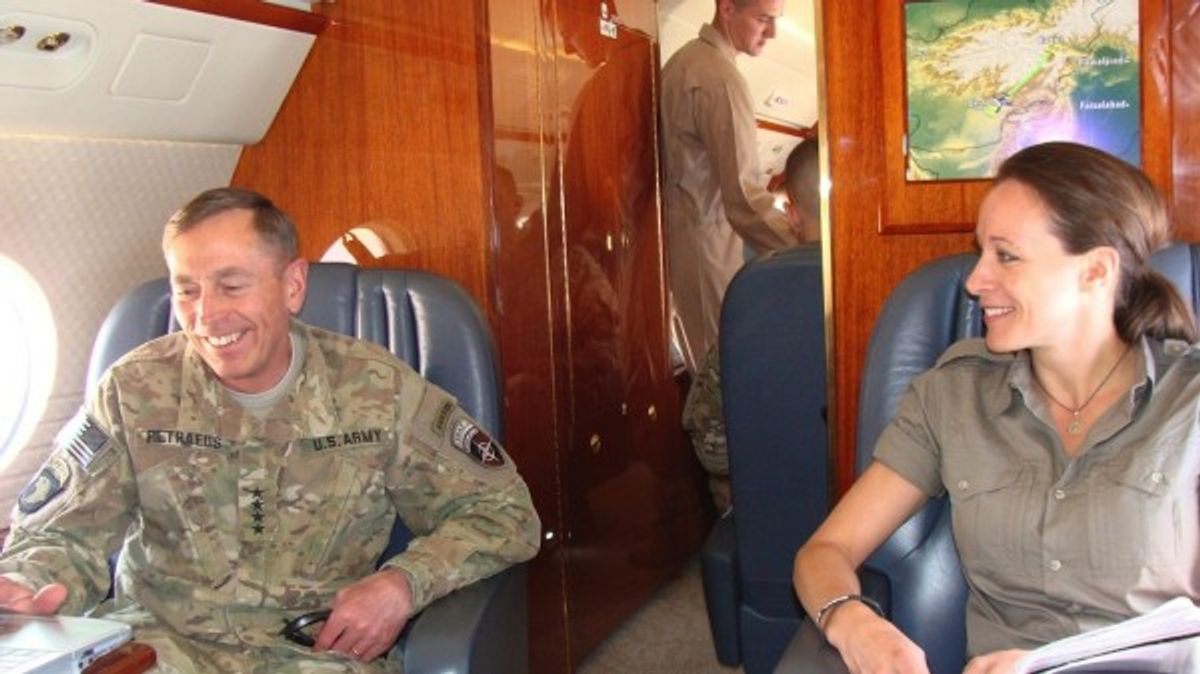 The result [of Broadwell's book] is a work of fan fiction so fawning that not even Max Boot – a Petraeus buddy and Pentagon sock puppet – could bring himself to rave about it, grouching in The Wall Street Journal about All In’s “lack of independent perspective” and the authors’ tendency to skirt conflict. (Boot, the hackiest of the neocon hacks, is now an advisor to Mitt Romney.)

from The Legend of David Petraeus by Michael Hastings. Rolling Stone – 1/31/12

Rolling Stone’s Michael Hastings, clearly no fan of either David Petraeus or Paula Broadwell, wrote the passage above in a critique of her biography of the General back in January. The affair having started in late 2011, is it possible in the line about the biographer as “skirting conflict” that Hastings sensed more going on?

Either way, I’m concerned — as Hastings is — about the real message behind this affair — which for our purposes here dictates how we look at the photos, too. While plenty of people are being distracted by the affair and the lure of analyzing each’s behavior and who-used-who, these questions seem to me to grossly miss the point.

Alluding to the tendency to frame the story in terms of the two lives of Paula Broadwell, Jessica Testa wrote in Buzzfeed:

Her fairly standard business-casual attire was described as “usually tight shirts and pants.” David Petraeus had let down his guard, and this beautiful “lifelong high achiever” saw her big chance.

But Broadwell’s friends say that — if that stereotype ever fits anyone — it doesn’t fit her. That she’s a friendly and genuine person with enough ability to have been successful with or without Petraeus’ help.

“She is a very caring individual,” said a military academic who knows her and asked to remain anonymous.

One colleague of Broadwell’s laughed when I asked if Broadwell was as ruthless and ambitious as she’s being portrayed. “Ninety percent of Washington is ambitious,” he said.

The more I see and hear about Broadwell and Petraeus (not to mention, Washington in general), the more the word “ambitious” sounds like a radical understatement. (Of course, Hasting’s piece, and this brand new one, too, describes how the General’s finessing of Iraq and his power plays in Afghanistan where all part of the gaming and climbing too.) One of the most telling tidbits in Hastings critique of the General has to do with Petraeus lending his time and energy to four different high-profile books about himself written by people who also benefitted from the relationship in one way or another.

The most interesting feature about these two widely circulating photos (taken, I should note, by military PR) is that fawning look. To read into it in a more particular way, I believe, is missing the point. Meaning, it matters far less what it says about Paula’s personal passions or naked ambitions at that moment or even now. Instead, what it offers us right there on the surface is the God-General on his throne, doing what he does best. And what that is is soliciting and basking in the google-eyes of not just one hyper-climbing DC military player and super mom, but the irrepressible passions he’s cultivated from the media, the Congress, and the public too.

What do they say: it’s not about sex, it’s about power? Yes, and about idolatry and hero worship and the cult of personality and PR too.