The media barely noticed, but voters in three states rejected the profit-driven fraud that is education "reform" 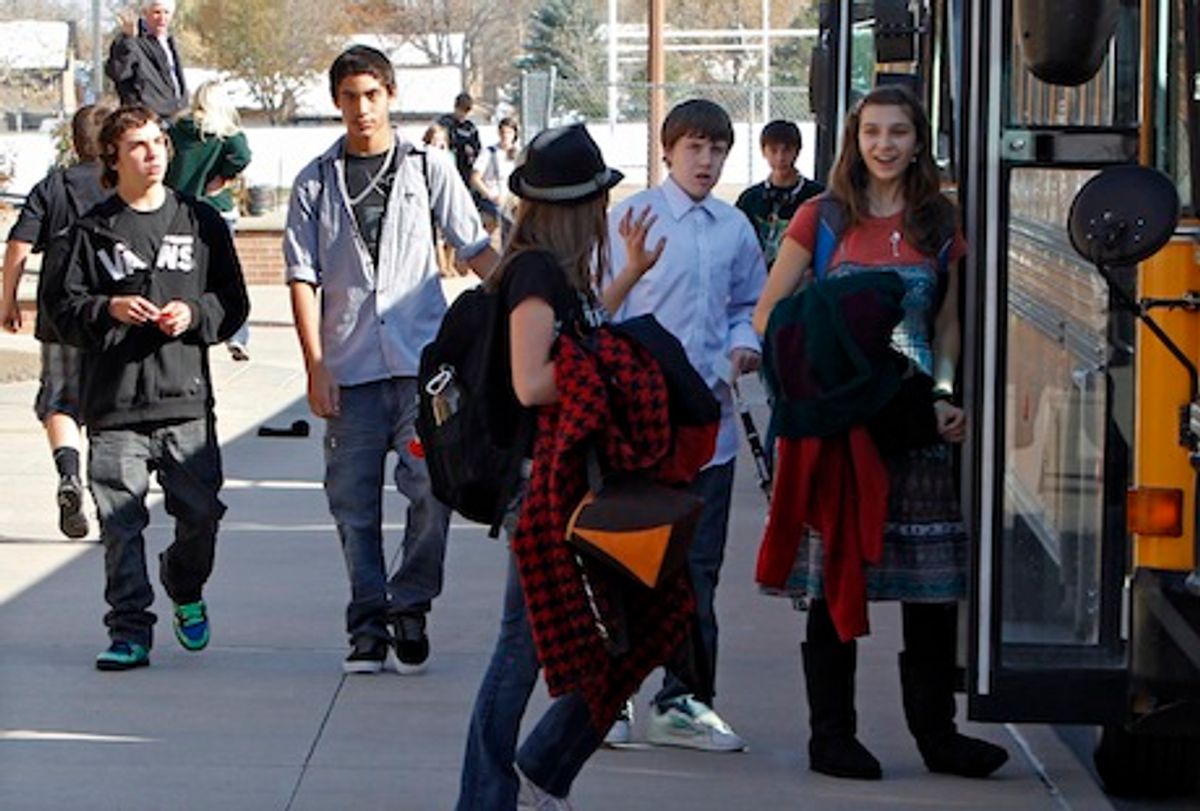 If your only source of news about American education came from docu-propaganda like "Waiting for Superman," Hollywood politi-schlock like "Won't Back Down" and elite-focused national news outlets in Washington, D.C., and New York City, you might think that the so-called education "reform" (read: privatization) movement was a spontaneous grass-roots uprising of good-old-fashioned heartlanders generating ever more mass support throughout the country. You would have no reason to believe it was a top-down, corporate-driven coalition of conservative coastal elites trying to both generally undermine organized labor and specifically wring private profit out of public schools, and you would similarly have no reason to believe it was anything but wildly popular in an America clamoring for a better education system.

In other words, you would be utterly misinformed -- especially after last week's explosive election results in three key states.

In Colorado, the out-of-state, corporate-funded group Stand for Children, which previously made national headlines bragging about its corrupt legislative deal making, backed a campaign to hand the state Legislature to pro-privatization Republicans, specifically by trying to defeat Democratic legislators who have stood on the side of public education. Though the group and its affiliated anti-union, pro-privatization allies have become accustomed to getting their way in this state, 2012 saw them handily defeated, as the targeted Democrats won election, giving their party full control of the statehouse.

In Indiana, the results were even more explicit. There, as the Indianapolis Star reports, Superintendent for Public Instruction Tony Bennett became "the darling of the reform movement" by "enthusiastically implement(ing) such major reforms as the nation’s most expansive private school voucher program; greater accountability measures for schools that led to the unprecedented state takeover of six schools last year; an expansion of charter schools; and an evaluation system for teachers that bases their raises, at least in part, on student test scores." For waging such a scorched-earth campaign against teachers and public education, Bennett was rewarded with a whopping $1.3 million in campaign contributions, much of which came from out of state. According to Stateline, Bennett was underwritten by "some of the biggest supporters of education reform in the country, including Wal-Mart heiress Alice Walton, billionaire financier Eli Broad and New York City Mayor Michael Bloomberg," and NPR reports that he also received big donations from private corporations that stood to profit off his school takeover policies.

Ultimately, he was able to grossly outspend his underfinanced opponent, local educator Glenda Ritz, by more than $1 million. Yet, in the conservative union-averse state of Indiana, he was nonetheless booted out of office in what the Star called "the Election Night shocker." That was thanks not to some brilliantly vague personality campaign by Ritz, but to a substantive, laser-focused assault on Bennett's corporate-driven privatization agenda. As the Fort Wayne Journal Gazette reported, she "attack(ed) Bennett for his school and district accountability system, voucher program and use of student testing data for teacher evaluations"; "criticiz(ed) Bennett’s policies as funneling taxpayer dollars to private companies"; and slammed Bennett's corporate donors -- all while she "advocated returning local control to districts, ending the current administration’s focus on standardized testing and spending more on early childhood education"; and pushed to "provide more support for low-performing schools instead of threatening them with sanctions."

A skeptic might say that crushing defeats in Colorado and Indiana are just a coincidence, and no proof of any transpartisan, national trend in support of public education and against the forces trying to destroy our schools. But then came ultraconservative Idaho. Even more historically hostile to unions than even Colorado and Indiana (and that's saying a lot), Idaho delivered perhaps the most humiliating blow to the education "reform" movement in recent memory.

Back in 2011, Republicans in the crimson-red state's Legislature rammed through a slate of laws that would have limited teachers' collective bargaining rights, tied teacher pay to standardized test results, raised class sizes and replaced teachers with computers in schools (the latter a $180 million boondoggle to the high tech industry without any substantive proof that it would actually improve student achievement). The legislative initiative was led by State Superintendent of Schools Tom Luna, a former Bush administration official whose own election campaign had been financed by firms who stood to make money off his policy agenda.

For its radicalism, the Idaho effort attracted national headlines and billing as a possible model for other states. In response, grass-roots opponents scraped together enough signatures to put veto referendums on the 2012 ballots.

According to EdWeek, the ensuing campaign was fueled by a flood of anonymous out-of-state money laundered through a group called Education Voters of Idaho. Anonymous, that is, until a lawsuit forced the group to disclose its donation list, which (not surprisingly) "included $200,000 from New York City Mayor Michael Bloomberg and $250,000 from Joe Scott, an heir to Albertsons, a grocery-store chain." Also backing the measures was ultraconservative Idaho businessman Frank VanderSloot who "put $1.4 million of support behind the propositions." And yet, despite all the money to ratify corporate "reformers'" education agenda, voters overwhelmingly backed the vetoes.

Inveighing against a political culture that too often demonizes teachers, the Idaho Statesman's editorial board said the election results were a clear message about the education "reform" movement's overall anti-teacher agenda.

"The restructuring plan drew visceral opposition from many of the very people who were tasked with making it work: Idaho’s teachers," said the paper's most recent Sunday editorial. "This was a big reason why the (plan) was unpopular from its introduction in January 2011 — and a big reason why Idaho voters rejected these three laws so resoundingly."

In a separate earlier column, editor Kevin Richert echoed that sentiment, noting that "reform" supporters "overestimated Idaho’s anti-union mindset" in a state where even many conservative voters often have "a sympathetic view of their local teachers."

If the 2012 election only delivered one of these outcomes, or if these results happened in a vacuum, it would be easy to write it all off as a fluke. But taken together in the context of such a well-funded and aggressive "reform" movement, these results are a political earthquake proving that the anti-public-schools coalition of billionaire moguls, millionaire Wall Streeters and anti-union ideologues cannot dictate education policy without serious opposition.

That these results have been largely ignored by the same media and political establishment demonizing teachers, promoting technology as a panacea, and championing privately run charter schools only underscores their importance. Simply put, the election outcomes are ignored because they so powerfully expose the lies behind all the "reform" propaganda coursing through the media and treated as unquestioned fact in our politics. Indeed, just as the larger national election results exposed conservative news outlets as prioritizing ideologically driven wishful thinking over reporting on what was actually happening on the ground, so too do these results expose the "reform" coalition for what it really is: not a popular mass movement, but another profit-driven elite-crafted scheme, one with little proof of educational success and even less mass support throughout America.