Worse than the Petraeus affair? How a cyber-harassment complaint triggered a dragnet that toppled a CIA director 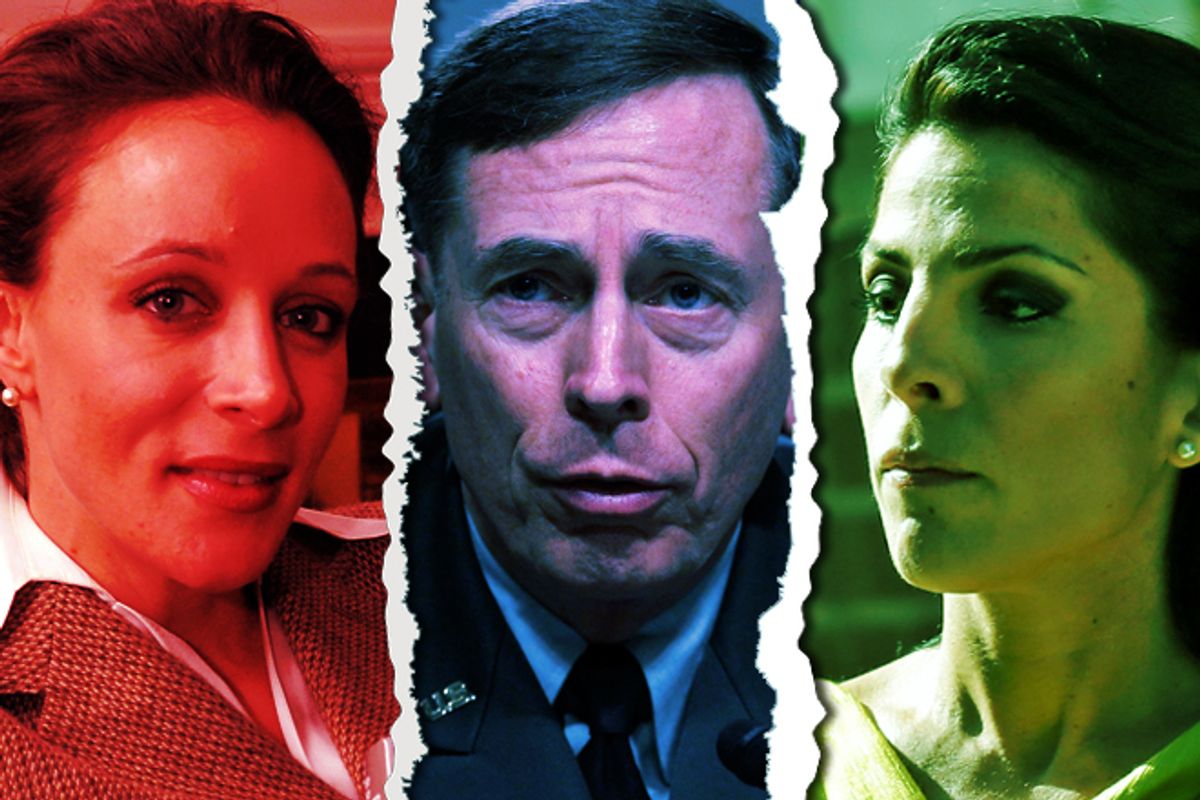 It's hard to stay focused on what really matters in the unfolding David Petraeus story, but there's one issue that every juicy new tidbit only underscores: the way a strange complaint to a lone FBI agent led to an electronic dragnet that toppled the CIA director and may yet bring down the top U.S. military commander in Afghanistan, Gen. John Allen.

I'll admit to rubbernecking at each crazy new detail that emerges – the unnamed FBI agent who trigged the Petraeus probe had earlier sent shirtless photos of himself to Jill Kelley, the woman who asked for his help with anonymous harassing emails? Petraeus and Allen intervened in a child custody case on behalf of Kelley's sister? Kelley, who is of Lebanese Catholic descent, is "a self-appointed go between" with Lebanese and other Mideastern officials? She once cooked alligator on the Food Network?

But the real scandal is the way a complaint about cyber-stalking from a Tampa socialite unleashed the power of the modern surveillance state on Petraeus' biographer and paramour, Paula Broadwell – and ultimately, ironically or not, on the top spook himself.

I frequently miss Glenn Greenwald since he left Salon for the Guardian, but never more than today. He summed up what's at issue in the Petraeus scandal this morning:

So all based on a handful of rather unremarkable emails sent to a woman fortunate enough to have a friend in the FBI, the FBI traced all of Broadwell's physical locations, learned of all the accounts she uses, ended up reading all of her emails, investigated the identity of her anonymous lover (who turned out to be Petraeus), and then possibly read his emails as well. They dug around in all of this without any evidence of any real crime - at most, they had a case of "cyber-harassment" more benign than what regularly appears in my email inbox and that of countless of other people - and, in large part, without the need for any warrant from a court.

By Tuesday afternoon, the New York Times began raising some of the same questions in a story with a typically understated headline: "Petraeus case raises concerns about Americans' privacy." The story quoted the ACLU's Anthony Romero:  “There should be an investigation not of the personal behavior of General Petraeus and General Allen but of what surveillance powers the F.B.I. used to look into their private lives. This is a textbook example of the blurring of lines between the private and the public.” Marc Rotenberg of the Electronic Privacy Information Center told the Times: “It’s a particular problem with cyberinvestigations — they rapidly become open-ended, because there’s such a huge quantity of information available and it’s so easily searchable. If the C.I.A. director can get caught, it’s pretty much open season on everyone else.”

The Times story actually gives federal officials the benefit of the doubt as to whether they violated surveillance guidelines, insisting they used "only ordinary methods" and "might have" gotten grand jury subpoenas and search warrants – which means they might not have. "Presumably," the story adds, Kelley gave the FBI access to her computer, which allowed them to discover Allen's emails – but why "presume" anything at this point? We need an accounting for how and why this investigation, which concluded that neither Broadwell nor Petraeus committed any crime, unfolded the way it did.

Defenders of the surveillance state may point to national security questions about whether Petraeus was a victim of some kind of cyber-attack as a justification for the intrusion into Broadwell's privacy, and then Petraeus', and then the complaining Jill Kelley herself, and then Gen. John Allen. And who knows, by the end, maybe they'll get to the bottom of something that might arguably raise national security concerns. (Marcy Wheeler raises the possibility that Kelley herself had intelligence ties, which might help explain why the FBI took her cyberstalking complaint seriously.) But none of that seems to have been on the table when the FBI decided to open its investigation of Kelley's complaint.

The fact that Kelley's FBI acquaintance eventually went to House Majority Whip Eric Cantor when he felt the FBI wasn't taking the investigation seriously enough just adds another layer of grime to the story. The New York Times reported that the agent "suspected a politically motivated cover-up to protect President Obama." Cantor admits he took the "whistleblower's" concerns to FBI director Robert Mueller – as though Mueller wouldn't know of his own agency's investigation – just 10 days before the Nov. 6 election. While we can't be sure Cantor's motives were political – perhaps an embarrassing White House secret could become an October surprise? – we can't be sure they weren't.

So far there's no evidence that politics drove the Petraeus investigation, from either direction, but the fact that politics was involved should remind us how easily the surveillance state can be used to advance political agendas or settle political scores. Just today Google revealed that it has received more than 16,000 U.S. government requests for user data in the first six months of this year alone (it complies with about 90 percent of requests, the report said.)

Once people get over the latest pageant of human frailty on display in the Petraeus story, maybe they'll realize how much privacy we've all given up in the last decade, under both political parties. As Greenwald notes: "Having the career of the beloved CIA Director and the commanding general in Afghanistan instantly destroyed due to highly invasive and unwarranted electronic surveillance is almost enough to make one believe not only that there is a god, but that he is an ardent civil libertarian."