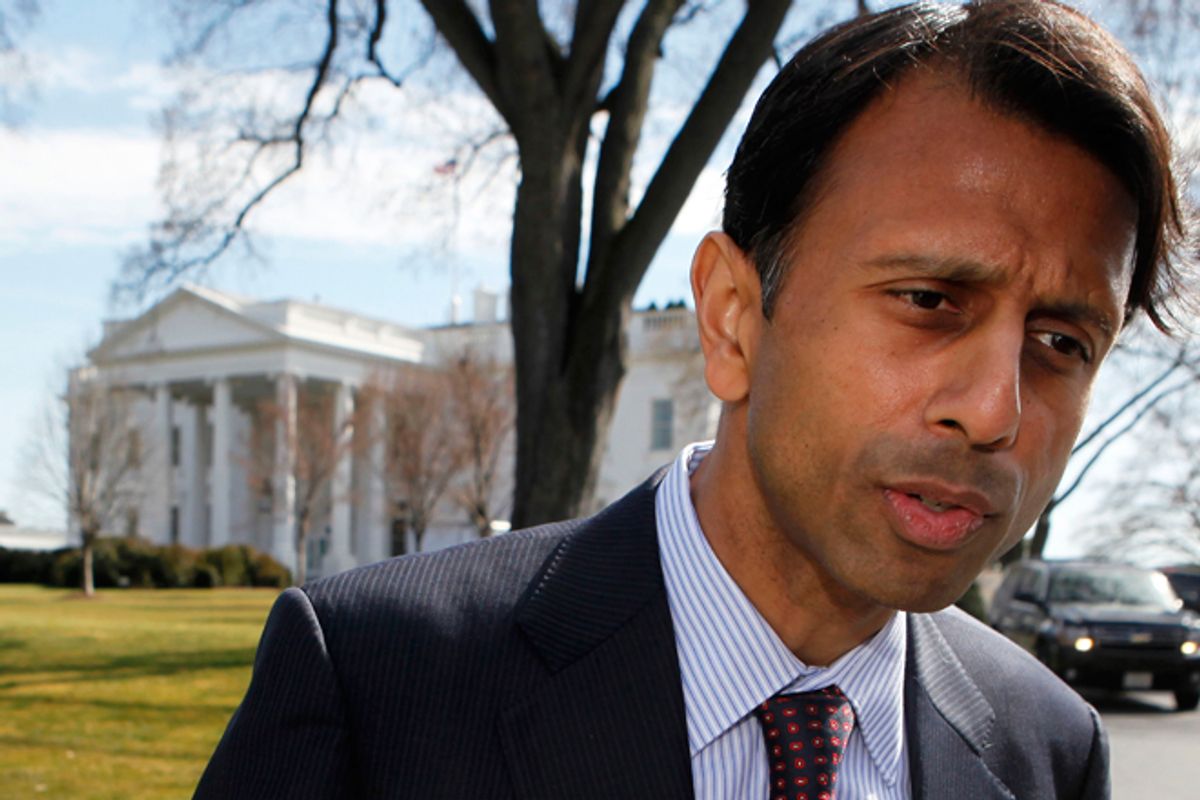 Conservatives with an eye on the future are rolling out their post-election loss "we must remake the party to save it" pitches. In Politico, Louisiana governor and perennial fantasy presidential candidate Bobby Jindal weighs in, getting some positive press for saying, "We’ve got to make sure that we are not the party of big business, big banks, big Wall Street bailouts, big corporate loopholes, big anything." One would think some major policy changes would be required to make the Republican Party cease being the party of big business. One would be wrong.

There are two separate conservative narratives emerging since Obama's shocking-to-them reelection. Everyone in one camp is basically saying, don't overreact to this loss, because a couple thousand extra white votes in Ohio would've won it. The other camp is basically competing to win Andrew Sullivan "Yglesias Awards." (Congrats, Erick and Gov. Jindal! And Bill Kristol, too!) They are sounding, suddenly, very reasonable. They are recognizing the flaws of their side and demanding changes. Just not actually any significant changes.

When you hear Republicans and conservatives soberly intone that Big Changes Will Have to Be Made if they want to Remain Competitive, listen closely for any actual suggested Big Changes. Go through the Politico story on its Jindal interview and you'll see that he is actually not saying anything at all. Jindal is clearly pursuing the same agenda as he was before the election. His point is that this agenda should be branded slightly differently.

This is his prescription: The Republican Party should stop saying stupid things.

The "something stupid" he refers to is all those weird comments on rape, which kept being said because all of these candidates were trying to explain their (mainstream Republican) positions on abortion. Bobby Jindal is not saying "let's moderate our position on abortion," he is saying "let's not talk about it so explicitly." ("On cultural issues, he suggested the party not retreat from its stances opposing abortion rights and gay marriage but rather soften its tone on such matters." Just talk about opposing gay marriage more politely!)

Jindal is playing a very old game: repeatedly and loudly professing to have "Big Ideas" -- Jindal says the GOP must be "the party of ideas, details and intelligent solutions" -- and decrying "bumper sticker politics" while pushing the exact same agenda as everyone else in your party. It's a close relative of Paul Ryan's "I'm a wonk" game, and both work because the political press is more comfortable with branding than policy.

So, Gov. Jindal, if your goal is to make sure people don't see the GOP as the party of the rich, shouldn't the Republican Party maybe back off on its pledge to never raise taxes on rich people? Eh, not so much.

Jindal said he didn’t want to see tax rate increases but called for broad tax reform to rid the code of loopholes and make it fairer for more Americans.

“Depending on the other reforms that are made, certainly I’d be open to the idea of having more deductions, credits available to lower-income [filers],” he said.

That's ... adding more "loopholes," just ones targeted at poor instead of middle-class people.

The only actual slightly unconservative policy Jindal endorses is some form of the Volcker Rule. On everything else his message is stay the course while pretending to be headed on a very different, better course.

This isn't really shocking: The Republican Party is stuck with the leadership it has. The movement conservatives long ago took over, and it would be very odd if they all stopped being movement conservatives. In 1996, after the Republicans failed to unseat a president they hated, they blamed their too-moderate candidate and then slapped the label "compassionate" on their existing beliefs. They will likely do something very similar this time.

It would just be nice if the press pointed out that almost none of their longtime policy proposals are likely to change, because they haven't really changed any of the big ones in a quarter-century.