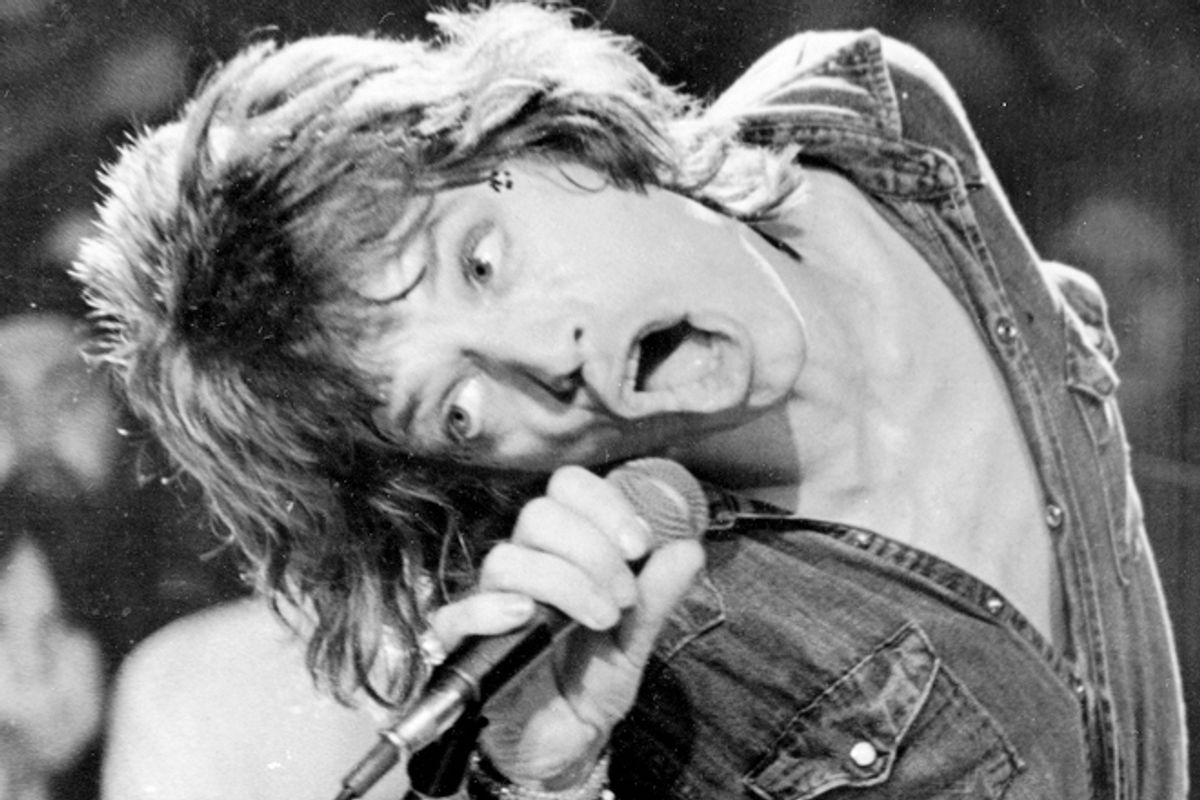 Hail, hail the Rolling Stones, for making it to the half-century mark, relatively intact.

Pioneering a career that has lasted as long as it has, filling arenas 50 years in, with shows that still have edge and swagger, is a remarkable achievement. Maybe more of an achievement than breaking through in the early days, remaking American blues, forcing themselves to write their own material, and creating a mystique that became almost bigger than the band, though not big enough to ward off the epic bad vibe that was Altamont.

It is those early days and the first 25 years of the band that are the sole focus of the new golden anniversary film they threw themselves, “Crossfire Hurricane,” making its debut on HBO Thursday night.

The surviving members of the band, listed as producers, all willingly contribute to the story with their own commentary. But because it’s also so much under their control, nobody is allowed to see what they look like today, as if that would undercut the whole thing. A number of great films have already been made about the Stones, so it’s no surprise that a lot of that footage makes its way to the meat of this one as well, particularly the Maysles brothers’ “Gimme Shelter,” maybe the best rock movie ever. That doc managed not only to capture the excitement of the band’s 1969 tour, which helped define what arena rock tours would be forever more, but also documented the band as they recorded some of their best songs in Muscle Shoals, Ala., and confronted the devastating violence of Altamont, where no tailfeather shaking of lead singer Mick Jagger could undo the deadly malaise that set in, something bad enough to put an end to the Woodstock era — the same year it started.

There's something ironic about the fact that the Stones would be there when it happened, playing “Sympathy for the Devil.” From the beginning they were marketed as bad boys, a kind of anti-Beatles — their managers knew they would go far.

Most of the unfamiliar footage of “Crossfire Hurricane” occurs here as the band just is beginning, answering angelically each interviewer's question instead of slogging them off entirely, as they would do the rest of their career, or playing to young crowds so charged up that every single show for two years was busted up by the sheer frenzy of the fans — an amazing thing to watch.

The major themes of the Stones are seen mostly through the footage of films we know, from the decline of Brian Jones in Godard’s “Sympathy for the Devil” to clips from their “Rolling Stones Rock and Roll Circus,” Robert Frank’s “Cocksucker Blues” and the just-released “Charlie Is My Darling: Ireland 1965.”

Brett Morgen, who stylishly depicted the work and life of producer Robert Evans in “The Kid Stays in the Picture,” is kept on a tight leash. And while there is always another clip or song of interest, there’s a lot lost in the middle.

The death of Brian Jones is covered, as is the addition of new guitarist Mick Taylor, who may have helped lead the band to a golden age. But there’s more about Taylor’s departure than that of Bill Wyman, the founding bassist who was there from the beginning and has been gone for nearly 20 years. But that’s mostly because the band treats the past 25 years as a kind of “happily ever after” that isn’t covered at all.

It’s plain to see that they did Slim Harpo and American blues, but nobody talks much about music in the film. Indeed, the band’s secret is mentioned only briefly by Wyman: with drummer Charlie Watts playing a fraction of a second behind Keith Richards and Wyman playing just ahead. Richards observes that “Midnight Rambler” is the perfect Jagger-Richards example – nobody else could have written that song “or would have thought to turn an opera out of the blues.”

The one running narrative of the Stones – the tension between Mick and Keith — is never mentioned. But even more amazing is that, for all he’s been credited with the band in other biographies, neither is the late keyboardist Ian Stewart. And then there are contradictions in early interviews when Jagger says he’s not acting, compared to others not much later saying that it’s all an act.

Those clips of early blues covers are really good, as is one backstage scene after they started writing their own songs, coming up with “Sitting on a Fence” and “Tell Me.”  They were caught up in the 1960s uprisings as much as anybody was, but were never leaders in it (“What can a poor boy do, but sing in a rock n’ roll band?” he lamented). But drugs were part of their world, and the press and police were set to make examples of them, most tellingly with London’s notorious News of the World tipping off police that they should make drug arrests at Keith Richards’ house after a Sunday’s tripping.

“I’m not interested in your petty morals,” Richards told his judge and he got a one-year sentence; both he and Jagger were out after a day in jail. As the '70s went on, there was a fundamental dysfunction to the Stones that had nothing to do with the disarray and chaos of recording and backstage antics.

Nobody seems to know why Mick Taylor left the band, even now, though he tells the filmmaker he needed to get away from the drugs. And as much of a drag as that seemed to the band, largely in hindsight, having the very simpatico Ron Wood join the band is seen as the culmination of the story that has since been perceived as virtually unchanged. And that was 1975.

Keith’s Toronto bust in 1977 is seen as his own turning point, ending the addiction to save the band, if not himself. “If there’s one thing more important than smack, that’s the band,” the disembodied Richards says today. "I was quite relieved he cleaned up some,” Jagger says. That kind of selflessness has kept the band rolling this much longer, but in “Crossfire Hurricane” it’s just about the end of the film.

If the Stones themselves can’t find anything to say about the band’s last quarter-century, should their surviving fans also treat them only as a still-traveling nostalgia object?