Forget all the hand-wringing about the fiscal cliff. The president needs to set his sights on unemployment 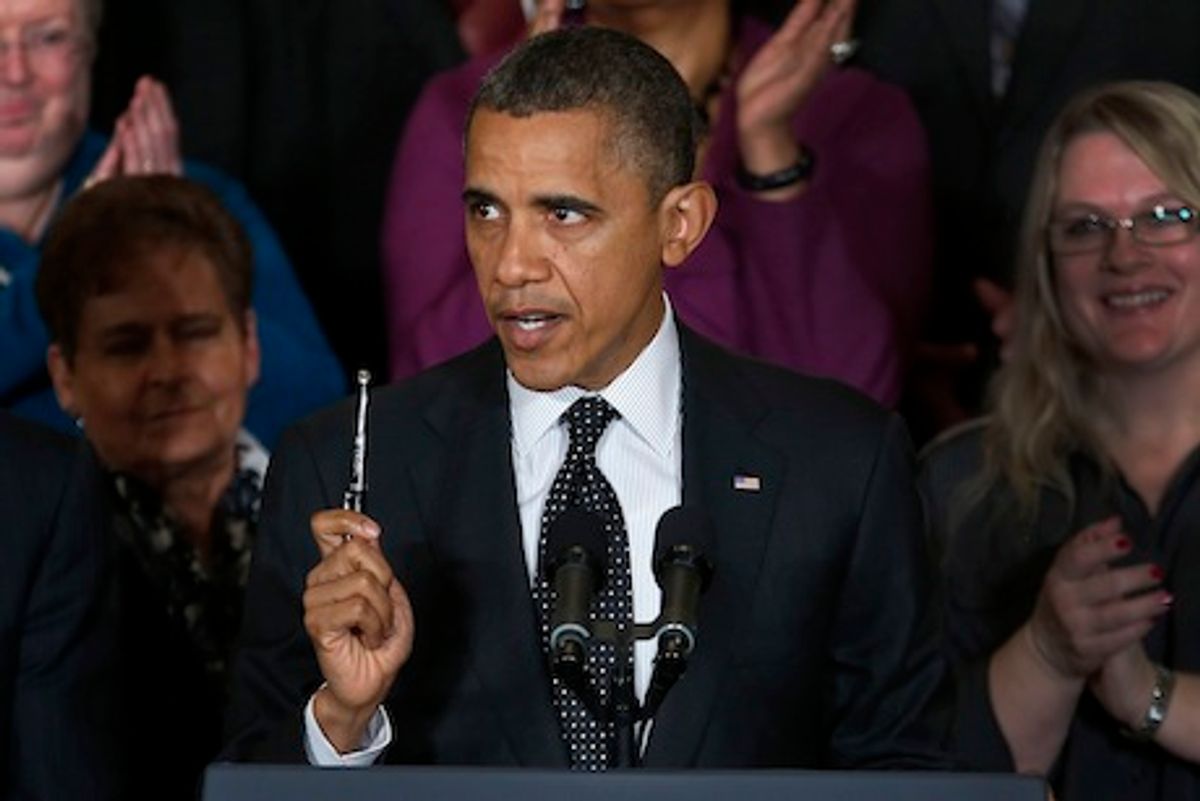 The presidential victory of Barack Obama was an important vindication for the uses of government. The small-government ideologues were defeated, but now the nation must go farther and recognize government is indeed a job creator.

Let’s begin with the harsh facts: Neither policymakers nor the media fully understand or communicate that America has a jobs emergency. In his victory speech last Tuesday, President Obama did not even cite job creation as one of his four main goals for the new term. Not only is unemployment high, but wages are stagnant and poverty is rising in an economic recovery. The evidence on the creation of low-wage jobs rather than high-wage jobs is almost frightening; the Roosevelt Institute’s own Annette Bernhardt has been a leader on this.

Our mainstream economists are not of much help. Many, though not all, are loathe to blame globalization for low wages in America. We hear almost nothing from them regarding Wall Street’s role in wage suppression, although American business was obsessed with creating rising short-term profits to appease Wall Street, which rewarded such consistency with high stock prices. Add to this the pressures of LBOs, privatizations, and hostile takeover threats. Little is discussed of the role of the Federal Reserve in maintaining a tight monetary policy until the late 1990s, in my view suppressing wages as an objective. Finally, almost nothing is heard of the benefits of adequate demand, except in the current crisis, in creating productivity growth over the long run, even as China and Japan have clearly suffered secularly from a lack of demand.

All of these mainstream economists warmly support the view that skill-biased technology is the main cause of stagnating wages. But such technologies cannot explain the runaway of incomes at the top. Nor can they explain the lesser inequality in Europe, which is also subject to technological change.

In my view, we need a very aggressive, jobs-related agenda. This includes aggressive fiscal stimulus over the next two years amounting to as much as $500 billion and focused on infrastructure, aid to the states, and extending unemployment insurance. These will meet dire needs and also will have the most GDP bang for the buck.

The minimum wage should be raised to end poverty for all those who work full-time, and a living wage, or something close to it, should be demanded for all federal contracts.

Policies to help our trading partners develop a progressive revolution, including higher wages, the right to labor organizing, and decent labor conditions should be emphasized. As reflected in the Trans-Pacific Partnership, the opposite is occurring. All emphasis is on protecting investors, very little on workers. This would also go some way to creating a more level playing field in trade.

A federal jobs-creating program, similar to those in the New Deal, should be undertaken, emphasizing construction jobs in public works, teaching, and care workers. Tax rates should be raised sharply on the well-off to ameliorate the temporary increase in the federal deficit. Such taxes will not reduce the GDP multiplier very much.

Wall Street pressure to cut wages must be softened. Business executive compensation must be more closely aligned to long-term results. The tax deduction on borrowing for LBOs, privatizations, and corporate takeovers should be sharply reduced or eliminated.

In addition to these immediate needs, there are three longer-term policies we must pursue. First, in three years or so, America will need a sharp tax increase. Its average tax rate, including federal, state, and local, is 10 percentage points below the OECD average. If that is reduced to five percentage points, it would raise nearly $1 billion more a year. There is little evidence such an increase would impede economic growth.

Second, any such tax increase should only partly be used to pay down the debt. It should be used to shore up major entitlements programs, develop a public option for health care, and increase infrastructure and education spending.

Finally, although educational deficiency is not the primary cause of the current wage problem, it will be in the long run. A major educational equalization campaign is necessary, which includes pre-K for all.