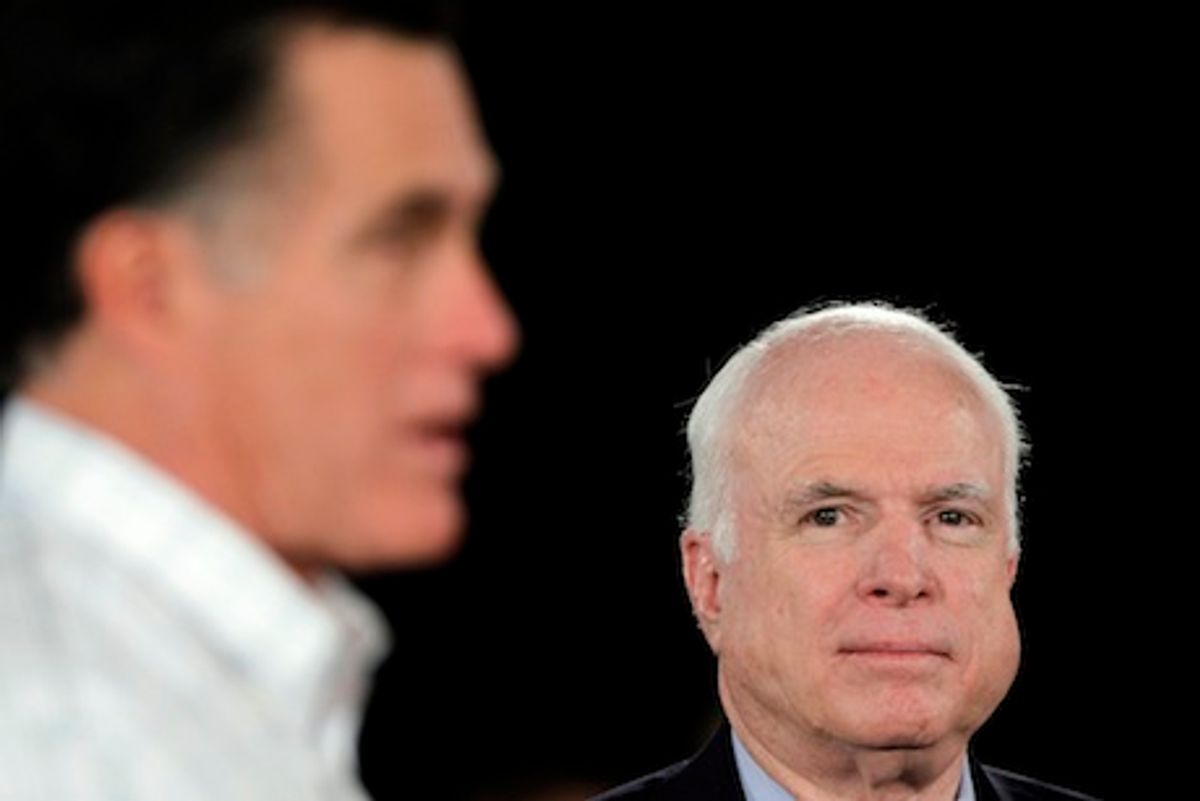 Sometimes, losing national candidates actually manage to enhance their reputations in defeat. The most famous example of this is probably Bob Dole, who growled his way through the 1996 campaign but then turned in a winning performance on David Letterman’s “Late Show” a few days after the election, giving rise to something of a post-political career as a humorist. Al Gore knows something about this too; his concession of the 2000 election earned him respect that had eluded him throughout that campaign.

Based on their conduct since last week’s election, though, it’s safe to say that the two most recent national losers won’t be joining this company any time soon.

Mitt Romney has been publicly quiet since his brief remarks on election night, but he told his top donors on a conference call yesterday that Barack Obama had won by giving “very generous” freebies to key constituencies, including blacks, Hispanics and young people.

“The president’s campaign,” Romney said, “focused on giving targeted groups a big gift, so he made a big effort on small things. Those small things, by the way, add up to trillions of dollars.”

Romney surely didn’t mean for his remarks to become public, but he probably shouldn’t be surprised that they leaked. After all, the same thing happened when he told donors earlier this year that 47 percent of the electorate would vote for Obama “no matter what” – because they “believe that they are victims” and that “they are entitled to health care, to food, to housing, to you name it."

A tape of those comments emerged in September, and Romney eventually repudiated them and spent the rest of the campaign insisting that he would be a president for “the 100 percent.” That he’s still disparaging Obama’s coalition behind closed doors all but confirms that his campaign trail pleadings were insincere. It also reinforces the worst image of Romney, as a sneering plutocrat who has contempt for the common man.

But mainly, it’s just bad form. Romney was roundly defeated last week, and the man who defeated him has now publicly saluted him twice. This is the time for Romney to show grace, humility and maybe some humor too. Instead, he’s coming across like a sore loser, one who’d rather make excuses than give his opponent any real credit.

The same can be said for Romney’s running mate, Paul Ryan. During a series of interviews on Tuesday, Ryan offered this backhanded compliment to the president: “Well, he got turnout. The president should get credit for achieving record-breaking turnout numbers from urban areas for the most part, and that did win the election for him."

This too smacks of sore loser-dom. Ryan’s ticket lost in swing states without major cities, like Iowa and New Hampshire, and another key battleground – Virginia – by racking up massive margins in affluent suburbs. And if Ryan was using “urban” as a substitute for “black,” he’s off the mark there too. Sure, Obama received overwhelming support from an unusually energized African-American electorate, but he won plenty of states with small to nonexistent black populations. The Obama victory last week was far broader than Ryan’s comment suggests, and rooted not just in demographics but also a very basic advantage on most of the issues that mattered most to voters. As with Romney, this is bad form – the sort of thing that might sound good to conservative die-hards but that comes across as tone deaf to just about everyone else.

Romney and Ryan have an excuse, of course: It was only last week that they lost, so the wounds are still raw. The question is whether they’ll end up like John McCain, who is still clearly not over his loss to Obama four years ago.

As I’ve written before, McCain’s various self-reinventions as a politician are best understood as acts of sore loser-dom. A decade ago, for instance, he took up a sudden interest in closing the gun show loophole, enacting a patients’ bill of rights, and stopping tax cuts for the wealthy. Not at all coincidentally, this came just after he’d lost a bruising campaign against George W. Bush. Bush and his team had been rough – very, very rough – on McCain, and McCain had deemed them unworthy victors. His sudden cooperation with Democrats in 2001 was his version of payback, giving the new Bush White House fits.

When he lost to Obama in 2008, McCain shifted in the other direction, becoming a more reliable Republican vote in the Senate and playing a leading role in the right’s attacks on the new president. At a 2010 White House summit on healthcare, McCain communicated something approaching contempt for Obama, and he threw himself into Romney’s campaign against the president this year. Nor is he giving up in the wake of the election. Along with Lindsey Graham, McCain is now the GOP’s point-man for going after U.N. Ambassador Susan Rice over the Benghazi incident. This week, McCain vowed to filibuster her nomination if Obama chooses her to run the State Department, a threat that prompted an unusually heated response from Obama at his Wednesday press conference.

“When they go after the U.N. ambassador,” Obama said of McCain and Graham, “apparently because they think she's an easy target, then they've got a problem with me."

Obviously, McCain got under the president’s skin, which surely makes him happy. But this is probably short-sighted. For years, McCain was one of the most popular politicians in the country. His reputation took a hit in ’08, but he had an opportunity to restore it in defeat. Instead, he’s behaved like an embittered partisan warrior. And so far, it’s an example that Romney and Ryan are following.