The offensive in Gaza won't end Hamas' rule there, so what does the country hope to achieve? 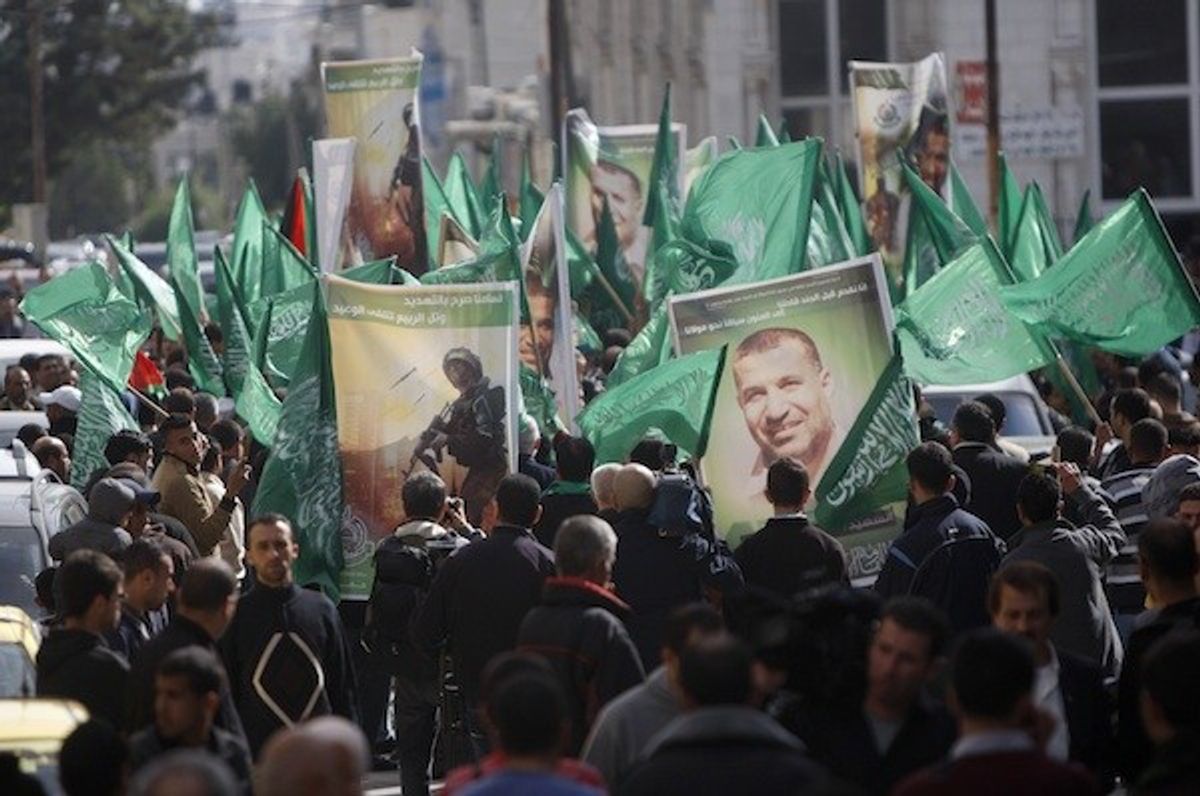 Hamas supporters in the West Bank city of Ramallah carry obituary posters of Hamas mastermind Ahmed Jabari as they march in support of the people of the Gaza Strip. (AP/Majdi Mohammed)
--

The rocket that landed in the Mediterranean Sea south of Tel Aviv yesterday represents yet another troubling escalation in the Israeli-Palestinian conflict. Not since the 1991 Gulf War, when Saddam Hussein’s Scud missiles fell on the city, has Tel Aviv come under similar missile attack. There are reports of more rockets fired at Tel Aviv this morning, and the world waits to see whether the 160,000 Israeli reservists called up today means a ground invasion of Gaza similar to 2008-2009’s Operation Cast Lead.

As for Hamas’s future in Gaza, let me end the suspense: The Israeli offensive which began on Wednesday with the assassination of Hamas military commander Ahmed Jabari, who was reportedly considering a long-term cease-fire at the time, will not result in the end of Hamas rule there. Hamas has spent the last five years entrenching its political control of the Strip, severely limiting the activities of competing groups. (As one Fatah activist put it to me when I visited Gaza last February, “We [Fatah] almost don’t exist in Gaza anymore.”) Nor, most likely, will the operation end the problem of intermittent rocket attacks against southern Israeli cities, whose homemade launchers are fairly easy to conceal, though it will degrade militants’ longer-range capabilities, which require more hardware to operate and are thus easier to locate and destroy.

A senior Israeli official acknowledged much of this in an interview last month, before the current round of escalation began. “If worst comes to worst, we can (launch) a much wider operation in Gaza. But that is not going to really solve the problem,” said Yossi Kuperwasser, director general of the Israeli Ministry of Strategic Affairs. "Most of the [rocket] activity is coming now not from Hamas," Kuperwasser added, noting that Islamic Jihad—a more extreme militant faction—was receiving a relatively bigger share of the weapons that had been “pouring into Gaza” via a network of smuggling tunnels on Gaza’s southern border with Egypt.

It’s important to understand the current violence in context. Having taken control of Gaza from Egypt in the 1967 war, Israel withdrew in 2005 (though both the United Nations and the U.S. State Department still consider Gaza to be under Israeli occupation). Having won a majority of seats in the Palestinian parliament in elections in 2005, Hamas wrested control of Gaza from its rival Fatah in 2007 in a short but violent war. Israel responded by tightening the Gaza blockade that it had implemented in response to Hamas’s capture of Israeli soldier Gilad Shalit in 2006, severely restricting the amount of goods and supplies that could enter.

The limits on goods like produce and construction supplies quickly gave rise to a massive black-market trade through the smuggling tunnels beneath Rafah in the southern Gaza Strip. As I reported in February, taxes levied on this trade by Hamas allowed the group to challenge the external leadership (which had been based in Damascus but which broke with Syrian dictator Bashar al-Assad over his 2011 crackdown on protesters) over things like reconciliation with Fatah, on which the Gaza leadership insisted that it hadn’t been appropriately consulted.

In other words, a policy with the stated goal of weakening Hamas in Gaza has not only had the effect of strengthening its rule there but also resulted in the proliferation of tunnels through which terrorist groups have been able to obtain weapons.

In any case, if the past is any guide, Hamas will still be there after the fighting has died down. After more rockets have been fired and bombs dropped, and more people have died, Israel will claim that “deterrence has been re-established,” and Hamas will declare victory by virtue of the fact that it had, once again, faced down the Zionists’ military might and survived. While Hamas remains officially committed to Israel’s destruction, its leaders have in the past enforced cease-fires with Israel, which has drawn the criticism of even more extreme factions like Islamic Jihad and Salafi-Jihadist groups, who consider Hamas too moderate. Indeed, if Hamas’ control of Gaza were significantly degraded, it’s most likely that these groups would rush to fill the void, which would be disastrous for all involved.

Palestinian President Mahmoud Abbas, on the other hand, may prove to be the most significant casualty of this episode. He was the biggest political loser of the last Gaza war, where the perception was that he supported the attack against his rivals. Abbas’s failure to achieve any tangible goods for the Palestinians, either through now-dead negotiations with Israel or through his half-hearted efforts to upgrade Palestine’s status at the U.N., make him more irrelevant by the day. It seems likely that this latest round of war will end with Israel’s most implacable enemy still in place and its more moderate peace-partner even more weakened.

It’s not entirely clear what Israel attempted to achieve with this latest offensive beyond destroying militant groups’ longer-range rocket capabilities. The insistence by Israeli officials of Israel’s right to defend itself is not really on point. No one seriously disputes that Israel, like any country, has a right and obligation to defend its people. What is in dispute are the means by which Israel exercises that right, the context—i.e., an ongoing military occupation—within which it is exercised, and the goals it can realistically achieve, and at what cost.

In the same interview quoted above, Director General Kuperwasser acknowledged that “radicalism is gaining power” in Gaza. “This atmosphere drives people to extremist ends.” It’s likely that enduring yet another military onslaught will only worsen that atmosphere. While this latest operation may provide Israel with momentary calm, it will not address its longer-term security concerns and only exacerbate its isolation in the region.

It should go without saying that rocket attacks on Israeli civilians, in addition to being war crimes, do absolutely nothing to further the Palestinian cause. While bringing an end to those attacks is the immediate goal, the broader challenge for the U.S. and its regional partners is to develop a stronger set of incentives that, instead of simply periodically punishing extremism, rewards moderation through a genuine easing of occupation and closure, with the stated goal of ending both.