The former CIA chief testifies about Benghazi, and lawmakers hear what they want to hear 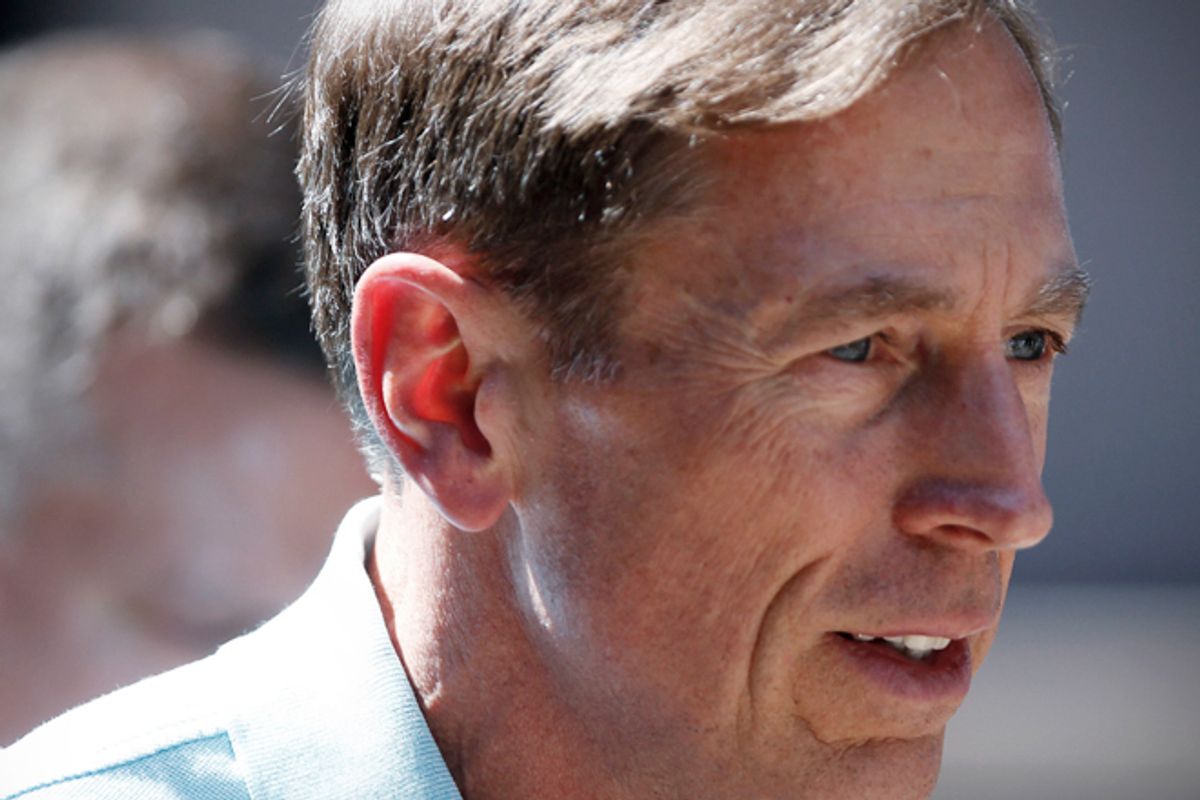 What happened at today’s much-hyped congressional hearings featuring disgraced former CIA director David Petraeus? It’s hard to say, since the hearings were classified and reporters were not even allowed to see Petraeus enter and leave, let alone listen to him speak.

To judge by what representatives of each party told the press after the hearing, you’d think they attended entirely different meetings. Republicans seem to think that Petraeus completely undercut the Obama administration’s account of the attacks on U.S. diplomats in Benghazi, Libya, while Democrats insist he backed up that account.

"The fact is, the reference to al-Qaida was taken out somewhere along the line by someone outside the intelligence community ... We need to find out who did it and why,” said Republican Rep. Peter King, the chairman of the House Homeland Security Committee, who attended the first of two back-to-back hearings with Petraeus. (The second was with senators.) "The general was adamant there was no politicization of the process, no White House interference or political agenda ... He completely debunked that idea," said Democratic Rep. Adam Schiff of the very same meeting.

The hearing has been the most anticipated event in Washington all week, bringing together two of the capital’s hottest stories -- Petraeus’ abrupt resignation over an affair with his biographer, Paula Broadwell, and Republican allegations that the administration has lied about its (mis)handling of the attack on the U.S. embassy in Benghazi on Sept. 11, which claimed four American lives. It was unclear whether Petraeus would testify when he resigned last Friday, but Republicans insisted. (The sex scandal did not come up at all during the hearing; that’s one thing Democrats and Republicans agree on.)

The entire 180 minutes of hearings focused on Benghazi, which Republicans have been trying to turn into a Watergate-level scandal for President Obama ever since it happened. This scandal, as Republicans see it, is that administration officials intentionally deceived the American people in the immediate aftermath of the attack by claiming that the violence grew out of a spontaneous street protest over a crude anti-Muslim film.

It turned out there was no protest outside the consulate in Benghazi, but Democrats defend the administration on the grounds that its initial account of the attack was based on flawed intelligence. Republicans allege that intelligence showing the attacks were orchestrated by terrorists was suppressed for political reasons.

As the director of the nation’s premier intelligence organization at the time, Petraeus presumably could put this all to rest. But did he?

King, leading the charge for House Republicans, claimed that Petraeus said that the CIA maintained all along that the attack was the work of terrorists, but that “talking points” produced by the agency were changed -- a reference to al-Qaida was removed -- as they made the rounds to other federal departments, including State and Justice.

Democrats, however, say Petraeus said nothing of the sort, either then or since. "Gen. Petraeus as director of the CIA has been completely consistent,” said Democratic Sen. Kent Conrad, who attended the Senate Intelligence Committee briefing.

Republicans countered that Petraeus testified to Congress on Septe. 14 that the attack was an outgrowth of the protest. So the new front line in this debate consuming America’s most powerful people is characteristically absurd: Who has the better recall of what was said two months ago? "My recollection was ... [Petraeus said] it was the result of the protest ... but he also said in the group there were some extremists and some were al-Qaida affiliates,” said Democratic Rep. Dutch Ruppersberger. King fired back, "I told him ... I had a very different recollection of that."

Apparently the members did not take notes at the Sept. 14 hearing. Fortunately, we have Google. Here's what ABC News reported Petraeus said way back in September: The attack "began as a spontaneous protest against the film 'The Innocence of Muslims,' but Islamic militants who may have links to Al Qaeda used the opportunity to launch an attack." Essentially the Democrats' position. Unfortunately, that briefing was also closed to the press, so any reports from it are subject to the same partisan spin.

So where does this leave us? First, wishing we actually knew what Petraeus said. “We didn’t want to make it any more difficult [for Petraeus] and you people aren’t always the easiest, so you can blame it on us ... We wanted to spare him that,” Democrat Dianne Feinstein, the chairwoman of the Senate Intelligence Committee, told grumbling reporters of her decision to bar the press. Lest photographers get even b-roll of the retired general entering or exiting, Capitol Police shut down the hallway where Petraeus entered and exited.

Second, some good news for U.N. Ambassador Susan Rice. She's a top pick to replace Secretary of State Hillary Clinton, but Republicans, led by Sen. John McCain -- seeing a ripe opportunity to stick it to Obama -- have threatened to block her candidacy, since she was the most pr0minent administration official to push the "spontaneous protest" narrative in the days after the attack, most notably on the Sunday morning political talk shows.

McCain had already been losing his war on Rice, at least in the media's estimation, especially after he launched a tirade at a CNN reporter yesterday who asked him why he skipped a hearing on Benghazi while simultaneously demanding more information on Benghazi. With no clear narrative emerging from Petraeus’ testimony -- certainly no smoking gun incriminating anyone in the administration -- Rice’s stock goes up while McCain’s goes down. Indeed, Republicans toned down their anti-Rice rhetoric after the hearings, as BuzzFeed’s John Stanton noted.

Here's hoping the hearings will expose the absurdity of the Republican scandal-mongering in the first place. The entire controversy and anti-Rice case is built on a fundamentally incomplete reading of what the administration actually claimed in the wake of the attack. While the administration did say the attack grew out of a protest, they never said there was zero terrorist involvement. In fact, they said the opposite. “And then as [the protest] unfolded, it seems to have been hijacked, let us say, by some individual clusters of extremists who came with heavier weapons,” Rice said in the very Sunday show appearances after the attack that have been used against her.

That’s very different from claiming the attack was a purely organic protest, which is what Republicans claim she said. In fact, as Slate's Dave Weigel pointed out, it was McCain himself who was “the key figure in spreading this lie about Rice.”

We may still be clueless about what went on inside that hearing room today, but maybe we can all just move on?