On the surface, Tolkien's world appears chaste — until your Freudian eyes look down and see those big, hairy feet! 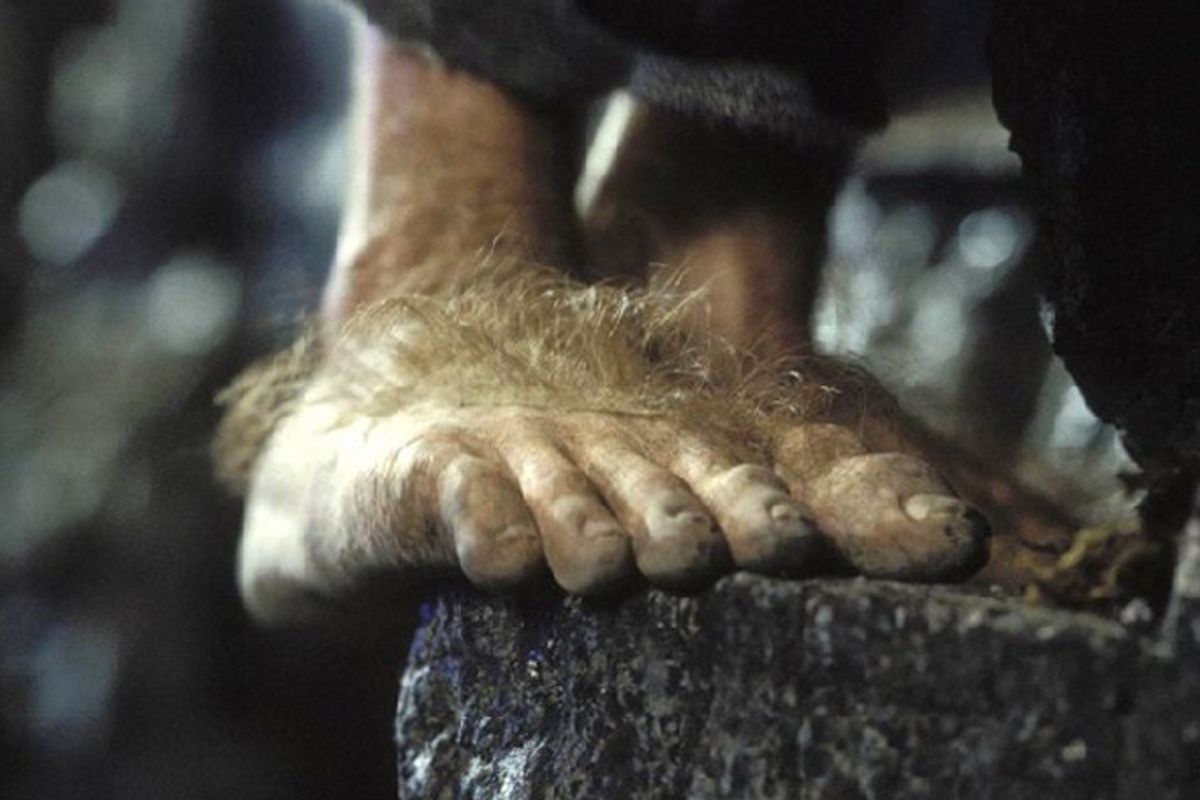 If there’s anything that can shut down a healthy libido — anything that might be reasonably considered the opposite of “hot” — it’s tragic nobility. And if anyone's bearing such an affliction in literature, it's J.R.R. Tolkien's heroes — to the nth degree.

Tolkien drew inspiration for his invented world from the ballads and sagas of the Anglo-Saxons, who ruled England intermittently (there were a few awkward Danish occupations) for a handful of centuries preceding the Norman Conquest. After the Conquest, Anglo-Saxons remained the predominant demographic in the country, but the Normans completely took over as the ruling class, establishing one of history’s first examples of the 1 percent versus the 99 percent, which lent the Anglo-Saxons a kind of tragic nobility in the imaginations of succeeding centuries.

This is the problem for Tolkien's heroes: They’re on the precipice of a similarly devastating loss of authority, dignity and autonomy to the expansionist evil of the wizard Sauron — scarcely the kind of situation in which getting your freak on is a priority. And when you factor in the near absence of female characters in the novels, the whole idea of sexuality becomes close to academic. In all six gazillion pages of "The Lord of the Rings," there’s only Galadriel, an elf-queen of such rigid dignity she might snap in two if she ever bent over; Eowyn, a fiery gender-bender who’s more bent on killing than kissing; and Arwen, another elven royal whose part (played by Liv Tyler) is astronomically beefed up in the "Rings" films to better function as a romantic foil to Viggo Mortensen’s Aragorn.

Now, granted, if you’ve got Liv Tyler and Viggo Mortensen making cow eyes in the silver moonlight at Rivendell, you can’t help generating some fairly serious heat. But there’s nowhere very funky you can take it, because it’s incidental to the main story, of which you’ve got about a 180 minutes still to cover in any given film in the trilogy, and never mind the director's cuts.

And in "The Hobbit"? Well, in that book, the whole concept of femaleness goes beyond the incidental, and even the irrelevant, right on into the invisible. There may be no more utterly male-dominated property in all of popular culture, with the possible exception of "Glengarry Glen Ross." It seems, from the trailers, that the upcoming film adaptation loops in Cate Blanchett’s Galadriel for some backstory (or side story, or whatever-story), but that can no more amp up the film’s steaminess factor than, say, plugging Margaret Dumont into "Stalag 17."

Modern audiences, however, are accustomed to heroes who manage to squeeze in some TLC — or, these days, some light S&M — between the explosions and the hail of bullets. (This isn’t even an exclusively modern tradition; in "The Iliad," the gods rescue Paris from certain death by plucking him from the battlefield and depositing him back in Troy, where he gladly seizes the chance to get horizontal with Helen.) We’ve come to accept that heroism is less about tragic nobility than pathological recklessness — the kind that’s as likely to involve leaping into bed as into a terrorist den.

So what is it about the achingly chaste landscape of Middle Earth that draws in so many modern readers and viewers? Paradoxically, I think it might be a case of sex exhaustion. We’ve become so jaded by the endless couplings thrust at us by every novel, film, TV show and music video that it’s the absence of eros that becomes — momentarily, anyway, and in this idiosyncratic context — titillating.

And yet, J.R.R. Tolkien, for all his identification with the Anglo-Saxons, was a 20th century man. He lived in a world which had already seen both Freud and the Weimar Republic, and he was an Oxford don, no stranger to the intellectual and philosophical currents of his time. And like any man or woman in the modern era, he was defined by them, too — even if the definition in question involved denying them. Eros, therefore, isn’t absent from Middle Earth; it’s deliberately suppressed. And as all amateur psychoanalysts know, when you try to suppress something, it shows up somewhere else — like a suitcase you’ve packed too full that spills out the sides when you try to close it.

So where is Eros lurking in "The Hobbit" and "The Lord of the Rings"? In plain sight, baby. Tolkien may have thought he’d squeezed it out of every conceivable corner, but it came popping out the bottom of the hobbits' pants legs.

It’s those feet, man. They’re easier to overlook when you’re reading the novels, but onscreen, they’re constantly in your face. They’re naked and they’re enormous and they’re hairy. It’s like Tolkien’s efforts to quash all sexual imagery were so relentless that the resultant, inadvertent eruption took the most flagrant, aggressive, and homoerotic form imaginable.

Freud himself argued that the foot is a penis substitute, and foot fetishism is probably the most common of all the various sex kinks. (I’m not particularly prone to it myself, but there’s a flash of Viggo Mortensen’s naked feet in one of the "Rings" films, and the image, so unexpected, knocked me flat.) So the presence of the titanically barefoot hobbits is just a leeetle bit disconcerting — especially since, from the ankles up, they’re made to seem prepubescent, even childlike.

Tolkien’s work strives for archaic effect, but there are a few things that make it explicitly modern, a work unimaginable in the centuries it strives to evoke. One, of course, is the monolithic evil of Mordor, the depiction of which draws so much on the soulless, industrialized factory states of Nazi Germany and the U.S.S.R. But there’s also those hobbits: gentle, genial, rustic little folk with mops of curly hair and little velvet jackets whose great phallic feet keep kicking through the scrim of story to remind us of our indomitable, irrepressible animality.

The Anglo-Saxons would have keeled over dead.