Now's the time to fix the filibuster

The stars are aligning for filibuster reform and changing the Senate's stupidest rules. Let's not mess it up 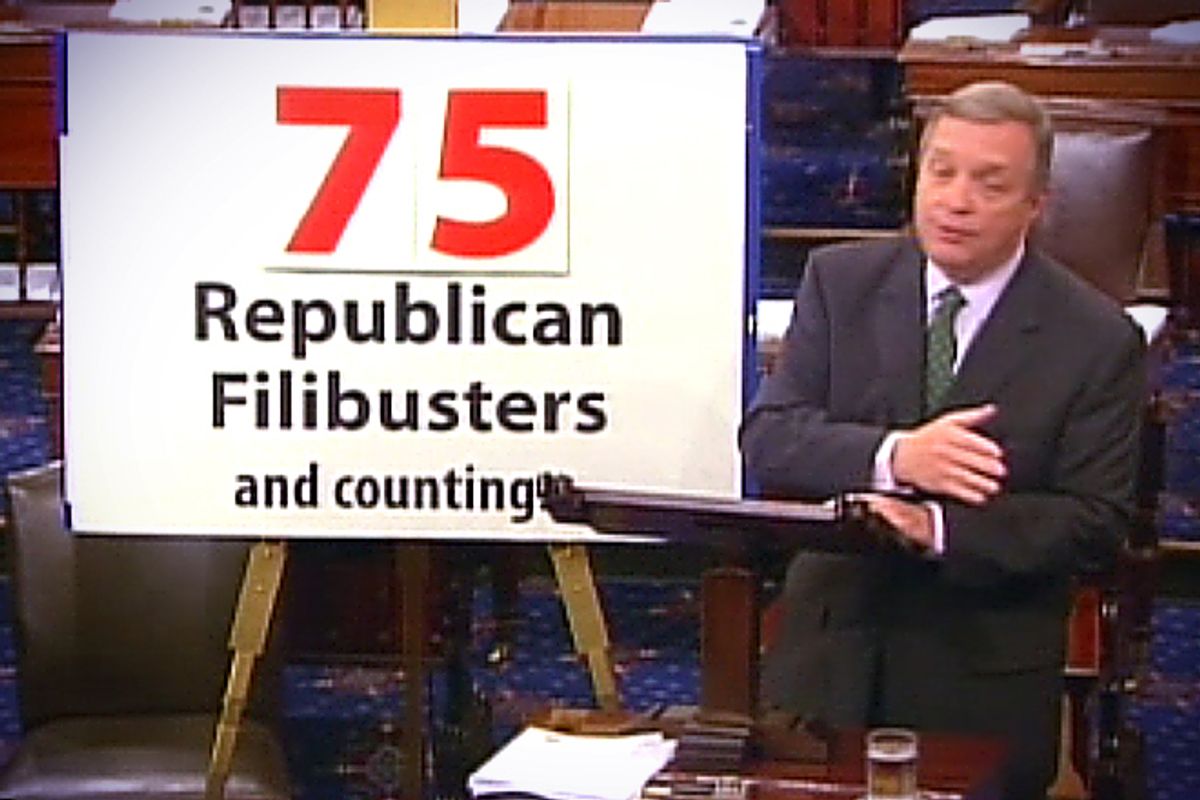 The momentum for filibuster reform in the Senate is real, and there’s a very good chance that something will happen when the body convenes at the beginning of January. Reformers believe that the beginning of a congress gives them a unique opportunity to change the rules surrounding the filibuster with a simple majority vote, instead of the 60-vote supermajority required by literal Senate rules. I disagree with that to some extent: I think that in fact a dedicated majority can find ways to change the rules at any point. But I agree change on Opening Day for the Senate is at least more in keeping with traditions and norms, and so I think it makes sense for them to move ahead now.

The problem, very simply, is that filibusters have exploded in the Senate. It was once a rare procedure used to block legislation only in cases where the minority was intensely opposed. But then, in 1993, minority Republicans started using it against every major initiative President Bill Clinton proposed; and by 2009 Republicans were deploying it all the time. What that’s created is a true 60-vote Senate -- because a supermajority of 60 votes is needed to defeat a filibuster -- on every bill and every nomination. Combine procedural moves to require 60 votes with often-unanimous opposition by the minority party, and the Senate has become deeply dysfunctional. At this point, even most supporters of the filibuster believe some reform is needed.

It’s clear that, like it (as I do) or not (and many liberal reformers do not), the Senate will be modifying, not eliminating, the filibuster. There aren’t going to be the votes for the Senate to move from a 60-vote chamber to a body that, like the House, is ruled by the majority party, period. Few senators want that, so it isn’t going to happen

The trick, then, is finding a reform that falls somewhere between those two options.

And it’s important to get it right. The stars may not align again for reform for years; the Senate should be careful, and make sure that whatever it does will actually work. How can anyone know? Well, the first step would have to be for the proposal to at least make sense. I’m going to propose three tests that any serious proposal should meet:

1. Reform should treat legislation, executive branch nominations and judicial nominations separately. The Senate does all three of those things, but there’s no real reason to believe they all need the same procedures. Especially since we’re talking here about reforming, not eliminating, the filibuster, it’s critical that people think through the case for reform in each of these cases.

2. Please, please, please: Forget about Jimmy Stewart. The urgent question is whether a supermajority should be needed to get things done. What’s wrong isn’t that a silent minority can block things; it’s that any minority can block anything it wants. There’s simply no reason to believe that “live” talking filibusters -- senators preventing a vote by speechifying endlessly on the floor --  have anything to do with it. Nor should they. It’s just a distraction from the real issues involved.

3. And a very practical consideration. We’re not playing games here. I’ve seen a number of convoluted schemes that, upon further inspection, do one of two things: Either they basically eliminate the filibuster by giving majorities a path around it, or they establish a lot of easily overcome obstacles that look nice but really leave the 60-vote Senate in place. Neither option is acceptable. Reform opponents aren’t going to be fooled by the former, and there’s really no point in passing the latter. (And yes, see above; forcing a minority party to talk isn’t going to get them to abandon a fight. Members of minority parties believe that their positions are good ones!)

I’ve set out my arguments for what I’d like to see elsewhere (in short, and omitting the details: Simple majority for executive branch nominations; retain supermajorities for judicial branch nominations but with an assurance of a rapid vote; and a souped-up reconciliation bill to give the majority party one clean shot a year for legislation). But whatever one’s proposal -- and it can be as simple as reducing the number of votes required to break a filibuster  -- it should conform to these guidelines or be rapidly dismissed.

Institutional reform in politics is a serious business. Rules matter. If Senate rules had been slightly different, we might have seen very different outcomes in the historic 111th Congress in 2009-2010 on healthcare, on climate, on the Recovery Act, and on several other issues. So when there’s a rare window to act, it’s important to get it right. The Senate, and outside reforms eager to see action, have only a few weeks before the new Congress convenes -- which means the time to get going on this is right now.