Republicans counted on tried-and-true class warfare like never before. This time, "outsiders" were the majority 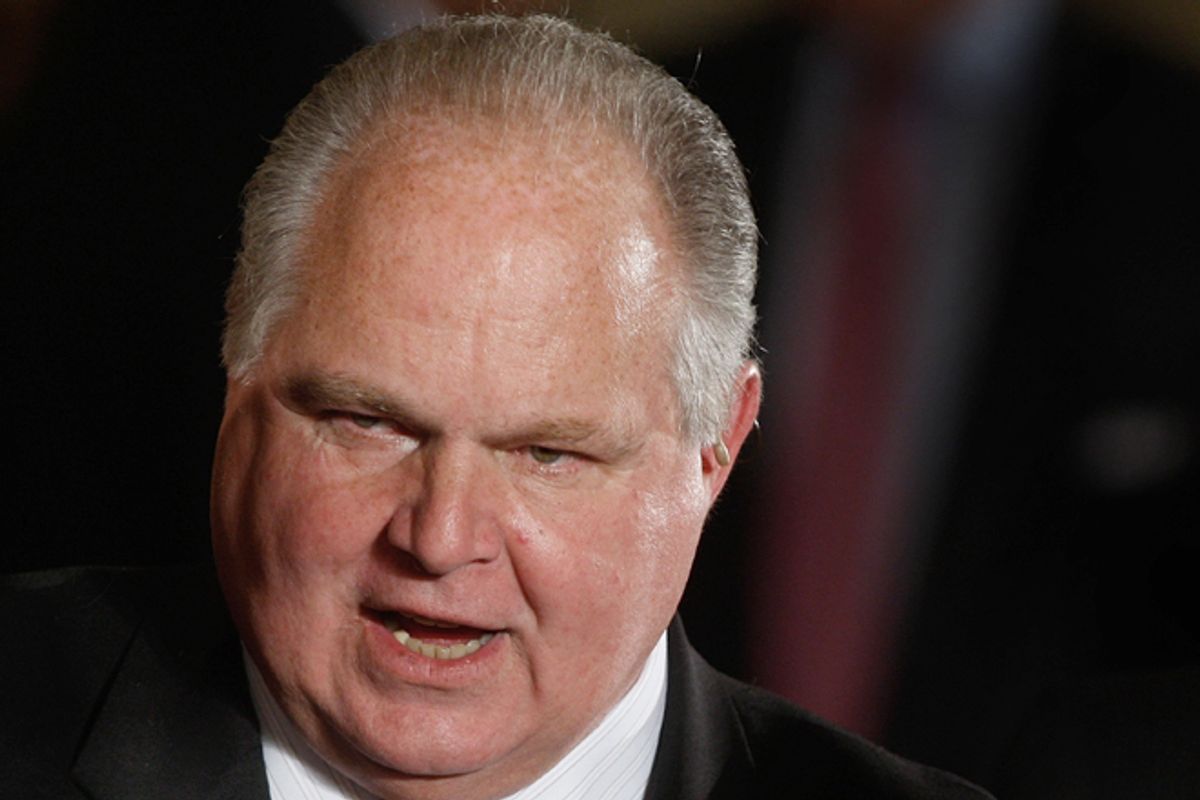 Before we get to the persistence of class warfare in our politics, let’s talk about Skinch Painter. In 1900, when the San Francisco Examiner tracked him down, he was 78, “hale, hearty, and contented.” He hadn’t inherited a penny, but neither had he worked a day in his life. “He has never borrowed a dollar, nor stolen one,” the column read. “He has never been a tramp nor a beggar. He has never done a day’s work in exchange for money ... Yet he has lived.”

One day, when he was in his teens, he said to himself, “Look here, Skinch Painter, this old world owes you a living, and all you’ve got to do is collect it.” Wandering the Ozarks of Missouri, he inhabited a cave and relied on nature for his food and clothing. He hunted, fished and gathered nuts and berries, wearing only animal skins and going barefoot.

“Labor is a useless sin,” said Skinch. “The time a man spends working is just so much time lost from living.”

We can just about see Fox News sending a camera crew out to interview Skinch, and one of its handsomely paid straight men wrapping up the piece with an offhand, “See, you don’t need government handouts. If you don’t want to work, you can do what this guy does. At least he’s not a taker. The rest of us in this country, we’ll continue to work for a living.”

Today, with the election well past, a late remark from Mitt Romney was revealed. According to the New York Times, he said (bitterly, one can only suppose) that he and Paul Ryan lost because of “gifts” generously bestowed by President Obama on blacks, Latinos and young people, especially women. They’re the new “privileged” class if you’re a Republican (and only if you’re a Republican). Republican state legislators are overheard saying that the right side would have won if only the urban vote had been suppressed through a strong voter ID law -- an outcome averted because individual judges had stepped in to block it from happening. And somehow voter suppression would have been OK.

Even before the 2012 campaign began, Fox News and Republican tele-pundits were charging Democrats with the crime of class warfare. In truth, though, Republicans were always the ones playing the class card -- and they’ve ramped it up since Nov. 6. With Romney’s defeat, the Republican media machine has decided to blame the voters. Ann Coulter was the first to pronounce, “Game over,” because the new electoral majority now contains “more takers than makers.” Bill O’Reilly upped the collective whine with his post-game analysis: President Obama won by appealing to all those people who “want things.” And then he clarified: “People feel they are entitled to things.” Things? Doesn’t he mean rights? Doesn’t he mean government protections? Isn’t he complaining because the non-rich people in our republic expect to be treated with a basic level of human decency?

The flip side of an obviously stupid argument is the complainers’ crude inference that only Republicans don’t want “things.” Oh, so they’re driven by altruism, are they? Class-based anger started, not with the Dems, but with the Tea Party, in 2009, when it sought to explain the collapse of the housing market by dismissing the unworthy Americans who never deserved to be homeowners. Tea Partyers had no intention of paying for others’ failure. Speaker John Boehner was on-board with this principle, because his was the party of self-reliance. So instead of directing their venom against Fanny Mae and Freddie Mac, they went after the Americans who had dared to buy a home beyond their means. There was a certain logic to this argument, but not to the underlying sentiment: They were mocking the idea of social mobility.

The Tea Party went after healthcare reform next, dismissing the uninsured as deadbeats. Romney rejected the government bailout of the auto industry on similar grounds: let the chips fall where they may. While corporations are people, my friend, when it comes to campaign donations, the people whose livelihoods depend on GM, Chrysler and Ford are expendable. At least that’s how it is in Romneyville.

Again and again, Republicans drew upon the same rhetoric, saying that the country was divided between independent Americans and worthless dependents. Dependent Americans needed big government, and the wealthiest Americans deserved tax breaks. Why? Because they were the wealth creators; they were valuable Americans; they had earned the privilege of lower taxes. For Tea Party Republicans, increasing taxes on the rich was nothing but a massive transfer of wealth from the deserving to the undeserving.

The “two Americas” that Republicans bought into was reinforced by a second line of attack. There were legitimate Americans (white and native-born) and there were outsiders, who were to be feared. They were “strangers” (immigrants); heathens (secret Muslims, secularists, gays); and wastrels (debtors, the unemployed, and the professional beggars who scammed the government into giving them “things”). These groups, representing, oh, say 47 percent of the population, demanded government intervention and rights and privileges they shouldn’t have – they somehow threatened a long-established social order. For the Tea Party, it was a zero sum game: recognizing the rights of strangers, heathens and wastrels somehow diminished the American “makers.” To put it in the words of former Texas congressman Dick Armey, chairman of FreedomWorks, Republicans alone “understand the miracle of America.”

Their compassion-free argument is not only not new, it’s not exactly American. It can be traced to an earlier British idea of vagrants, the wandering poor and worthless people who cannibalized the English economy at the time America was still a loose collection of colonies. The able-bodied poor who, in the English imagination, refused to work, the beggars who pretended to be disabled, were an early version of those whom Newt Gingrich infamously targeted when he proposed putting poor black children to work cleaning their own schools in order to learn discipline and earn their way into the workforce at an early age. For Republicans, only the “makers” sign on to the social contract. Only children with parents who are self-sufficient and self-reliant deserve good schools.

Single women don’t belong in the Republicans’ shrinking tent either. To serial husband Rush Limbaugh they are the vaginas, lusty doxies and virtual whores who want birth control so they can tramp around and avoid the consequences of pregnancy. Single women are not doing their job: reproducing the next generation of Americans. An “ad” appeared in New England newspapers during Thomas Jefferson’s presidency – it was “A Coquette’s Account of Herself,” trumpeting her “wholesome flesh,” her independent qualities, as she went languidly about searching for a husband: “I have a natural taste for extravagance and pleasure and am passionately fond of running into debt. I am, in a strict sense of the word, a bewitching girl, and very happily calculated to break a husband’s heart.” It’s the sort of joke only a Republican in 2012 would find funny. Because their level of respect for women and sensitivity on issues of gender inequality is pretty much in line with the mind-set of the white male citizens of 200 years ago. Beggars as takers, single women as takers.

The facts tell a different story. They prove that the real takers are the “red states,” all those states that are subsidized by the wealthier blue states. While the Tea Party folk insist they made it on their own, they at least have a Rick Santorum standing up for them. His father became a doctor because of the G.I. Bill, and worked in a veterans hospital. Rick Santorum went to Penn State University, a state-funded institution. His subsequent career in Congress was funded by taxpayers, and after his defeat at the polls, he was funded by think tanks and private backers. In sum, Santorum never earned an honest dollar, he never “made” anything. What exactly did he do “on his own”? A bit less than Skinch Painter, if you don’t count his procreative activity.

It seems that for the Republicans, “makers” are those who make money, and the real makers, such as autoworkers, are prospective takers. “Small business” includes corporations in Republican doublespeak, in which faceless entities are essentially the same as a mom and pop shop on Main Street (which is what Democrats think of when they aim to promote small business). The featured speakers at the Republican Convention embody the Republican mythos: Ann Romney, Chris Christie and the rest were all the proud inheritors of the gift of social mobility. They didn’t earn it. Their parents did.

Donald Trump’s inane campaign against the president was fueled by the same twisted logic. His Obama had been handed a free ride to Harvard. He didn’t earn his grades -– they were granted, and he was given a pass, because of his race. In fact, though, the undeserving students are legacies like Trump, who get into colleges on their parents’ coattails.

Republicans of 2012 kept shouting that America had been stolen from them, stolen from true Americans. They imagine that America is being invaded by strangers crossing our borders, abetted by a secret Muslim Manchurian president, and hordes of beggars running to government for “stuff” that the overtaxed Republicans will have to pay for. For how much longer will they be sticking to this illogic?

In spite of his father’s dreams for him, Mitt Romney was the mouthpiece of the Tea Party coalition. He was the friend of Trump and the servant of Limbaugh. He was a commodity purchased by Sheldon Adelson, who hated him until the superior hate-monger Newt Gingrich imploded. This is the biggest irony of all. Romney himself is not and never was his own man. As a politician, he is not a symbol of self-reliance. He’s the opposite.

Here’s what the election proved: You can’t win by hating a large portion of the electorate. Those accused of being beggars and dependents actually have a voice. And ears and eyes. They could not ignore the insults and slurs delivered by each and every Republican primary contender. A majority now believes that the richest Americans should pay their fair share of taxes, because the super-rich are the real takers. Romney’s refusal to disclose more than a sliver of his tax returns was indicative of his party’s problem. The Republican candidate was a private businessman who exhibited zero interest in putting the public good before private interest, no matter how much money he was making.

As a political chameleon, Romney was so constituted that he could never represent himself as a man of the people, and not only because voters were unable to detect what policies he represented. His party didn’t even want him to be a “man of the people.” He was, at best, a pugilist -- as he showed in the first head-to-head debate. He was on that night -- and ever since he won the nomination, in fact -- the last of the “Great White Hopes,” in a line that extended back to heavyweight champ James Jeffries.

It was the fight of the century all over again. Romney would beat Obama in the ring and keep the hordes of beggars at bay. Millions rooting for him refused to imagine any other outcome. Guess what, folks, when the black boxer Jack Johnson beat Jeffries on July 4, 1910, civilization did not end. The world will go on now, too, because the gloom-and-doom commentators at Fox are wrong. White Americans will not become irrelevant, even if a certain breed of angry white man loses his monopoly on political succession. It’s beyond demographics. It’s democracy.

Skinch Painter didn’t vote because it was too onerous a responsibility. But in all likelihood he would have gone with the Republicans in 2012.