Now that the joy of election night has subsided, it's time for a reality check: The president's still a centrist 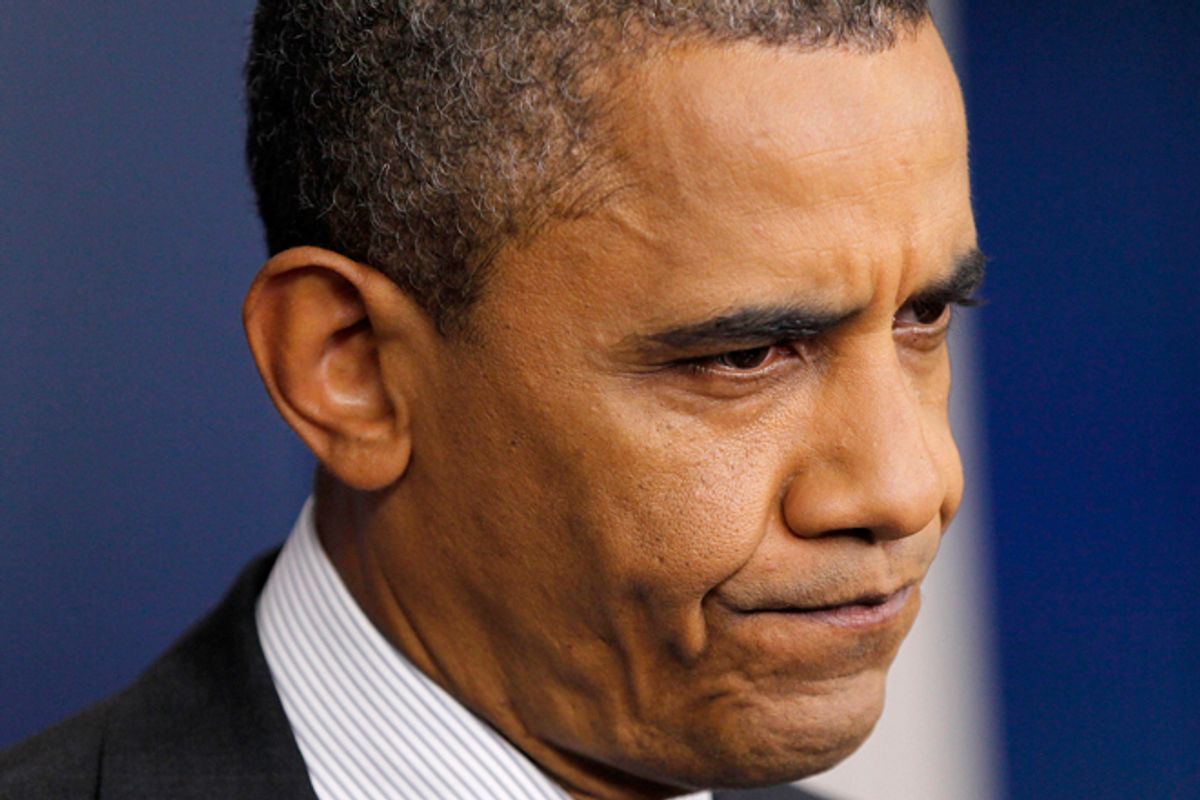 Terrorized by the prospect of a complete takeover of the U.S. government by right-wing reactionaries—progressive Democrats swallowed their unhappiness with Barack Obama throughout the campaign. They gamely defended his policies on the economy, health care, budget priorities and other issues on which they felt betrayed in his first term.

We’ve now dodged the bullet of a Mitt Romney White House, so let’s get back to reality. Despite his campaign-trail populism, the president will continue the politics of accommodation to conservatives. Two of the three priorities he has set out for his next term are at the top of the GOP agenda: a “grand bargain” to cut government spending over the next 10 years and corporate tax reform that would cut rates—don’t hold your breath—and close loopholes. The third priority, rationalizing immigration law, is one of the few progressive ideas that also has the support of the Chamber of Commerce and the Business Roundtable.

Moreover, his next term’s policy advisers will be the same—or come from the same Washington/Wall Street executive personnel pool—as his last term’s advisers. Indeed, from the White House perspective, the election vindicated their first-term performance.

The core organizations of the Democratic base have vowed that after the election they will hold Obama’s “feet to the fire” with a Tea Party-style mobilization from the left—forcing votes on progressive proposals, organizing mass rallies and grooming their own candidates for the next congressional elections. They’ve sworn these oaths before, but after each election, they persuade themselves to give the leadership another chance. Soon the next election is upon them, and they line up for their marching orders.

If this time is to be different, progressive Democrats must start mobilizing their own agenda now. And the first step is to face the truth about the record of the president we have just re-elected. Here’s an initial reality check:

Three years into the recovery, we have an official unemployment rate of just under 8 percent and an underemployment rate of almost 15 percent. Incomes are declining and at least 12 million homeowners have mortgages that exceed the value of their houses. Consumers aren’t spending and therefore business is not investing. And we are still running a huge trade deficit with a sluggish global economy. This leaves government as the only possible source of substantial new spending to create jobs.

Yet there is no jobs program. President Obama says his top priority is a deal with House Republicans to reduce the deficit by $4 trillion over the next 10 years. His “liberal” position starts with a ratio of spending cuts to tax increases of 2.5-to-1. The only real dispute between the president and Republicans is whether the rich will have to give back the tax breaks George W. Bush gave them. So when the eventual deal is struck, the federal government will be taking more out of the economy over the next decade than it is putting in. This virtually guarantees that—even if we escape another recession or financial meltdown—we will not reach anywhere near full employment in the next four years.

With no new substantial source of stimulus, our trajectory is toward a further erosion of living standards for the majority of Americans. Off-shoring and automation will continue to shed jobs with no offsetting increase in the demand for labor. Budget cuts—including cuts to Medicare and Medicaid—will widen the holes in the social safety net and further limit investments in education, infrastructure and technology upon which any chance at future prosperity depends. And the White House’s indifference to the dramatic erosion of organized labor (e.g., its reneging on promises to reduce the barriers to organizing) will continue to undercut the bargaining power of all workers—union and non-union alike.

The president’s Council of Economic Advisers will not admit it, but their default strategy for growth is to let American wages drop far enough to undercut foreign competition. That is the only possible policy rationale for Obama’s enthusiasm for the Trans Pacific Partnership, a further deregulation of trade that will strip away the last protections for American workers against a brutal global marketplace of dog-eat-dog.

The Patient Protection and Affordable Care Act was a victory for corporate America. In exchange for giving up their rules against covering pre-existing conditions and agreeing to raise the age limit in which children could be covered under their parents’ policy, the health insurance corporations got the federal government to require every citizen to buy their product and commit to subsidizing those that can’t afford the price. The pharmaceutical industry received even stronger government protection of their price-gouging monopolies. The Congressional Budget Office estimates that there will still be 30 million uninsured Americans by the end of the decade. Tens of millions more will be under-insured as the companies are free to raise their premiums and deductibles.

Although it abandoned the public option, the White House whispers to Democrats that Obamacare will pave the way for single-payer. Fat chance. The bill was inspired by the right-wing Heritage Foundation and largely drafted by a former insurance company executive precisely to stop single-payer from ever happening. Meanwhile, the corporate dominated health care system will continue to be a huge drag on our global competitiveness and long-term fiscal health.

The Wall Street Reform Act required more transparency in the securities markets and marginally expanded the regulatory bureaucracy. But it did little to prevent a future return to the reckless speculation that exploded the economy four years ago. The largest companies now have a bigger share of the financial markets than they had in 2008 and their “too-big-to-fail safety net” is even more explicit.

Perhaps most important, nothing has been done to lengthen the horizons of U.S. investors from short-term, get-rich-quick financial speculation to the long-term investment in producing things and high-value services in America.

5. Big Money and the Democrats

The last four years have proven conclusively that corporations—especially from Wall Street—now dominate the most important economic policy decisions of the Democratic Party. With the Supreme Court decision on Citizens United, the transformation from democracy to plutocracy is virtually complete. The corruption of our governing class goes beyond just campaign contributions. It can include the hint of a future job or lobbyist contract when you leave office, a hedge fund internship for your daughter, a stock market tip. But all this depends on your remaining in power, so nothing matches the importance of raising enough money to get yourself reelected.

Democratic leaders’ primary response to Citizens United has been a tepid proposal to require more transparency in campaign contributions. Even that, of course, could not succeed against Republican, and some Democratic, opposition. But even areas where the president could act alone—as with an executive order requiring government contractors to disclose political contributions or even filling vacant seats on the Federal Election Commission—Obama took a pass. In response to an interviewer’s question in August, he said that “in the longer term” we may need a constitutional amendment to undo Citizens United. He is right. But the “longer term” certainly means sometime after he leaves office.

According to the White House, discontent on the left with these and other issues (e.g., climate change, civil liberties, military spending) represents little more than the carping of left-wing purists who don’t understand the need for compromise. But in fact, it reflects the harsh reality that the president’s intentions do not nearly reach to the level of the country’s serious problems. So the stakes for the nation are enormous. Without a radical shift away from the policies of the last four years, living standards of most people in the United States will continue to drop, with potentially ugly social and political consequences.

The stakes for Democrats are also high. Obama’s victory has reinforced the widespread notion among pundits that the projected future increase in the non-white voting population and the party’s advantage with women already makes it the favorite for 2016 and beyond. But it is precisely these constituencies that economic stagnation has hit the hardest. Whatever the demographic changes, if the Democratic Party produces another four years like the last four, it can kiss goodbye to the next election and probably several after that.