American Music Awards: All Bieber, all the time

Fans anointed Justin Bieber as the reigning Prince of Pop, bestowing him with three awards 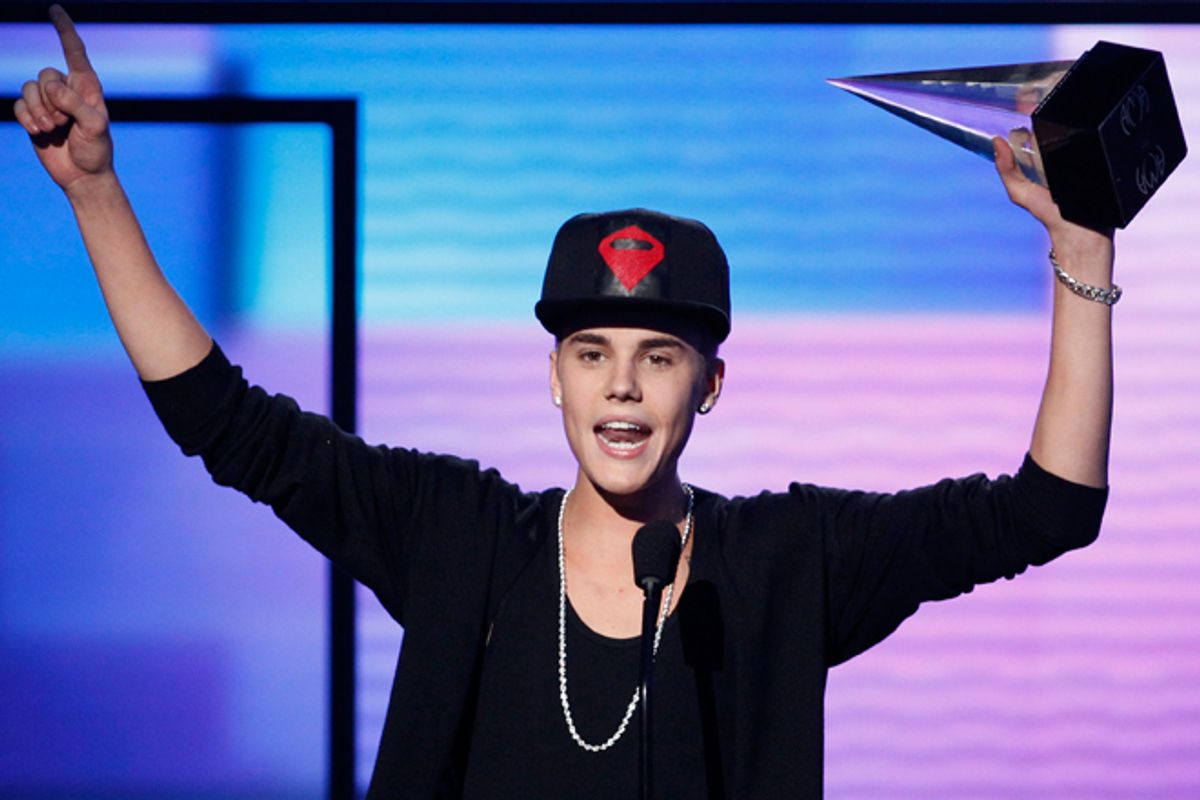 If audiences learned one thing from last night’s American Music Awards, it is that a Samsung Galaxy phone can also double as an envelope. Oh, and that Justin Bieber is still the reigning prince of pop.

This is not particularly surprising or new, but Bieber’s total domination of the night was, beating out the likes of Maroon 5, Katy Perry and Rihanna for Favorite Pop/Rock Album, Favorite Pop/Rock and Male Artist and Artist of the Year. On stage, he spoke less like an established pop star, and more like a kid who still has something to prove: “This is for all the haters who thought that I was just here for one or two years,” he said. “I feel like I’m going to be here for a long time.” Bieber threw a shout-out to his mom, Pattie Mallette, who was also his date for the evening, “I want to thank my mom. She’s right here, she’s amazing, she’s beautiful.” Finally, he remembered to thank the fans, “I love you, too, I love everybody, I love you” (except, presumably, the haterz).

When Bieber won the first award of the night, it set the tone for an evening of predictability: Oh, so this is how it’s going to be?

But there are no judges to blame for this. For the sixth straight year, American Music Award recipients were elected by voters; it makes sense that the singers with the widest, most vocal fan bases would also be the ones honored last night. Bieber and Nicki Minaj collectively took away five awards, and Katy Perry, Rihanna and Taylor Swift, all among the top 10 most followed people on Twitter (Minaj is number 11), won as well.

And this is the purpose of the AMAs. Originally started by Dick Clark in 1973, the ceremony is meant to honor the most exciting music in popular culture and “to put audiences in touch with the latest phenomena.” It was a pop spectacular, star-studded and flashy and ornamental, like the heavily manufactured music it generally promotes.

But there were few, if any, “phenomena” at the 40th anniversary event. At one point, Ke$ha’s makeup performed as her body writhed around the floor in a leotard. At another, Christina Aguilera led a circus, creating a very awkward “elephant in the room” type of situation for everyone in the audience (and at home). Carly Rae Jepsen emerged from pastel-colored phone booths to sing an uninspired rendition of "Call Me Maybe." Compounded by the multiple stylings and colors of Nicki Minaj’s hair, it was enough to make even a 20-something feel old (highlight for most '90s kids was the tribute to Will Smith and Jazzy Jeff).

But many 20- and 30-somethings (well, at least a few) would agree that it was nice to see EDM (which Elisha Cuthbert kindly explained, stands for “Electronic Dance Music”) recognized as a genre of popular music/credible noise, with Skrillex, Calvin Harris and David Guetta as top contenders. After thanking his fans, Guetta, who won the category, appropriately sneered at the rest of us Americans, saying that he’s glad that EDM “is finally recognized in the U.S.” (Guetta was unable to accept the award in person because he was off playing EDM in a country where it has probably been recognized much longer — Brazil.)

While recognition of EDM marked a formal evolution in popular American music taste, nothing showed the international community's influence on American tastes more than the grand finale: a live performance of “Gangnam Style" with a touch of Hammer time. PSY performed the viral K-pop hit, lifting the star-studded audience to its feet with his popular horse-dance. Hammer then busted out with the early '90s classic, "Too Legit to Quit." "Modern Family’s” Eric Stonestreet, who was the audience's barometer for the entire night looked at first confused by this, then generally pleased (but still mostly confused).

And that's what the night was: predictable, but confusing. Stevie Wonder did his best to rein us in, paying tribute to Dick Clark. "I remember his friendship and his kindness. I remember his love for music and his love for people," said Wonder. "I challenge you, you as communicators, leaders, politicians, spiritual leaders: Put your love first like we musicians put our music first … Then we can be jamming until the break of dawn."