New York's governor might lead his party in 2016. So why won't he fight for a state Senate majority they earned? 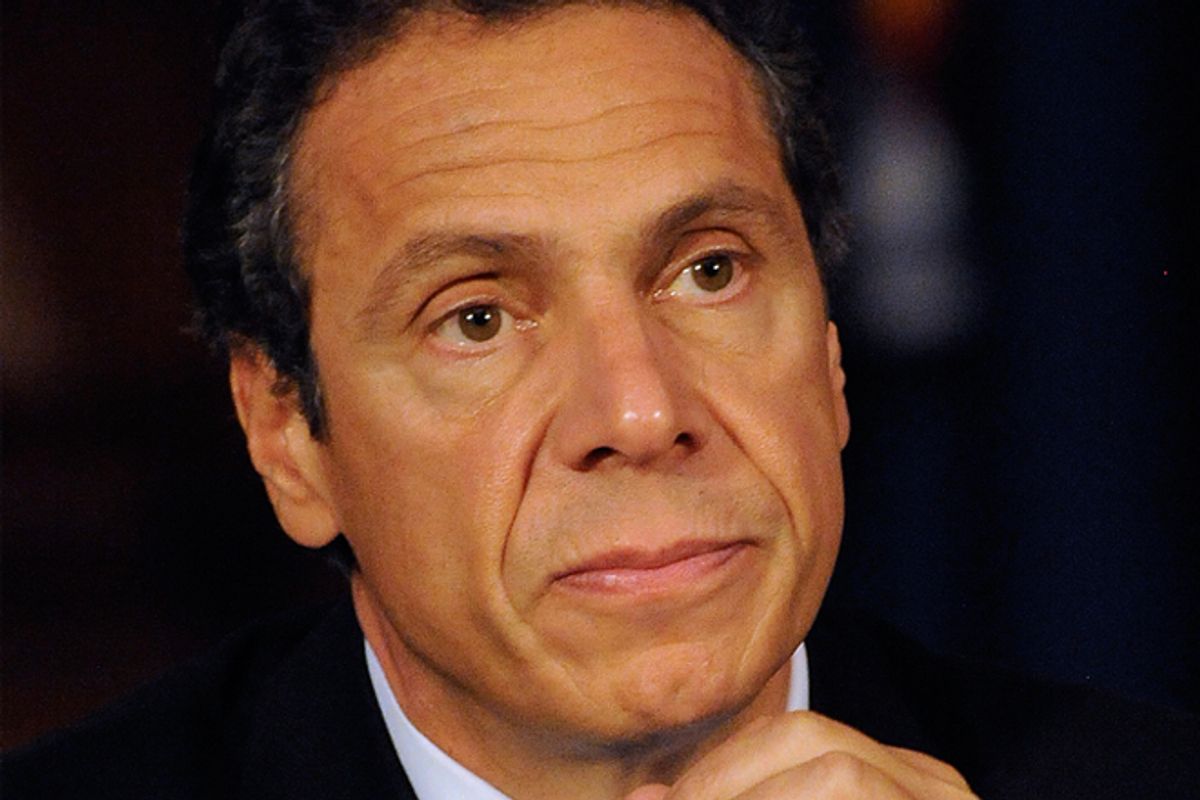 If the New York state Senate remains controlled by the Republican Party, it won't be because of the voters. Democrats have 30 seats, with 32 required for a majority. They're also ahead in two races currently being recounted. Simcha Felder, who won a Senate seat on the Democratic and Conservative Party lines in Brooklyn, has already announced that he will caucus with the Republicans. If the Democrats end up with a majority, there is a good chance a bunch of conservative Democrats will switch parties to ensure that the GOP retains control. One guy who's staying conspicuously out of the fight: Democratic governor and 2016 presidential contender Andrew Cuomo.

"The Assembly will pick a leader, and the Senate will pick a leader. And I have no intention of getting involved in either situation," Cuomo said at a press conference last week, while underscoring that he thought Democrats learned a lesson the last time they were in control of the Senate. "I think they learned the hard way. The Democrats were in power. The Democrats then lost power because of the dysfunction and I think they learned that lesson the hard way."

But it's not just that Cuomo's not trying to help his party win a majority that voters actually voted for. He has at times actively hindered their chances. Cuomo signed off on gerrymandered state Senate districts and did not demand independent, nonpartisan redrawing. In doing so he intended to preserve the status quo -- Republicans in charge of the state Senate, Democrats in charge of the more representative assembly -- but voters in New York pretty clearly decided that they preferred Democrats in charge of both houses, even with districts drawn specifically to make that nearly impossible.

And if Republicans get their majority, with the tacit support of Cuomo, the governor will have once again shown that he is not the progressive figure he will likely try to sell himself as if he runs for president. His tenure so far has been marked by flashy liberal victories on issues like gay marriage, along with a quietly conservative economic agenda: A property tax cap, total neglect of mass transit, and (partial) support for fracking. Even on economic issues where Cuomo has more liberal priorities, he rarely pushes his Republican friends particularly hard. (A Republican-controlled state Senate will almost certainly block a minimum wage increase Cuomo ostensibly supports.) There's a reason, in other words, that the National Review loves him.

Cuomo doesn't hide his conservative tendencies -- they're part of his sales pitch, especially upstate and outside New York City -- but he's in an enviable position of being able to run and govern as a conservative while retaining a progressive reputation, because he's, you know, a Cuomo and a big-city blue state liberal governor who got gay marriage passed. His response to Sandy has raised his national profile even more, and barring the sort of disastrous scandals that have sunk the last couple of New York governors, he'll keep being mentioned whenever people bring up 2016 candidates until the day he announces his intentions. But Democrats ought to know what sort of Democrat he is. If Cuomo allows Republicans to subvert the will of the voters of New York, so that he has an easier time cutting taxes and rolling back regulations, he shouldn't be allowed to sell himself to future primary voters as a progressive.