Lana Del Rey, the joke's on us

As the pop star lightens up and gains a sense of humor, it's time to take the savvy singer quite seriously 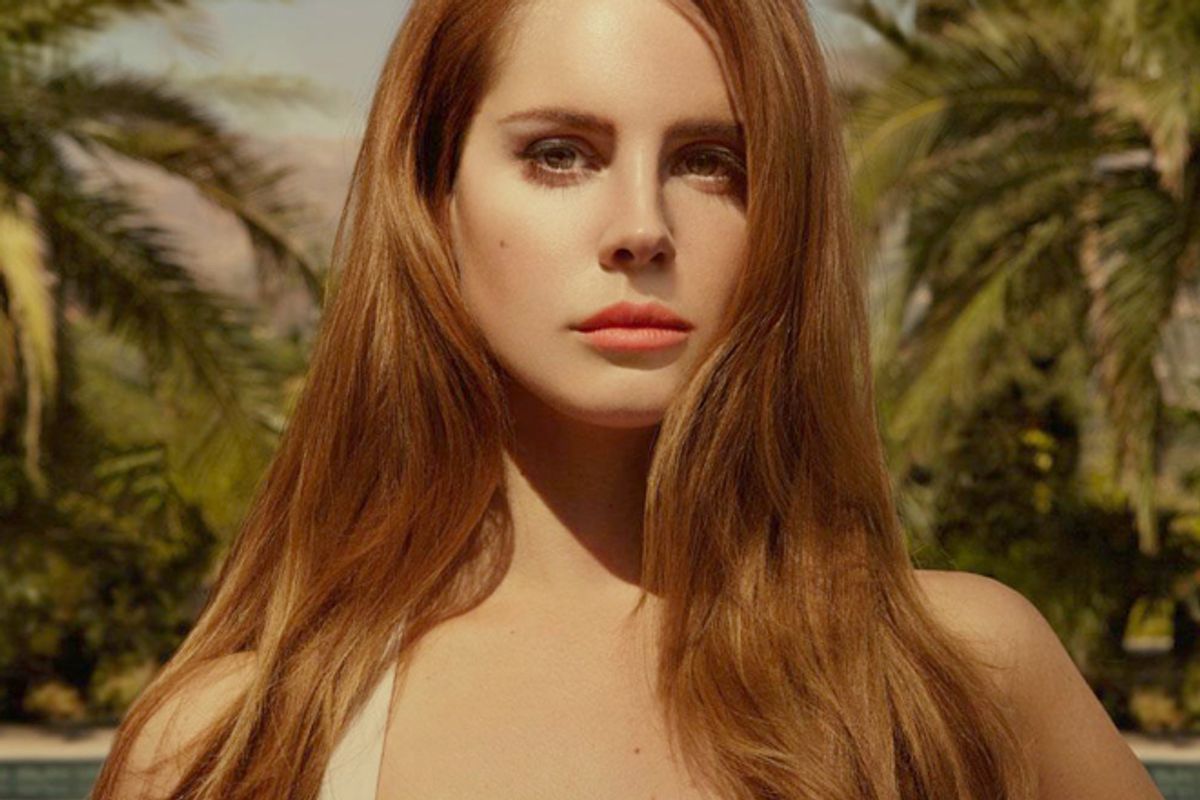 On the year’s most controversial album, "Born to Die," (released in a “Paradise Edition” last week), Lana Del Rey proclaims “My pussy tastes like Pepsi Cola.” It’s not enough for 2012’s most-talked-about pop star (did people really discuss Carly Rae Jepsen?) to enjoy corporate excess or bemoan it from a human distance; she has to physically bond with it. Why carry the designer bag when you can get the logo tattooed?

Whether you find Lana’s, ahem, product placement to be appalling or novel, chances are excellent that you paused to take it in, because it’s not the sort of thing that a pop star — or any kind of celebrity really — would say. It sounds like a funny detail from a satirical dystopian novel. If you read it on the page and remove it from the funereal, laughless tone imbued by the woman formerly known as Lizzy Grant, it could be an inside joke from a yearbook quote. Suddenly it’s not weird. It’s an icebreaker from someone who, if she did nothing else in 2012, learned to smile at herself.

Laughter is a crucial feature of any connective music, just in case there are still Scott Walker fans who can’t fathom why he toils in cultdom while Sinatra enjoys commemorative plates. That’s one reason Del Rey’s fearfully nervous "Saturday Night Live" performance in January failed. It might’ve been too high-profile a stage for a debut artist’s unseasoned chops, but mostly people just walked away from her performance paranoid that the failed singer still thought that she’s better than them. They weren’t nearly as insulted by Ashlee Simpson’s post-lip-sync jig. Maybe they linked her droll delivery with smugness. Maybe they consider her alleged plastic surgery to be cheating at something, somehow. And maybe those who didn’t get down with the album forgot that “Money is the reason we exist” is also the agenda of most acclaimed male rappers. Lana’s very funny, but she doesn’t laugh, really. This weirds people out.

The blankness of her affect has been made kind of a canvas for people to project their Lanafears, namely that she’s in on something they’re not. This could mean everything from the “self-released” label credit when Pitchfork awarded Best New Track to the breakout tune-with-viral-video “Video Games” — when Interscope, knowing these things, was still a silent partner — to the archetypal bad boy we can’t tell if she’s slagging or servicing. Spin magazine's Rob Harvilla wrote of "Born to Die": “It's instructive to picture what this guy would actually look like IRL, some clown with a real emotional haircut, Crocs hanging off his feet, Urban Outfitters leather jacket hung over his IKEA futon, remnants of that Taco Bell burrito with the Fritos in it congregating at the corners of his mouth as he binges on Skyrim, blasts "Pumped Up Kicks" on infinite repeat, and gargles dozens of shots of, like, Goldschläger.”

But it’s just as instructive to remember her pre-"Born to Die" single “Kinda Outta Luck” (“My daddy’s in the trunk of his brand new truck/ I really want him back but I’m kinda outta luck”). Her subservience is a creation, too — why hasn’t anyone suggested that the fed-up “Video Games” is a prequel to her dumping his body, Eminem style? It’s not just because she’s a woman, but when playing fast and loose with the auteur’s intent, we don’t seem to worry about undermining her the way a fearful new scribe might about a Radiohead lyric. Return to when she was Lizzy Grant and you’ll find “Put Me in a Movie,” with the invitation “You can be my daddy” but also the further push, or complete context changer, “come on, you know you like little girls.” YouTube it; freak yourself out. Maybe admit that there’s more to be revealed yet about the way she wields ambivalence. Or that her David Lynch obsession might have more legs than a passing Tumblr-like fancy.

"The Paradise Edition" is a souvenir from the insane whirlwind of hype and controversy that accompanied Del Rey’s last 18 months, with eight deleted scenes that don’t attack her critics, but subtly burrow into the idea that she’s “trolling” us. “Jesus is my bestest friend,” she sings on “Body Electric,” echoing that Sonseed meme a few years ago. In Lynch’s honor, she covers “Blue Velvet.” And “Gods and Monsters” nearly looks at the people watching her coveted silver screen in the eye.

“In the land of gods and monsters/ I was an angel looking to get fucked hard” is classic Lana because it’s a guffaw of a one-two juxtaposition and because, with close scrutiny, it cuts deeper than the trolling with which she’s unfortunately associated. Gods and monsters are both temperamental constructs to be feared because they kill; even if you find her guilty of self-sexism she’s certainly an “angel” compared to the Todd Akins and Rush Limbaughs who have sought power on the basis of shaming and destroying people who harbor dreams of getting fucked hard, not to mention people who don’t want to be killed or, for that matter, raped. The monsters in women’s lives are real. Lana doesn’t have a grand statement for them, but she’d mind them to butt out as well. The lyrics increasingly answer reality as the song progresses. “Like a groupie incognito posing as a real singer/ Life imitates art” uses herself as a metaphor, because why not, while “when you talk it’s like a movie and you’re making me crazy” could be applied to any abstract idea put into place to control women, from the implied slut-shaming to religion itself. The definitive stroke is “If I get a little prettier can I be your baby/ You tell me life isn’t that hard,” all the more devastating sung through lips that aren’t widely believed to be real. Nicki Minaj should be so cutting.

That’s the double standard for you. The idea that Lizzy Grant enjoys sex, much less submission, or the chaos caused by the character she’s created, isn’t examined much in the uniformly bad-to-middling reviews "Born to Die" received  in January. The party line was mostly exemplified in missives like this one from The Onion's AV Club: “The ensuing debates about Del Rey’s authenticity were overheated and dispiriting, riddled with gender prejudices and unfair jabs about the artist’s cosmetic overhaul. Unfortunately, "Born to Die" almost seems to go out of its way to vindicate even Del Rey’s smuggest detractors.”

Many people agree that she knows what she’s doing, even if the appeal is that she appears like she doesn’t. Few want to admit that the feeling that they’ve already been had, that Wikipedia’s supposed to safeguard from these kind of mistakes in the present, is what upsets them so much. Though more critics are considered “poptimists” than ever, as year-end wrap-ups will be featuring Miguel and Jessie Ware in droves, most tastemakers still prefer to classify something “pop” from the get-go and have trouble with changing focus when “personal” artists become “universal” ones (see Bright Eyes’ ascent from emo kid to MoveOn.org troubadour) or when aims become “calculated” (Rilo Kiley’s excellent "Under the Blacklight" was a disappointment for the half of its audience that couldn’t believe they’d have an honest affinity for Miami Sound Machine). With her record-quick bait-and-switch from unattainable indie mystery to smoking gun that took the No. 2 Billboard spot as a consolation prize, Lana exposed a security leak. For sure her cast-off evocations like “She laughs like God/ Her mind’s like a diamond” stimulate more thought than an overrated rapper like the Game, who lamented “video ho” conquests that don’t usually get to tell their side over a Kanye beat. It’s possible that people didn’t like the rest as much as “Video Games.” It’s also possible that Lana’s submissive anachronism isn’t a regression for pop, but an awakening for a generation of educated feminists who also have a Fetlife account and a thing for daddy doms.

The main push for "Paradise" is a Rick Rubin production called “Ride” that doubles down on Del Rey’s synthetic Americana fantasias the same way the Killers’ “When You Were Young” ushered in their own No We Really Aren’t Joking stage. The Killers got plenty of poking for lines like “Are we human? Or are we dancer?” but they never received the kind of dogpiling abuse that Lana did for name-checking Pabst Blue Ribbon on ice. For a 10-minute video, with the song in the middle, Del Rey recounts how she became the queen of a bike gang in nostalgia-dollop soft-focus, with a hedonistic shrug of a chorus: “I just ride.” But there’s a wink of brilliance in the voiceover, which uses her real-life infamy as a launchpad for her underdog story: “I was a singer. Not a very popular one. I once had dreams of becoming a beautiful poet. But upon an unfortunate series of events, saw those dreams dashed and divided like a million stars in the night sky that I wished on over and over again, sparkling and broken.”

Even those who hated the fact she made a song called “This Is What Makes Us Girls” can’t deny empathy when she sings, “I’m tired of feeling like I’m fucking crazy.” She explores the many facets of “crazy” almost as much as Best Coast, another indie-borne female who’s chided for pining too much for that man, praising a man who drives her (happily) crazy on “American” whom she invites to play house and listen to both Crystal Method and Springsteen. She’s more human than dancer.