I tried everything I could to get pregnant. Each new method was a challenge to my self-esteem, and also my marriage 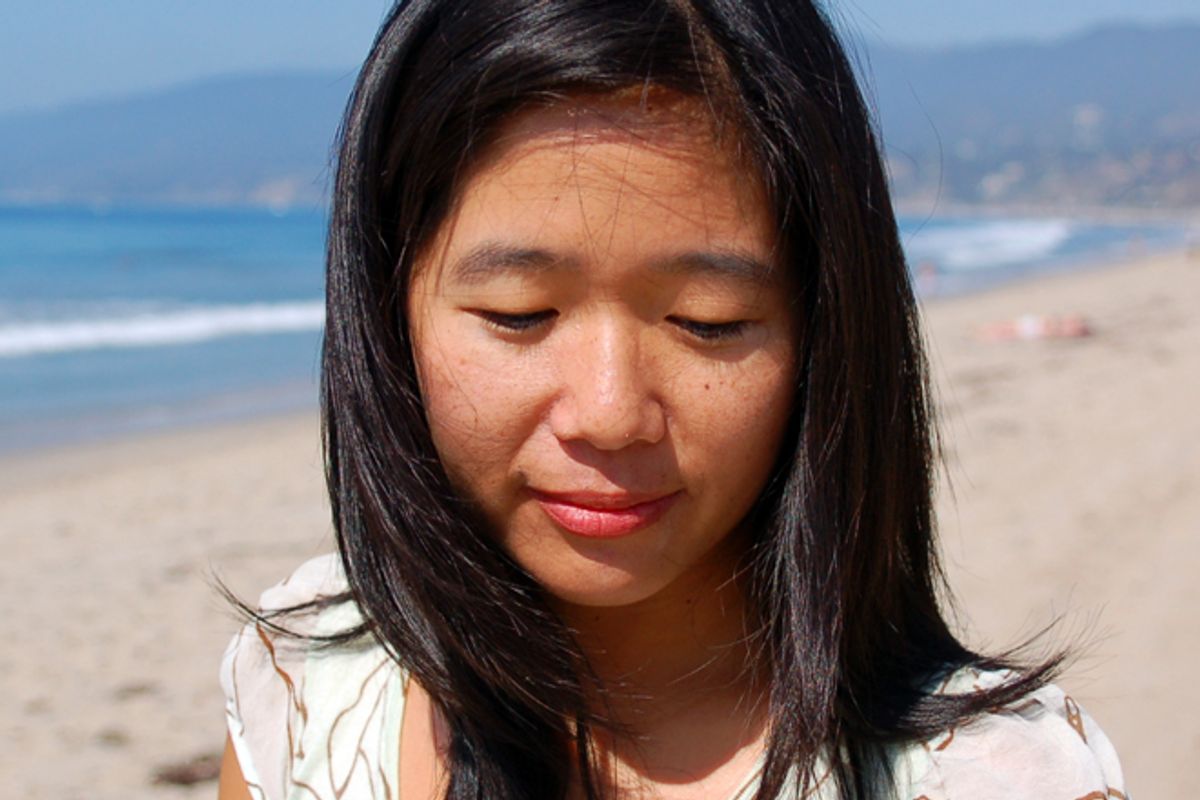 My husband flicked the syringe to remove the air bubbles. Aside from hipsters lounging at candlelit tables across the street, the sidewalks were clear. If we worked together, I could shoot up before anyone walked by. By the glow of the dome light, I pulled up my shirt, unbuttoned my pants and swiped an alcohol pad across my stomach while he prepared the injection.

I held my breath, and he plunged the needle in my belly, ringed with the bruises that marked his love for me. For an upcoming fertility treatment, I had to inject myself that evening, during the hours I attended a book reading in Los Feliz. By the time my husband and I left the reception -- where the two of us going into the house’s sole bathroom would have perplexed guests – it was too late to wait until we returned home.

We’d been trying to get pregnant for more than a year and a half, starting when I was 33 years old. The cause of our infertility remained a mystery, and I couldn’t help but feel my body had failed me, the athletic and dependable body that had carried me through a triathlon, a marathon, hikes in the Sierras and reporting trips in Asia and Latin America.

For months, I faithfully, blearily charted my basal temperature upon waking and tracked my ovulation by urinating on a tester, even while backpacking, crouched over a pit toilet. I stopped logging onto Facebook, after crumpling inside each time friends posted photos of their belly bump or their newborns. When a close friend called with news of her pregnancy, I congratulated her, trying to keep the quaver out of my voice. I had to hold it together because I didn’t want to spoil her joy, but as soon as I hung up, I burst into tears. My husband took his hand off the steering wheel and squeezed mine. “You were strong.”

I began taking fertility medications with side effects of nausea and bloating, which cruelly mimicked early signs of pregnancy, filling me with hope until I felt the familiar ache in my legs and my skin turned oily, signaling my period. Hours each day, I searched online, hoping to uncover secret cures. I tried acupuncture, and washed down mysterious little black Chinese herbal pills with a witch’s brew of foul teas.

I told no one, feeling ashamed, abnormal, betrayed by my body. For the most part, I’d also abstained from drinking alcohol during the two-week wait after ovulation and before it was time to take a pregnancy test. Maybe I shouldn’t drink at all, my husband said, to improve our chances. He promised not to drink, in solidarity, so I wouldn’t be tempted. I told him not to stop. Why should we both be denied?

I, not we. I shouldered most of the responsibility for the treatments. That was the reality of the female anatomy: my eggs, my uterus, my pregnancy.

Friends and family would ask if I’d like a glass of wine or a cocktail. Everyone but me, everyone including my husband, had a drink.

Just water, please, I’d say, feeling conspicuous. With a slice of a lemon.

“Wait!” they’d shout, narrowing their eyes, and ask if I were pregnant.

No, but we’re trying, I’d say, which led to more questions, including the most upsetting one: “For how long?” They’d reminisce how they or their friends easily conceived and would offer unsolicited, well-meaning advice: “Try yoga,” “Fall asleep afterward” or “Have a few drinks beforehand.”

To ward off questions, I’d claim to be abstaining after over-indulging, on antibiotics, or getting over a cold. Often they still suspected, and they asked about our progress. Among my friends, many had persisted in drinking up through their pregnancy test and in later trimesters, imbibing moderately with the blessing of their doctor. I also had friends who cut off consumption of alcohol, sushi, coffee, and soft cheeses while trying to conceive. Drinks or no drinks, they all had healthy babies.

While attempting to start our family, my husband and I had deferred trips and let go of plans and opportunities. I had understood my life and its attendant freedoms to drink, eat, do and go where I wanted would change as a mother, but I’d never considered the limbo in which the precautions would turn out to be pointless, month after month. Sometimes I drank, a glass or two, only at dinner, and only on the weekend. To pair with the meal, to relax and for a chance to feel as if my life hadn’t been put on hold for a future that might never come.

My husband wasn’t pleased. After I sipped half a glass, he took the drink from me and finished it. He’d shake his head, as if I were abusing our theoretical child. Sliding my drink away before I became too inebriated had been a flirtatious gesture he’d started while we were dating. I was a lightweight. One drink before dinner, on an empty stomach, would get me tipsy; several more and I might heave. His protectiveness had charmed me then, but now it felt controlling.

“What if” – he asked several times – “you were pregnant and miscarried because of your drinking?”

Although I’d wondered the same myself, I said – increasingly defensive – that I found no evidence suggesting a drink or two posed an unacceptable risk. Still, I felt guilty, and I resented him for policing me, for scolding me like a father whose daughter missed her curfew. In return, I reprimanded him in the tone of a frustrated mother disciplining her insubordinate son.

As we continued trying, the list of his suggested prohibitions widened. Perhaps I shouldn’t run or go swimming, my husband said, because exercise might threaten implantation. A concern I’d shared, along with many would-be mothers who posted similar questions online. After my doctor cleared it, I continued exercising, but less often, less vigorously and with fear. I felt like one of King Henry VIII’s six wives, confined to a locked room, reduced to a single purpose: to produce an heir. Like those unfortunate women, I alone would be blamed and beheaded.

When we underwent IUI – in which sperm is injected into the uterus – our clinic advised against exercise except for walking until the pregnancy test. I chafed against the half-month restriction and the denial of my runs, the wind and sunshine against my cheek. The moratorium against exercise, I discovered, wasn’t consistent at every clinic, and critics said it unnecessarily led women to blame themselves if the pregnancy didn’t take hold. Still, I resigned myself to power-walking grimly around the park listening to ‘80s dance hits.

After four rounds, I didn’t get pregnant, and the clinic’s – and my husband’s – advice seemed about as helpful as when my father told me not to go out after dark in New York when I interned at a magazine in college. An overly cautious rule, to be flouted.

Between treatments, I rebelled with runs and an occasional drink, and when my husband took my glass, what once had been playful now seemed paternal. Perhaps no surprise, because I’d married a man much like my father: thoughtful, meticulous and responsible.

While we were dating, my husband won over my father by mentioning that he’d read the manual that came with my new car. “I ask my wife, my children to read their car manuals, but only you do!” my father exclaimed.

But I wasn’t a teenager. I didn’t follow traditional Confucian precepts in which a virtuous woman must obey her father before marriage, obey her husband when married and obey her son in widowhood. My husband and I had to be united, not divided, to survive the trials of infertility.

“I feel so helpless,” he said, apologizing. “I know this is hard on you. That’s it’s all on you.”

We promised to do better. We had to do better. If we were fortunate enough to conceive, we’d make decisions together for years as parents, as equals. Eventually, we tried IVF, which we’d resisted because of the expense and because it seemed invasive and sci-fi spooky. Then the IVF pioneer won the Nobel Prize in medicine. Four million children had been conceived worldwide, thanks to the procedure, and maybe ours could too.

For many couples, undergoing IVF can be a heart-breaking, divisive process – the kind of stress that can break up a marriage – but that’s when we drew closer together. For weeks, my husband prepared my injections. I swabbed my belly for one shot. He iced my butt cheek for another kind and used a warm wet washcloth to massage in the dose. Before he left for a business trip, he coached me how to inject myself on my own.

Before the nurse wheeled me in for the egg-retrieval procedure, he waited with me, holding my hand. And he held my hand when I woke up from the anesthesia. Two weeks later, he drove me to the clinic for my pregnancy blood test, and a month later, he drove me to the first ultrasound, when we discovered we were having twins. We marveled over their gummy-bear profiles and listened to their galloping heartbeats. At last, at last, at last!

During the pregnancy, he poured me bowls of peanut butter Puffins when midnight hunger struck, massaged my swollen feet and spoke to our boys, his lips hovering above my belly. After their birth, in those hazy first few months, he helped me settle the twins each night. He’d hold a twin upright on the couch, in the cold dark, until his body went stiff and sore. Sometimes he’d don a bright orange wrap, giving him the appearance of a Masai warrior, and slide a twin to his chest. If the baby stirred, on the verge of waking, he said, “I take a deep breath, to let him know I’m there.”

In their first year, we learned how to parent our children – and not each other.

Vanessa Hua's fiction and essays have appeared in the Atlantic, ZYZZVA, Newsweek, New York Times, and elsewhere. An award-winning journalist, she is working on a novel set during the Cultural Revolution. Find her at www.vanessahua.com