He may be reaching out to social conservatives in Iowa for a 2016 bid, but that's bad news for his party 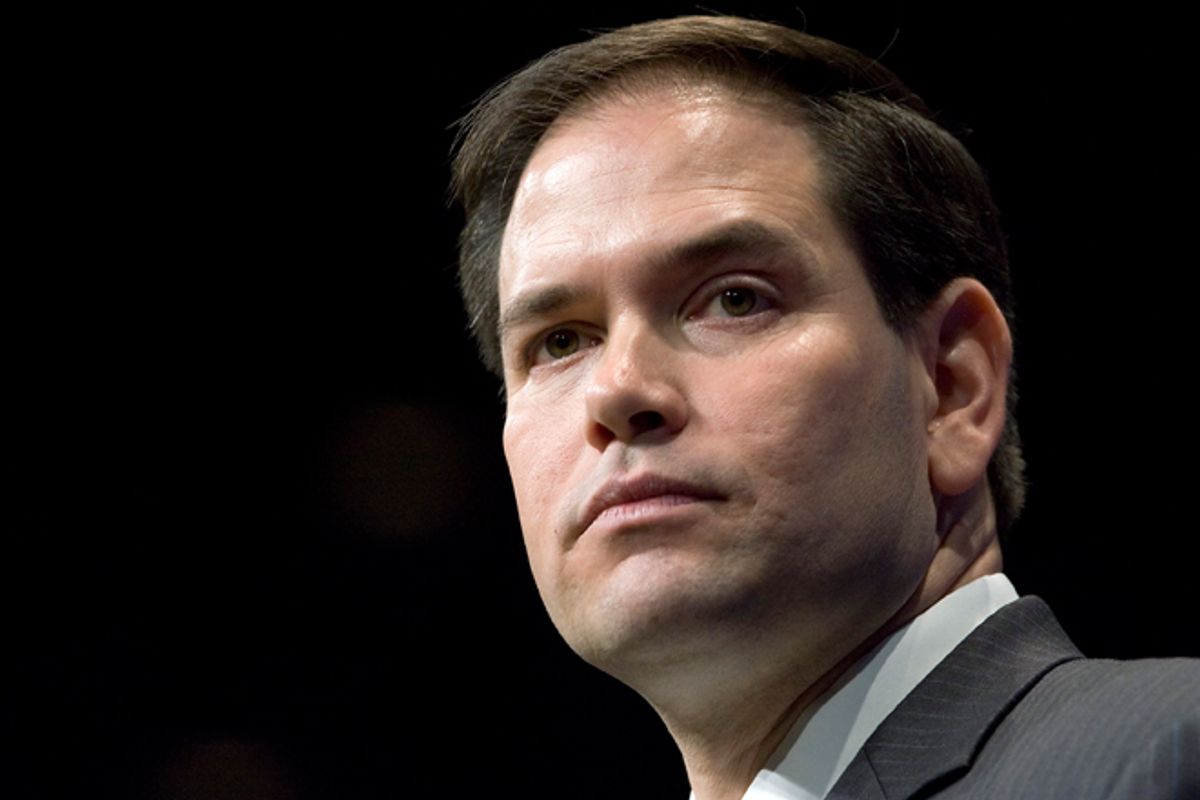 Two things have defined Florida Sen. Marco Rubio in the post-election era, and they may be connected. One, he's become the first potential 2016 candidate to take any of the traditional steps one makes when laying the groundwork for a presidential bid, traveling to Iowa this weekend for a political event. Rubio is the front-runner, for the moment, at least, even though the dust has yet to settle from 2012.

Second, he seems to have zagged to the right while the rest of his party is zigging (or at least head-faking) to the middle. While other national leaders in his party, almost to a person, have condemned Mitt Romney's postmortem "gifts" comments and the candidate more generally, Rubio brushed aside the comments and generously defended Romney. "I hope Mitt will stay involved in politics. I thought he was a great candidate, would have made a great president, and I hope he stays involved in our party," he said in Iowa.

Now, intentionally or not, he's throwing a bone to the social conservative wing of the party, which traditionally dominates the GOP caucuses in the early primary state he just visited. In an interview with GQ published today, Rubio said his party must continue the fight against marriage equality and even flirted with creationism:

GQ: How old do you think the Earth is?

Marco Rubio: I'm not a scientist, man. I can tell you what recorded history says, I can tell you what the Bible says, but I think that's a dispute amongst theologians and I think it has nothing to do with the gross domestic product or economic growth of the United States. I think the age of the universe has zero to do with how our economy is going to grow. I'm not a scientist. I don't think I'm qualified to answer a question like that. At the end of the day, I think there are multiple theories out there on how the universe was created and I think this is a country where people should have the opportunity to teach them all. I think parents should be able to teach their kids what their faith says, what science says. Whether the Earth was created in 7 days, or 7 actual eras, I'm not sure we'll ever be able to answer that. It's one of the great mysteries.

For the record, the earth is about 4.54 billion years old according to scientists, man, but how is Rubio supposed to know that without having a science background himself? (Ehem.)

Whether Rubio is winking at the social conservatives of Iowa, honestly believes this, or just answered the question thoughtlessly is unclear. As Dave Weigel points out, a poll of Iowa GOP caucus-goers from January 2011 found that 68 percent said they believed the planet was created in six days. What is clear is that this is exactly the kind of talk that Republicans need to avoid if they hope to appeal to Americans who don't attend GOP caucuses in Iowa, especially from one of their brightest stars with potential crossover appeal.

Rubio, though extremely popular with conservative activists, has never been a purely base figure like Rep. Michele Bachmann. Instead, he's conscientiously eschewed his party's more alienating rhetoric and sought to expand the Republican tent to include groups like Hispanics while presenting himself as a reasonable statesman to moderates.  So the fact that one of his first instincts when asked a scientific question is to turn to "what the Bible says" is especially disappointing, and disconcerting, as the party tries to remake itself and avoid being confined to the dustbin of history, however old that history may be.