"Red Dawn" pitted Americans against Communists. A reboot casts the enemy as North Korea -- and it's absurd 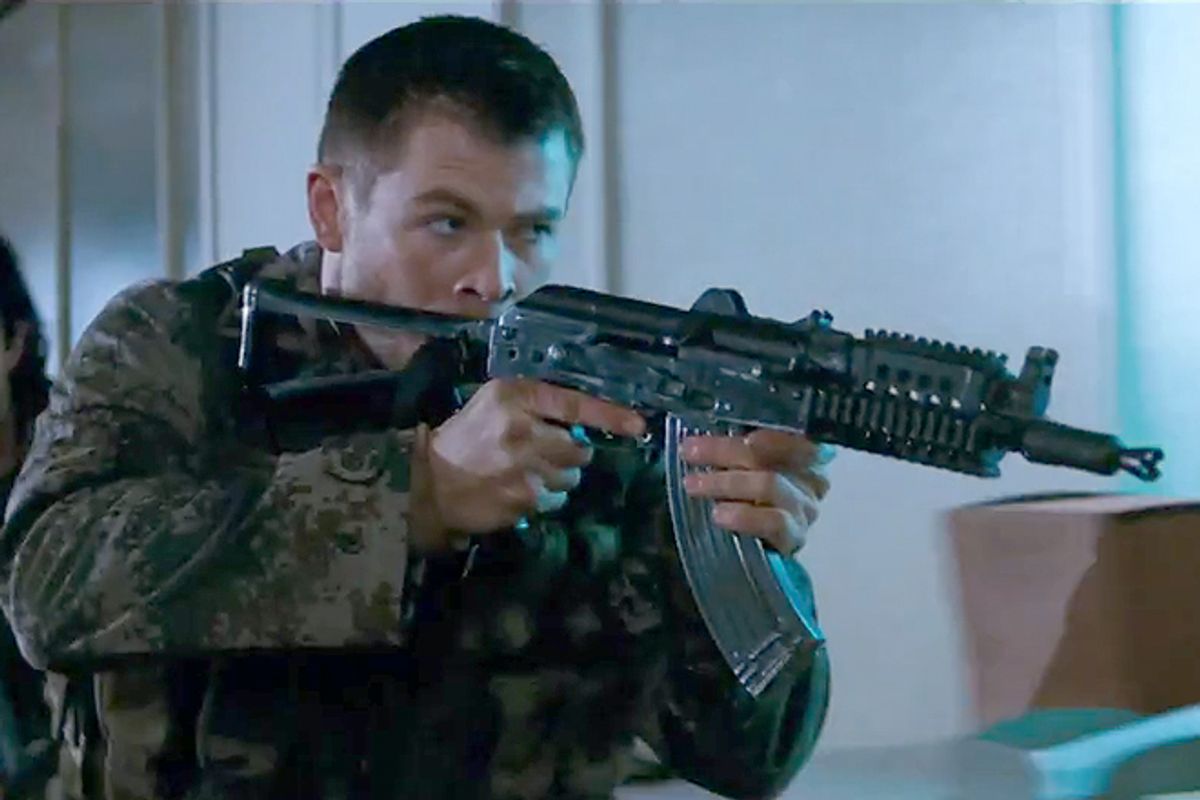 If I told you I was making a movie about a small group of child soldiers, who use IEDs and scavenged weapons to fight a guerrilla war against a larger occupying force, what would you picture? The war-torn sands of Gaza? The refugee camps of Somalia? The mountains of Afghanistan?

The film was released in the height of the Cold War, and its ludicrous premise (best summed up as “Hey kids, let’s go fight an insurrection!”) fit well with the rest of the decade’s fear-mongering anti-Soviet propaganda and jingoistic paeans to American exceptionalism. Let’s not forget that this was the same year that Reagan joked, “My fellow Americans, I'm pleased to tell you today that I've signed legislation that will outlaw Russia forever. We begin bombing in five minutes.”

“Red Dawn” might not have been a great movie, but it fit within the context of its time — a time so far gone as to be almost unrecognizable to Americans today. If you were born the year the Soviet Union collapsed, you would now be 21. Even Mitt Romney no longer thinks Russia is our No. 1 geopolitical foe. As a nation, we’ve seen firsthand the damage IEDs (and a desperate civilian population) can inflict. Instead of one Cold War, there are now dozens of hot zones and areas of civil unrest. At a distance of 28 years, “Red Dawn” seems to sit at the intersection of anachronistic, naive and offensive.

Which raises the question: Why would MGM release a remake? As John Milius, director and co-writer of the original, said to the Los Angeles Times in 2010, “It’s a stupid thing to do.”

The new “Red Dawn,” which hits theaters on Wednesday, is directed by Dan Bradley and stars Chris Hemsworth, Adrianne Palicki and Josh Hutcherson. Filming actually wrapped in 2009, but its release was delayed for over a year due to MGM’s financial restructuring. In 2011, “Red Dawn” was put off yet again, when leaked footage of its Chinese villains caused an uproar in state-run Chinese newspapers. MGM, terrified of losing access to China’s booming entertainment markets, quickly announced plans to scrub the villains and replace them with someone we can all agree to hate: North Korea. This do-over tacked on another million to the project’s overall $60 million budget, as well as another year to its production schedule, which is how it came to be this year’s Thanksgiving box-office turkey.

It’s an admirable amount of sacrifice for a company to make in order to prevent global hostility. In fact, the only better alternative would have been to pull the movie entirely. Instead of worrying about how “Red Dawn” might play in Asian markets, perhaps MGM should start considering how the message of the movie might play in the Middle East, North Africa or even here in America.

To be clear: to release a movie today that celebrates the moral right — nay, responsibility — of well-scrubbed American children to kill invaders is like giving a giant middle finger to the people around the world who see us as the invading army, and whose children have died by the thousands already. “Red Dawn” is a ghoulish parody of reality, served up earnestly and obliviously, to an audience whose enjoyment will, perforce, be directly proportional to its ignorance.

But that’s not the only way this remake dangerously subverts real-world politics. This new “Red Dawn” encourages an idea of America-in-danger that is absolutely ludicrous. Bioterrorism, dirty bombs, black market nukes — all of these are real national security threats that would make for interesting movie plots. But an invasion by North Korea, a country that can’t even feed its own population without international aid, goes beyond lazy writing. It feels as though the authors have consciously abandoned reality, because any intrusion of the real world would lay bare the fact that this movie is about young children fighting and dying in their hometowns, a horrible fate that’s happening to real children, in real towns, all around the world, every day.

I was 6 when the original “Red Dawn” came out. After watching the movie, my older brother and I made our own camouflage by charring wine corks and rubbing them on our faces. We snuck out at night and hid in the eaves of our roof, to pitch pennies at invading raccoons intent on stealing our all-American trash. I had a hiding hole full of throwing stars, nunchucks and other odds and ends ordered from the back of comic books or purchased at dubious truck stops during family vacations.

Did “Red Dawn” make me violent? No. Years of being socialized to be a boy had already done that. But it did affect my understanding of violence. It made righteous retribution seem glorious, sexy, patriotic and fun. It made me feel like I (and my entire country) could be the target of an unprovoked, all-out assault at any moment — a pre-victim, if you will, whose own violent behavior would be excused by circumstance. In other words, “Red Dawn” simplified global conflict down to something a 6-year-old could well understand: You took my stuff, so now I’m going to hit you until you give it back. Is this the message we want to send to the world today? I sincerely hope not.

One scene from the original movie has stuck with me my whole life (well, two if you count the opening where the kid gets shot in the head during history class). In it, Powers Boothe plays Lt. Col. Andy Tanner, an Air Force pilot shot down in Occupied America, who joins the ragtag resistance group. When asked why the invasion happened, he opines, “Maybe somebody just forgot what it was like” to be at war.

The new “Red Dawn” asks all of us to forget what we know about the world at war today. This is a path that leads in only one direction: toward ever-escalating conflict. There’s an old military adage that says that an army is always still fighting its last war. Do we really need to be fighting the ones from 30 years ago?

Hugh Ryan is a freelance journalist and YA author based in New York City. He has written (and ghostwritten) more than a dozen YA books, and has written for the New York Times, Tin House, Details, the Daily Beast, the Writer’s Chronicle, Out, and other venues. He holds an MFA in Nonfiction from the Bennington Writing Seminars, and is the Founding Director of The Pop-Up Museum of Queer History.