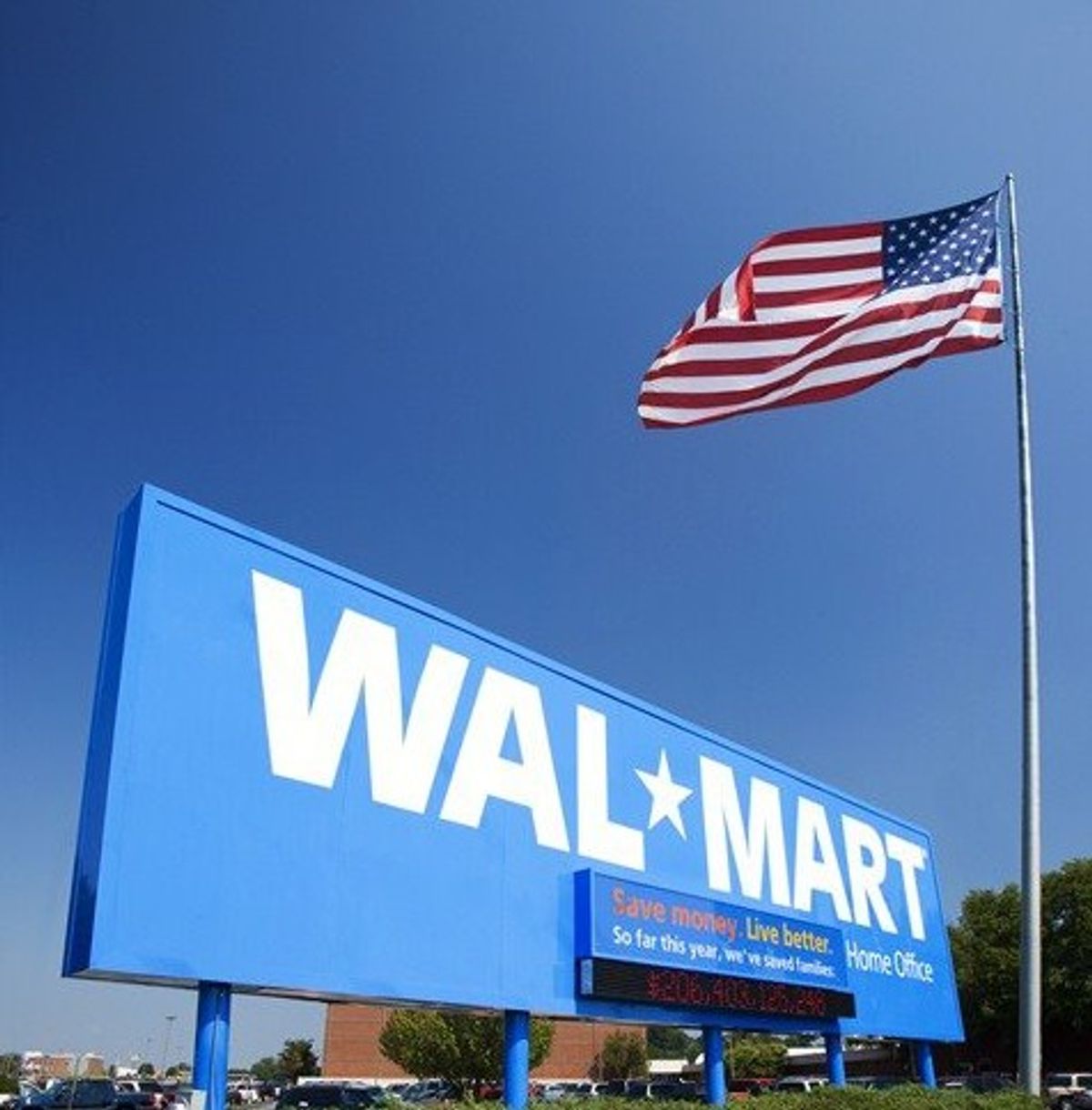 Employees at 1,000 Walmart stores across the country are planning to strike on Black Friday. The holiday period industrial action comes in the wake of a string of strikes by Walmart workers in several states and involving employees throughout the retailer's supply chain. As Josh Eidelson noted at the Nation, "seafood workers [went on strike] in June, [followed] by warehouse workers in September, and by 160 retail workers in twelve states last month."

"Black Friday," wrote Eidelson, "workers have pledged -- barring concessions from the company -- will bring their biggest disruptions yet." Walmart employees across the country have a host of grievances including unsafe and unsanitary working conditions, sexual harassment, excessive hours, forced labor and low pay. Ned Resnikoff at MSNBC flagged a leaked internal document (first obtained by HuffPo) that revealed that base pay  at Walmart's Sam's Place stores can be as low as $8 an hour (or $16,000 per year), with wage increases in increments as low as 20 or 40 cents per hour. To put this in context, Gawker recently highlighted a Demos study that says that raising the salary of all full-time workers at large retailers to $25,000 per year would lift more than 700,000 people out of poverty, at a cost of only a 1 percent price increase for customers.

Then, when Walmart announced plans to open stores on 8 p.m. on Thanksgiving day -- to extend the Black Friday shopping extravaganza in over 1,000 locations -- more workers threatened to join the picket lines and strikes kicked off early in some areas.

Eidelson stressed the historic nature of the coordinated action:

Walmart, the world’s largest private sector employer, has been entirely union-free in the United States since its founding in Arkansas fifty years ago. Walmart’s cost-cutting and just-in-time logistics have revolutionized its industries—even for its unionized competitors. That’s made it an irresistible target for US unions, which have launched a series of campaigns against the company over the past two decades. But until last month, Walmart had never seen workers at multiple US stores go on strike.

That changed October 4, when workers struck at nine southern California stores for one day; a two-day, twelve-state strike followed on October 9. While that ended with an announcement that employees would return to work to mobilize coworkers for Black Friday, the past few weeks haven’t been entirely strike-free. This month has already seen a walkout at an Ennis, Texas, Walmart, and a sit-in and strike during the grand reopening of a store in Richmond, California.

The Black Friday strikes are supported by organized labor, but Walmart workers will likely remain un-unionized for some time. Much of the organizing for the wave of strikes has, however, come from union-backed groups including Warehouse Workers for Justice, a project of the Change to Win federation and the Warehouse Workers Organizing Committee, which is backed by the United Electrical, Radio and Machine Workers of America, as well as OUR Walmart, the retail workers group closely tied to the United Food & Commercial Workers.

Walmart has long been staunchly anti-union (new employees must watch a video, which dissuades workers against unionizing). In line with this, the corporation last week filed a complaint with the National Labor Relations Board to preemptively ban the Black Friday strikes. The complaint alleges that the pickets are illegal. "Experts say that, if Walmart has strong enough evidence, an injunction could potentially be issued in time to block Black Friday pickets. But that’s a very big 'if,'" reported Eidelson:

Walmart’s charge alleges that the United Food & Commercial Workers (UFCW) union is responsible for illegal “representational” picketing – that is, strikes designed to win union recognition from Walmart. Labor law generally forbids unions from engaging in representational pickets for more than thirty days (the US Supreme Court does not apply the same First Amendment protections to labor picketing as it does to “God Hates Fags” pickets at funerals).

Based on Walmart’s charge, and a cover letter sent to the UFCW, the NLRB faces two main questions. First, has OUR Walmart, the group organizing the Walmart store strikes, been acting as an affiliate or agent of the UFCW? And second, are these in fact representational strikes, as Walmart alleges, rather than strikes protesting “Unfair Labor Practices,” as OUR Walmart claims? On both questions, Walmart says yes; OUR Walmart and the UFCW say no.

Writing in the New York Times, Steven Greenhouse and Stephanie Clifford suggest that the NLRB complaint indicates the seriousness with which Walmart is taking the strikes:

Labor experts caution that the complaint, filed on Thursday, could be meant as a warning shot to discourage workers from participating since the labor relations board often takes months to make a ruling, but it nonetheless reflects how seriously the company has come to view a group that it had once dismissed as a nuisance…

All this points to an increasingly fierce contest between Walmart and labor groups that are bent on mobilizing and organizing the company’s work force, with a near-term goal of pressing for higher wages and a longer-term goal of emboldening workers to demand a union.

Some commentators, including Bloomberg's Renee Dudley, are nonetheless skeptical about how much of a dent Friday's strikes will make to the vast retailer. "The strategy risks showing the company’s strength not vulnerability," Dudley noted, predicting that regardless of strikers, Black Friday shoppers will fill Walmart aisles come Friday (and Thursday in many locations). Indeed, Walmart's official line is strident. In an interview with Fox News, Walmart spokesman David Tovar said with an odd frat house cadence, "We're focused this week like a laser on Black Friday ... It's going to be an awesome event at Walmart."

Meanwhile, strike supporters throughout the country will be staging protests to bolster the picket lines. Allison Kilkenny reported that a coalition, including Occupy Wall Street, 99 Pickets, ALIGN, Rev. Billy and the Church of Stop Shopping, Retail Action Project, and other allies will occupy a Walmart store in North Jersey in solidarity with the workers, while Occupy chapters nationwide are also planning demonstrations. A list of solidarity protests and events -- Occupy affiliated and other -- can be found here.

Only by Friday will we see, however, how many of Walmart’s 1.4 million U.S. employees are willing to risk their livelihoods on the picket line.

In this video from OUR Walmart, employees explain why they plan to strike: