A judge searches for free labor

Brand-new (and possibly illegal) low: U.S. judge wants a clerk who will "morally commit" for a year -- without pay 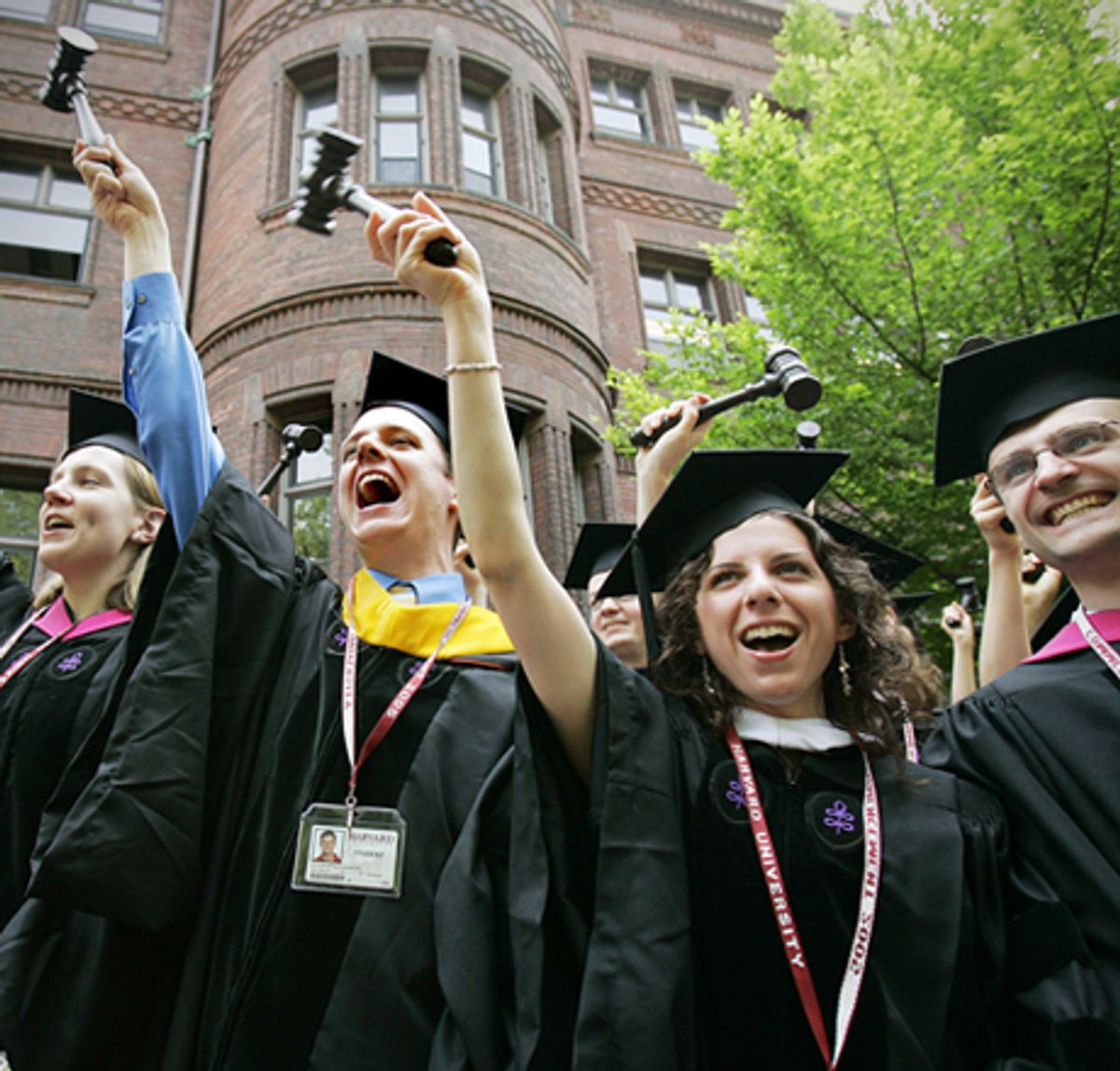 This is a story of what’s happening to the best and the brightest of the echo boomer generation -- the children of the baby boomers, many of whom, to echo Bob Dylan, have finished 20 years of schooling, only to find they can’t get put on the day shift.

Traditionally, the most prestigious job a law school graduate can get straight out of school is a federal judicial clerkship. Holders of these one-year positions are usually much sought-after by big law firms and other desirable employers, and the competition among law students for federal clerkships is ferocious.

Even at elite law schools, only students at or near the top of class have a reasonable shot at a federal clerkship. In addition, now many young lawyers with sterling resumes have begun applying for clerkships. The result is that any federal judge will be deluged with hundreds of highly qualified candidates for an open position.

In response, the government has created an online application site for judicial clerks, featuring strict rules about when candidates can apply and when clerkship offers can be made. William Martinez, a federal judge in Denver, is currently using the site to solicit applications for a standard year-long clerkship in his chambers.

While the requirements for the job look quite ordinary – excellent academic credentials required, two or more years of legal practice experience preferred – the position’s salary is not. More precisely, this job features a salary of zero: “This position is a gratuitous service appointment,” the posting announces, while going on to make clear that the successful candidate will waive any claim to salary, benefits or any other compensation, and that he or she can be fired at any time, for any reason, or no reason, during the course of the year-long appointment.

It gets better: Although Judge Martinez isn’t going to pay the successful applicant, and reserves the right to fire this person arbitrarily at any time, the judge is asking whoever takes the job “to morally commit to the position for one year.” (In other words, don’t think for a moment it’s OK to quit this non-paying job just because a paying job comes along.) As an added extra bonus, the posting states unequivocally that “there is no possibility of the position turning into a paid position with Judge Martinez.”

This is the practical endpoint of a social system that has produced a vast oversupply of bright, ambitious, hardworking and highly educated young people, who are increasingly desperate for any sort of employment that bears a vague resemblance to the kind of work they thought they were being trained to do. The zero-salary job is merely the logical extension of what has been called “the internship rip-off,” which allows employers to exploit unpaid labor under the guise of educational training.

The federal government gives Judge Martinez the money to pay the salaries of two clerks, but he has decided he would like a third one, so he’ll just hire another clerk, and pay that person nothing at all. There are two problems with this. First, it’s arguably illegal. The Fair Labor Standards Act does not, in general, allow employers to not pay their employees. Now the government is full of clever lawyers, who are busy trying to construct ever-larger loopholes in the FLSA, by for instance arguing that the requirement that employees be paid doesn’t apply to people who “volunteer” to work for a public employer. For example, the Department of Justice recently created the new position of Special Assistant United States Attorney. What’s special about this position is that it has no salary.

Without getting into a thicket of legal technicalities, I’ll just note that, after studying both the relevant statute and its implementing administrative regulations, I believe this argument violates both the letter and the spirit of the FLSA. Hiring one person to do a paid job, while at the same time hiring another person through exactly the same hiring process to do exactly the same job, but not paying him or her to do it, is precisely what the statute was designed to prohibit. (Ironically, Judge Martinez requires his applicants to “have high ethical standards and be committed to the rule of law.”)

Beyond the legalities, there’s the moral question of whether this is acceptable behavior. For high government officials to prey on the desperation of the lost generation in this way is a sorry sight – especially when one considers the structural effects of this kind of thing. Obviously, creating a class of prestigious door-opening jobs that don’t feature actual salaries is just another way of ensuring that only the children of the rich have access to such jobs.

Which brings me to the mordant punch line: Before becoming a federal judge, William Martinez was a lawyer for the Equal Employment Opportunity Commission.