Gaza: How did it come to this?

For residents of the war-torn strip, these battles may not end until Israel's occupation of the West Bank does 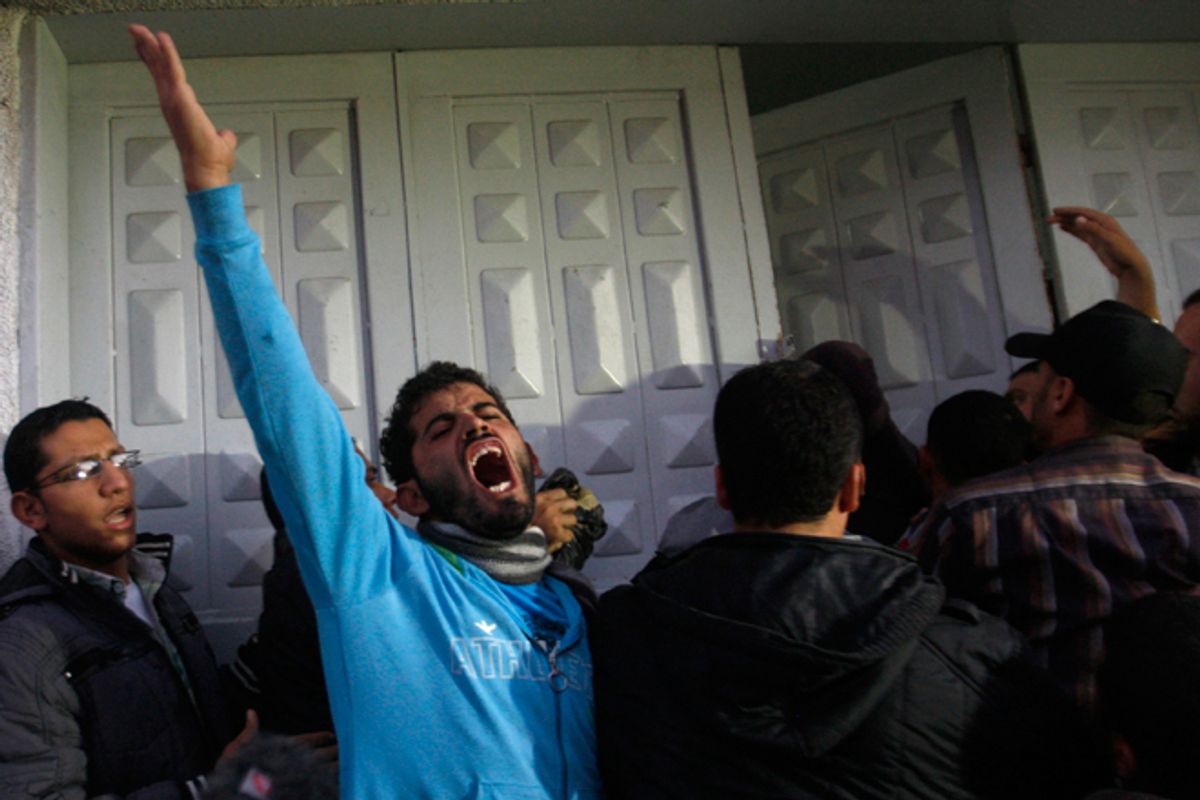 Palestinian men react at hospital after the body of Ahmed Jabari, head of the Hamas military wing, was brought, in Gaza City, Wednesday, Nov. 14, 2012. (AP/Hatem Moussa)
--

JABALIYA and GAZA CITY, Gaza Strip — For the residents of the war-battered Gaza Strip, this is not the war to end all wars.

There was the ferocious Israeli assault in 2008-2009 that left more than a thousand dead. Then there was Operation Summer Rains, just two years before that, where 400 Palestinians and 11 Israelis were killed.

A negotiated cease-fire to the current battle — a week long, heavy exchange of fire between Israeli Defense Forces and Hamas fighters — will offer only a temporary respite from the decades of violence, they said.

Israeli officials have painted the offensive, which kicked-off on Nov. 14, as a mission to deter the Hamas-run government and other armed groups from firing rockets at Israeli towns.

But short-term gains from any Egypt-brokered truce, which is rumored to include a halt in attacks on both sides and a potential end to Israel’s Gaza blockade, will eventually be overshadowed by the chronic, unaddressed ills of the long-running conflict between Israelis and Palestinians.

“There are no guarantees that [any] cease-fire will last forever,” said Mkhaimar Abusaada, a Gaza-based political analyst.

The Israeli offensive has killed more than 138 people, including at least two-dozen children, in Gaza. Militant rockets fired from Gaza, meanwhile, have killed five Israelis and injured 400 others since this most-recent flare up began on Nov. 28.

Eluding both Israelis and Palestinians is a political solution to a 64-year-old conflict that has borne witness to widespread displacement of Palestinians, a military occupation of the West Bank and Gaza, deadly Palestinian suicide bombs and Israeli-built settlements that encroach on Palestinian land in the West Bank.

The result has been recurring flare-ups of tit-for-tat violence tempered by short-lived — and often Egyptian-brokered — cease-fires.

“It’s enough that they [the Israelis] occupy the West Bank. This is our land,” said 70-year-old Abdul Aziz Ibrahim, a village elder in the central Gazan town of Deir Al Balah. Two members of his family — whom Israel named as terrorists — were killed on Monday. “There is no space for us and them.”

Pride for the militants that sent rockets as far as Tel Aviv runs high among many Gazans, a fact that Israel says underscores their concern that Hamas and other groups will resume rocket fire in the future.

“Before, we were resisting [Israeli occupation] with knives, sticks and stones,” said 76-year-old Gaza resident, Salim Isik. “The resistance is better with rockets.”

Even as Gazans grappled Tuesday with the immediate death and destruction — pummeled homes, rising civilian casualties and a mass civilian evacuation from border areas — they were defiant, welcoming calm but with resignation that this war wouldn’t be their last.

“[The Israelis] should lift the siege, and stop their assassinations” of Palestinian fighters, said Youssef Abdul Hamid, a 34-year-old ambulance station chief for the Palestinian Red Crescent Society in the northern city of Jabaliya.

“They carry out the assassinations under the pretense that they are the resistance, but it is impossible to kill the resistance through strikes,” he said. “These fighters are our sons — and no one will give up on their sons.”

Abdullah Mohammed Ahmed Al Attar, a 48-year-old farmer from north Gaza, had fled to a United Nations-run school in Gaza City after Israeli forces dropped thousands of leaflets Tuesday calling on residents in the north, south and east to evacuate their areas.

Al Attar had to leave his house in the bruised Atatra region during the war in 2009 as well, making today’s displacement his second in less than four years.

“[Israeli politicians] only want to change public opinion in Israel,” he said. “They want to say: you were hiding in shelters, and now we made the Palestinians leave their homes, too. But as long as the Israelis are stubborn… there will be no cease-fire.”

Abusaada said that if anything, this round of violence should be a lesson to both sides that military and rocket attacks are not the answer. Israel wants to deter Hamas, but Hamas rockets can now reach Tel Aviv — and Hamas can now bring conditions to the negotiating table.

Even if the underlying issues that feed the violence are unsettled, the current course will only bring death and stalemate, he said.

“The current cycle of violence has shown both sides that there is no military solution to this conflict,” he said. “Israel has used all of its power to deter Hamas, and that hasn’t worked.”