How Mitt suckered his fat-cat donors 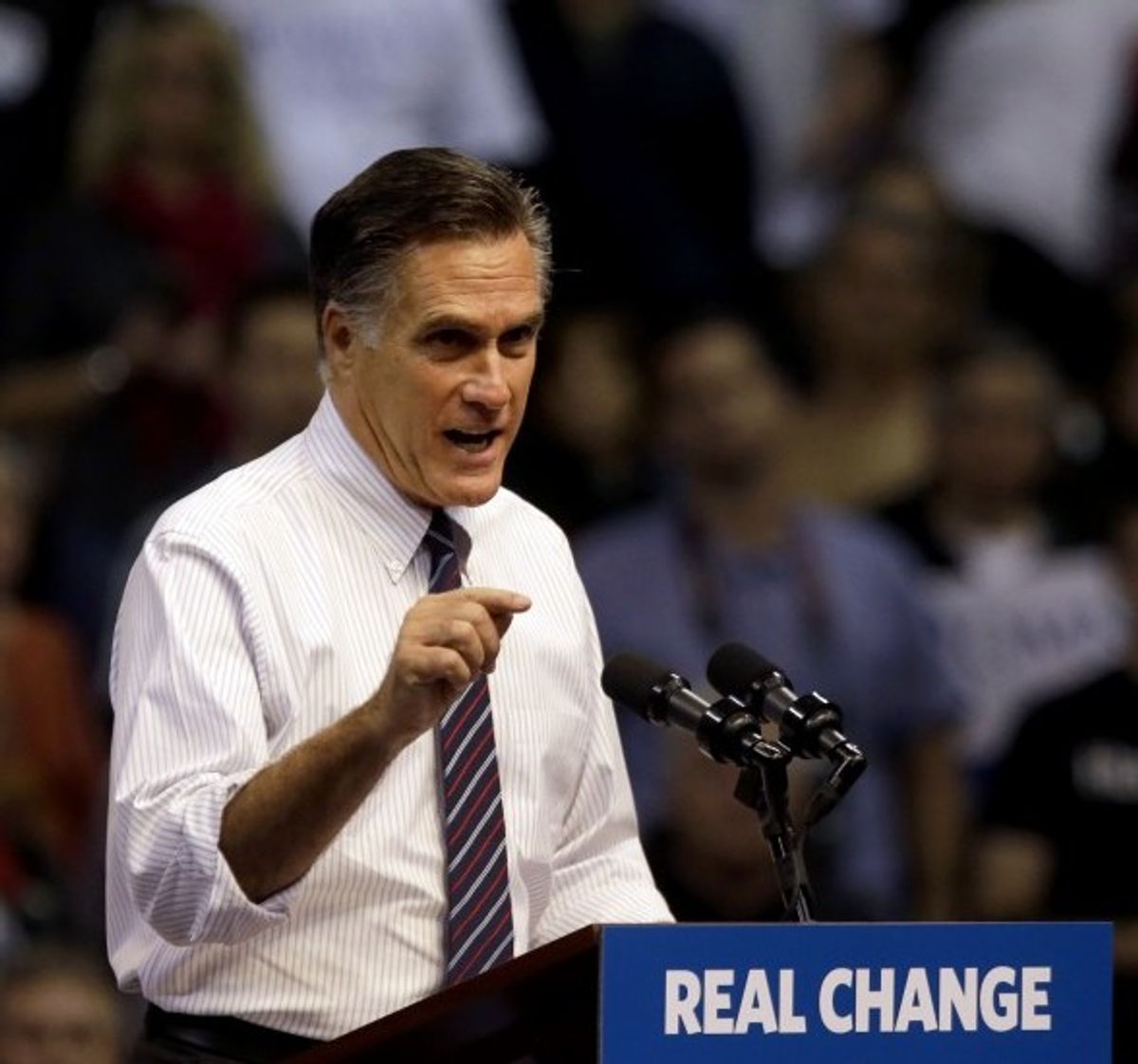 The big chin-scratching story in the aftermath of the 2012 campaign is that the Romney-Ryan campaign was “shell-shocked” by its loss to Barack Obama. "I don't think there was one person who saw this coming," a senior adviser to the campaign told CBS. “There's nothing worse than when you think you're going to win, and you don't,” said another. “It was like a sucker punch."

The most likely explanation for that yawning disconnect is that the campaign figured it was better to appear to be entirely clueless about the race than acknowledge that it had been bullshitting its fat-cat donors about Romney's chances of winning in order to keep the cash spigot open.

That's not how most people saw it. Many attributed the campaign's apparent surprise to “epistemic closure” – to a campaign deeply ensconced in a conservative media bubble that had been systematically “unskewing” the polls and predicting a Romney victory for months. According to this view, Romney's camp was surrounded by people who saw Barack Obama as an abject failure who was deeply unpopular and had little to no chance of being reelected.

But that story really isn't plausible. The right's “unskewed” polling project was based on the notion that the 2012 electorate would look like that of the 2010 midterm, when Republicans enjoyed a “wave” election. While the dimmer lights of the right-wing blogosphere may have convinced themselves that this would likely be the case, no serious observer of American politics could really believe that a presidential election year – where around 60 percent of eligible voters go to the polls – could look all that similar to a midterm in which 41 percent turned out (older people and whites tend to be more reliable voters than younger voters and people of color).

It's also true that Mitt Romney didn't lead Barack Obama for a single day of the campaign in Nate Silver's FiveThirtyEight forecast, the Princeton Election Consortium's forecast, the Rand Corp.'s model or the Electoral College forecasts offered by poll aggregators like Talking Points Memo and Real Clear Politics. The base may have shrugged that off as widespread and systematic “bias” on the part of pollsters and numbers crunchers, but campaign hacks are news junkies and while they could have believed a comeback win was possible, the notion that they saw it as a sure thing – sure enough that Mitt Romney didn't bother to even prepare a concession speech – just doesn't pass the smell test.

If one believes the insiders' accounts, the Romney campaign was basing its strategy on its own “unskewed” internal polls. CBS reported that “their internal polling showed them leading in key states, so they decided to make a play for a broad victory: go to places like Pennsylvania while also playing it safe in the last two weeks.”

A more likely scenario emerges when you consider how Romney's campaign was financed, relying on a small pool of very deep-pocketed donors. As Michael Scherer put it back in July, “Mitt Romney is struggling to get everyday people to give small amounts to his campaign.”

By September, almost 90 percent of the donations to the Romney-aligned super PACs – which were doing the heavy lifting in terms of advertising – exceeded $100,000, according to the New York Times. Only 23 percent of the campaign's donations were under $200 (compared to 56 percent for Obama).

And by the time the conventions rolled around, it looked like the money was beginning to dry up. In September, the New York Times reported, “Mitt Romney entered the final months of the presidential campaign with a cash balance of just $35 million,” and was “racing to find new large donors.” The Romney team “grew so short of available cash that his campaign borrowed $20 million and sharply curtailed advertising.” When that report came out – as Romney and Ryan were “racing to find new large donors” – Nate Silver's model gave them just a 23.9 percent chance of winning. By the end of September, the likelihood of a Romney victory was down to 15 percent – hardly a good bet for a gambling man like casino magnate Sheldon Adelson.

Two weeks later, the campaign held a major “retreat” for those big donors at the Waldorf Astoria hotel in New York. According to the Washington Post, the luxurious three-day event gave deep-pocketed conservatives a chance to “mingle with Romney’s running mate, eat lunch with his wife, talk shop with his strategists, dine with his most colorful surrogate [Donald Trump] and talk jobs with entrepreneurs who are inspirations for his stump speech.” The Post called it “their reward for infusing a record-breaking amount of money into Romney’s operation.”

It's far more likely that the campaign was telling these fat cats that Romney had a great chance of pulling out a win if they'd just dig a bit deeper. They showed their supporters their unskewed internal polling and assured them that their money wouldn't go to waste.

Reality reasserted itself three weeks later, when Barack Obama won reelection with 332 Electoral College votes. And those deep-pocketed Republican sugar daddies weren't happy with the results. "The billionaire donors I hear are livid," an unnamed Republican operative told the Huffington Post. "There is some holy hell to pay.”

Having sold them a bill of goods during the final months of the campaign, the Romney camp – including Karl Rove, who raised an estimated $300 million for his pro-GOP super PAC – had no choice but to feign utter and complete surprise at the results. While Mitt Romney can slink off with Ann and the boys into a wildly rich retirement from public life, his running mate, Paul Ryan, his campaign staff and big GOP bundlers like Karl Rove need to go back to those donors again in the years ahead. Such is the reality for the GOP in the post-Citizens United era.

As Bob Biersack, senior fellow at the Center for Responsive Politics, told CBS, the GOP's big donors “have to feel a little bit embarrassed,” which is “not a common experience for them. They'll have to evaluate how they spent the money and what might be a better use of that kind of resource." He added that "it'll be a harder sell" for Rove and other big-money bundlers the next time around.

With so many big dollars at stake, it would have been disastrous for the GOP's fattest cats to catch on to the fact that they'd been conned; that the campaign had intentionally exaggerated Romney's chances in order to keep the cash flowing. So a few of Romney's senior staffers went to a couple of reliable Beltway reporters and sold them a story of a campaign that had been utterly shocked to have lost – as shocked as they'd be to discover that there's gambling in Casablanca.

That scenario is far more likely than the notion that they were completely suckered by their own rather obvious spin.