My mom refused to celebrate the Puritan zealots of Plymouth Rock, but she did teach me the value of being weird 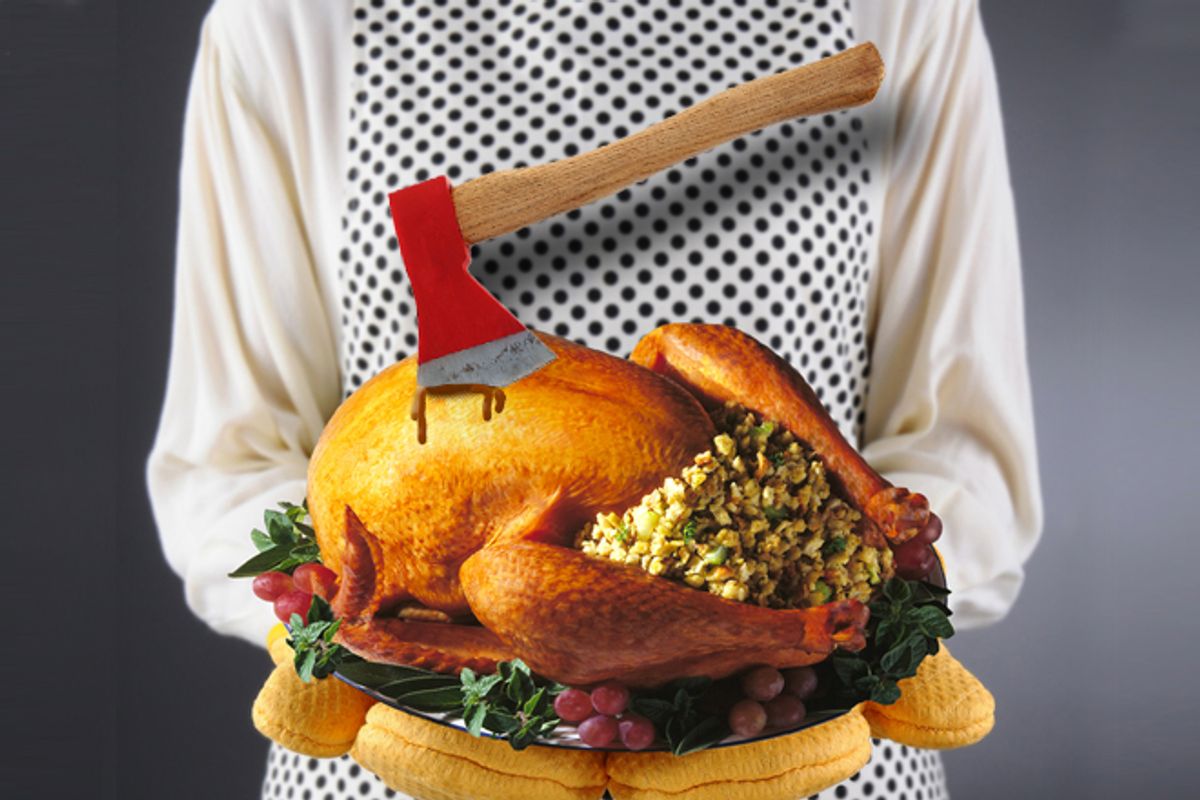 When I was 10 I lived with my mom and dad and three brothers and a sister in a town of about 45,000 on the gulf coast of Florida, on the Manatee River, a brackish tidal river that began in springs to the east and emptied into Tampa Bay.

I don't remember everything that happened. Memories change. But I remember one day in the summer of probably 1963 a typewritten page appeared on the refrigerator. At the top it said, PROCLAMATION. It said that henceforth, it being that the washing of dishes was a task unfairly foisted upon certain individuals and not others, this being not fair, etc., HENCEFORTH each child was to be allotted one stainless steel drinking glass, each to be of a distinct and different color, and each child was henceforth to be responsible for his or her own drinking glass and no other and that throughout the day when any child under the jurisdiction of this PROCLAMATION wished to have a drink of water he or she was to wash and reuse his or her own glass and no other.

My mother had begun making such proclamations right after she started going to work and wasn't around to personally supervise our caucus.

Later that year, along about autumn, she posted another PROCLAMATION on the refrigerator, the gist of which was that HENCEFORTH the Tennis family of Riverview Boulevard would cease celebrating on the fourth Thursday of every November the Thanksgiving holiday that honored the repressive Puritan zealots of Plymouth Rock and the Mayflower, and would instead, in honor of the rational Jeffersonian traditions of the Jamestown settlers, celebrate on the Wednesday before or the Friday afterward. HENCEFORTH BE IT KNOWN, etc.

The basic idea being that the masses of blind American consumers had been tricked into observing this holiday in contradiction of their own best interests, except inasmuch as they themselves were the descendants of those originally fascistic religious oppressors with their ridiculous Pilgrim hats and starched collars who liked to burn women at the stake for expressing their views and were probably, though she couldn't be sure, the direct antecedents of the fundamentalist Baptist evangelists who on more than one occasion had attempted to induce her children to attend their churches in order to be -- and this was uttered with a withering, gonad-shrinking sarcasm -- "saved by Jesus Christ our Lord."

Phooey was the general take on all that, per my mom, and not even a lighthearted phooey but a phooey as maybe pronounced by Malcolm X when he said that his folks didn't land on Plymouth Rock, Plymouth Rock landed on them.

So ever after that and well into my high school years and into college, my family celebrated a Jamestown Thanksgiving on either Wednesday or Friday, in protest against the Pilgrims and in honor of Thomas Jefferson. My mom would explain to our friends and neighbors how she really loved Thomas Jefferson, his ideas, his Enlightenment views and especially his great place up there at Monticello. She didn't like much but she liked architects -- Frank Lloyd Wright and Thomas Jefferson, at least.

Frankly, I'm not sure how well worked-out my mother's philosophy was on all this. She would just pick out things that she detested and abhorred and proclaim that these things were not only idiotic but moreover were supported in vaguely conspiratorial ways by unscrupulous salesmen in collusion with bureaucrats, religious zealots and housing developers, or Baptists, people from the state of Maine and zoning officials in the pocket of big business in collusion with polluters, crackpots and venal sheriffs, all of whom were in collusion with road builders, the oil industry and the concrete and asphalt industry, lobbyists, fundamentalist preachers, right-to-lifers, Christian evangelists, television talk-show hosts, ignorant television newsmen, Yankees, Democrats, fishermen, hunters, bankers, the IRS, sleazy used-car salesmen, tourists, mortgage loan officers, crooked mayors and small-town police chiefs.

Now that I think about it, it was a pretty accurate forecast. Just look around. But back then people figured she was nuts. Or a communist. Which she wasn't. Not even close. More like a paranoid anarchist.

My mom basically thought -- as who hasn't? -- that if everyone would just be smart and work together we wouldn't have polluted rivers and a decaying environment; we wouldn't have ugly suburbs, suburban sprawl, automobile congestion, atmospheric pollution, DDT, Thalidomide babies (medical doctors were also on her list), etc. If only.

The nice thing was, it meant that we kids could have two Thanksgivings. We could join our friends with their families on Thursday, and then on the appointed day we would have our own, and people could come and join us, too. Of course, people would ask what's up with the different day. So there always had to be the explanation of my mother, in as polite a tone as possible, why she preferred the Jamestown Thanksgiving. People would ask if this was a tradition in Jamestown, or if it had been that way in her family. Nope. It was all her deal.

As a kid I enjoyed the intellectual challenges of living with my mom's frequent PROCLAMATIONS as long as it occurred in the privacy of our own home. I did not enjoy hearing my mother lecture the neighbors on the evils of development, freeways and suburban sprawl because it put us kids in a bad position vis-a-vis getting our neighbors to take us out fishing on their boat, not that my mom would have allowed it anyway, what with her principled stand against loud outboards and ostentatious motor craft owned by wealthy absentee vacationers who spent most of their time in New York and just occasionally came down to pollute Florida with their obnoxious fishing parties at which there was disgusting drunkenness and the women always had to clean the fish, she said, which, incidentally, she was not going to be the one to have to do the messy work of cleaning any fish we caught which always stank to high heaven and were probably full of PCBs and mercury and DDT anyway because of all those damned polluters from up North, who were descended from the damned Pilgrims and Puritans of Plymouth Rock.

So here's the moral and philosophical takeway if there is such a thing: People talked about "freedom" but we lived it. We were mavericks. You really could refuse to celebrate Thanksgiving on Thursday. You could do that.  And sometimes I think that just that one thing, realizing that you could actually change the day you celebrate Thanksgiving on, that in some way that was a lifelong lesson about what's mandatory and what's optional. It turned out that what other people thought was mandatory my family pretty much proved was optional. For us kids it meant we had the freedom to figure stuff out on our own and pick and choose what made sense and what didn't. It really was the big American experiment.

We were different. That was the basic line. We were proudly different.

And what's more American than that?