When Mom didn't show up for our weekly video chat, I knew something terrible had happened to her, or my imagination 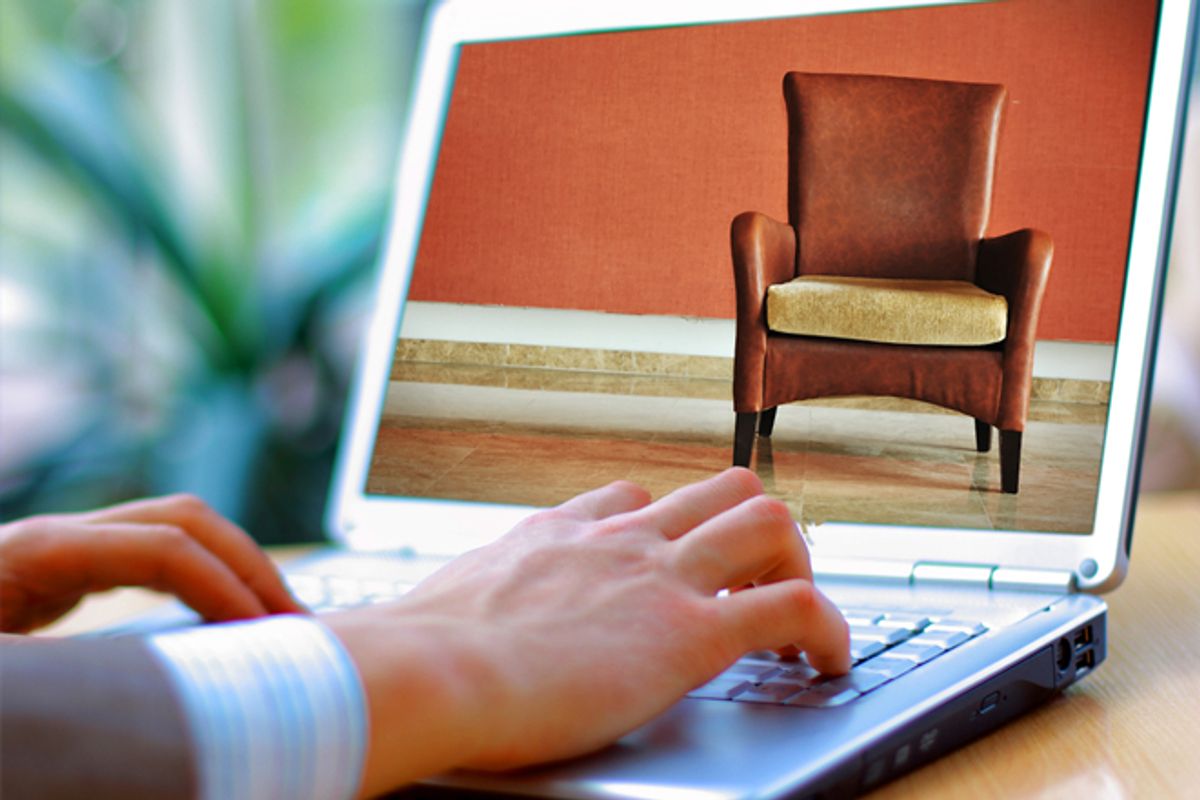 There is a room in New York City with which I am very familiar. But I am familiar with it in two profoundly different modes.

In one mode, it is a room in which I sit. It is a room where my mother sits and works, surrounded by piles of papers. It was once my father's study. Much has changed since he occupied it. Much hasn't. It is dynamic, a country with different regions.

In the other mode, however, I see it but do not occupy it. It is an image, at times as still as a photo. More often, it's a movie. And this movie stars my mother, who sits in her chair accompanied by her array of toys and funny stuffed animals who come trotting into view to the delight of my children. This room is the backdrop to our video conferences. They used to take place Sunday morning. Now they occur Saturday morning.

On my mother's end it is a still shot -- the camera on her iMac is unmoving. She has accompanied us for hours. Her stamina in these video conferences is incredible. At times I feel like she is a virtual baby sitter. She is so inventive! The monkey, Flamingo, Duckie, I could go on. And music. If there is one shortcoming it is her limited mastery of the computer.

There's something about coaching parents through technology that brings out the worst in people. Or at least in me. But I had an epiphany. The epiphany was twofold. First, I realized I was being a jerk. I should be patient. But that lasted as long as a birthday candle.

More usefully, I discovered Log Me In Pro, which allows me to access my mother's computer. I can get her all set up for a video chat. This has produced a strange, unexpected bit of cinema: I sometimes access her computer and see the room without her.

There is something very strange about seeing streaming footage of a still room. The chairs at odd angles. The absent presence felt. As I said, I have known this room all my life. There are many absent presences. My father, mainly, and also old versions of me. And, I suppose, of her.

I have, at times, taken a strange pleasure in just staring at it, the light at different times of day. A few times I have called out: "Mom! Mom, are you there?" And in this way circumvented a phone that was off the hook, and so forth.

Toward the end of dinner, one woman told a story: her father had died; she was 12; her mother met another man quickly. They took a vacation in the Caribbean. The woman telling the story was drunk. Her mouth purple from wine. Her eyes narrow. The story faded, trailed off. The feeling was of intense loneliness -- being 12, her father dead. Her mother far away.

Then, she tried to redeem it all. "My mom came home, tan, she seemed happy. She had a great experience."

I found this very depressing. "Just say it was awful! You don't have to blame her. But don't try and make it sunny. That is really sad." Of course I did not say this.

Instead I had the horrifying epiphany that something had happened to my mother. I had neglected to call because of this dinner party. And now ... I let it go. I was being silly. The woman's story had affected me somehow.

Sunday morning, I called. I got the machine. Is there anything more chilling than a voice on an answering machine belonging to someone about whom you are worried? That naive, innocent voice that could not have known, at the time, what was coming?

At which point I hurriedly accessed her computer, and was presented by that still-photograph-like livestream of her study. A lovely morning light came in. The chairs were in conversation with one another. Papers piled on the desk. The ambiguous sense that life had been here a moment earlier. Or that death had. I was in full melodrama mode now. "I should have called last night!" I thought.

I called the neighbors, then the doorman. A full-on panic attack. The neighbors were out. The doorman said, "I'll go up and check. But someone just left with their dog. I have to wait till they come back." I wanted to ask, "Who? Which dog?" I wanted to yell, "Who gives a shit about the dog walker! Get upstairs!" I pictured ...

I needn't spell it out. I had crossed the line of panic. Your mother is a thousand miles away. You are streaming footage of sunshine falling beautifully into her study. Its layered topography is a complex map of past and present. It is, in a way, a map of her mind, and only her mind can navigate its meaning. You have the thought that she may be just out of the frame, lying on the floor.

The doorman said, "Give me a few minutes." I got off the phone. I gave him a few minutes. I pictured a dog squatting. I rooted for the dog to hurry up. I didn't even know which dog. Was it the lab that belongs to the Israeli guy on 4? Or was it Judy's geriatric Dachshund?

I refrained from shouting, "That's because my mother is lying dead on the floor!"

I was starting to palpitate. I now realize this was a feeling I sometimes had in the years just after my father died. The feeling that my mother could be anywhere. That panic that exists alongside a certainty that you are being silly. The dialog between the two ideas: "Horror horror horror!" says one, and the other says, "Oh for goodness' sakes, take it easy."

The doorman, a lovely guy, continues, "I just saw that there were a few newspapers on her front door."

Newspapers piled at the door means the resident is taking a trip. To the country, to the moon, to Long Island. Somewhere. And it hit me: Just this past Tuesday I had been in that room. I had sat at that computer. I had helped my mother buy train tickets to Boston.

The "you are being ridiculous voice" was now ascendant, as it always has been. A joy rose within me. I thanked Andrew the doorman.

I got off the phone. I paced in circles. What an idiot I had been. I almost cried with relief. Then another thought entered. She had recently had shoulder surgery. Arm in a sling. Not a good time to travel to New Orleans for Thanksgiving.

I went into the kitchen where my wife and children sat. I forgot to mention that aspect: I had gone in there while waiting for the dog to take a crap. My wife has seen my stricken face and asked what was going on. And I told her. She took it seriously. Which made me happy. Now I was back.

"I'm an idiot!" I yelled joyously. I told the story.

She said, "If she can take a train to Boston, why can't she fly to New Orleans?"

"That's a good point!" I grabbed my son, 18 months, and shot a brief and rather castigating video to email to my mother posing just this question.

She got home late Sunday afternoon, and called. We laughed about it. But then I said, "Seriously, you should come down here and visit us!"

What I meant, and I think she knew it, was, "I thought you died! I need to see you!"

We agreed to mull it over. Monday morning I called and pressed the point. She was coming around to the idea. I looked into airfares. Jet Blue, no fools, kill you for flying on the Wednesday before Thanksgiving. And so we bought the cheapest available flight. Tuesday at dawn. I handled the tech, making all the arrangements. Tonight she packed. And tomorrow she arrives.

That is the story of my Thanksgiving Anxiety Attack. I know it's not the only one out there. Mine has a happy ending because it's not an ending.

When she is here, perhaps on Thanksgiving day, I want to gather my whole family, wife, kids, mother, and log onto her computer to start a video chat. There on the screen will be the moving picture of that still room. We will all watch the stillness of her study, and the light, together. And give thanks.

Thomas Beller is the author of several books of fiction and essays and a founder Open City Magazine and Mr. Beller's Neighborhood.