Threats to Thanksgiving: A right-winger's guide

Conservatives discover the "War on Thanksgiving" 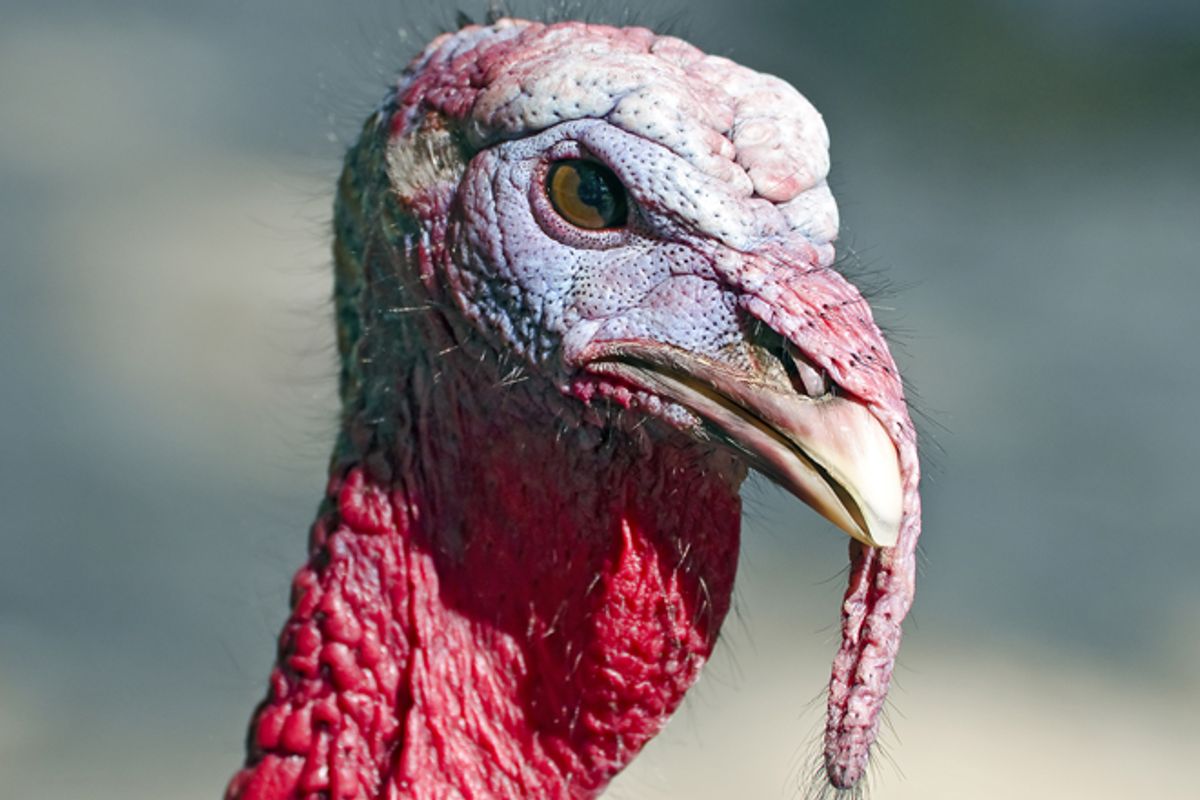 If you are preparing for a relaxing Thanksgiving, be forewarned: Liberals want to  undermine your holiday cheer.

Here's our guide to the most sinister forces of what some conservatives are calling the "War on Thanksgiving":

• Barack Obama: Let's start at the top. Last year, the president was alternately trashed by conservatives for not mentioning God in his Thanksgiving Day YouTube address and for describing the Obama family's Thanksgiving Day plans thusly: "Like millions of Americans, Michelle, Malia, Sasha and I will spend the day eating great food, watching a little football, and reflecting on how truly lucky we truly are." Social conservative Bryan Fischer was quite angry about the "luck" thing, saying that it really "grinds my gears" to hear the president talk that way, and this "is the most offensive thing that  I've ever heard President Obama say: that we are lucky, that everything we enjoy in America is the result of pure luck. It's not. It has to do with our values, it has to do with our faith in God, it has to do with God's providential care."

Fox News, on the other hand, called Obama a "product of the secular left" for not mentioning God in his video, though Fox didn't mention that Obama did thank God in his written statement on the holiday. Jon Stewart summed up the whole controversy, saying he didn't realize Thanksgiving was even about God — he thought it was about "a bunch of pagans teaching religious zealots how to farm."

• Sharia turkeys: Is there anything more terrifying than a turducken? According to Islamophobe blogger Pamela Geller, that would be a halal turkey. Last year, Geller ranted against what she called the "stealth halal" conspiracy by the Butterball company, because all of its turkeys are certified halal. "Non-Muslims in America and Europe don’t deserve to have halal turkey forced upon them in this way, without their knowledge or consent. So this Thanksgiving, fight for your freedom. Find a non-halal, non-Butterball turkey to celebrate Thanksgiving this Thursday," Geller wrote.

• Politically correct buzzkills: Andrea Peyser of the New York Post (previously seen on Salon's  hack list) is sick and tired of all these "buzzkill forces of the politically correct" who have waged the War on Thanksgiving, to the point where "the battle against a holiday once considered as American as pecan pie has eclipsed even the infamous War on Christmas." Peyser angrily wrote this week about how Victoria's Secret was forced to apologize for sending a model down the runway in Native American-style underwear, including a headdress. "I wonder what manufacturers will ban next? Barbie dolls, for promoting eating disorders? Charlie Brown, for pushing bullying? Ridiculous." She adds: "If only Massachusetts voters were as creeped out by Sen.-elect Elizabeth Warren’s (false) claims to be Native American, which she used to jump-start her career as a professor at Harvard Law School. Now that’s offensive."

• American Indian student groups: The University of Virginia's American Indian Student Union held an anti-Thanksgiving potluck on Monday to raise awareness about Native American culture and to discuss "what role Native Americans played in Thanksgiving — contrast that with the typical American view of Thanksgiving," according to Katelyn Krause, the president of the group. Conservatives, naturally, found this objectionable. Eric Owens of the Daily Caller described the event's "anti-Americanism." And Nathan Harden wrote on the National Review Online: "The life of the modern liberal consists of one imagined war after another. Never is there an end to grievance."

• "The era of food dependence": Julie Gunlock of the National Review Online warned last year that Americans should reflect on how Thanksgiving is all about food, but "the food they love is under attack." This, she argued, is part of the new "era of food dependence," where people rely on the federal government for food: "Food prices are up a full 13 percent this year. Governments at all levels are conspiring to tell Americans what they can and cannot eat through an over-sized helping of regulations and taxes, which push food prices up, eliminate choice, and make our food taste worse."

• Communism: This is kind of a tricky one, because, as we all know, communism is a constant threat to our society, but we also have communism to thank for the creation of Thanksgiving in the first place. Last year, Rush Limbaugh explained: "The original contract the Pilgrims had entered into with their merchant sponsors in London called for everything they produced to go into a common store, and each member of the community was entitled to one common share ... Nobody owned anything. They just had a share in it. It was a commune." But the Pilgrims rejected this because it was ineffective and instead opted for a more capitalist-style system, according to Limbaugh. Bill Federer of World Net Daily explained further this week, sort of: "This Thanksgiving, as we sit around the table of plenty, we can add to the list of what to thank God for that our Pilgrims ancestors did not embrace President Obama’s plan of redistributing the wealth, but rather opted for individual capitalism. As a result, they enjoyed an abundant harvest."

• Diversity: A memo sent out to the staff of Seattle public schools in 2007 encouraged teachers "to be sensitive of diverse experiences and perspectives and still make the holiday meaningful for all students," because "for many Indian people, 'Thanksgiving' is a time of mourning, of remembering how a gift of generosity was rewarded by theft of land and seed corn, extermination of many from disease and gun, and near total destruction of many more from forced assimilation." Michelle Malkin objected to these "oppression studies 101": "Look, I’m all for truthful, historically accurate lessons about Thanksgiving," she wrote. "But the 'diversity'-peddlers’ agenda is not about historical accuracy. It’s about guilt-mongering and institutional racism indoctrination."

• "Warmists": More commonly known as people who believe in global warming, "warmists" like Mother Jones are bumming everyone out this Thanksgiving with their doom-and-gloom predictions about how rising temperatures could affect foods typically eaten on the holiday. William Teach, writing an article called "Warmists Bring Scary Stories About Doom" for Right Wing News, dismissed the theory: "Ah, the old 'sometime in the future bad things might possibly maybe kinda sorta happen' canard."

• War on Christmas: Thanksgiving is partly about kicking off the Christmas season. So that means that it's already time to get concerned about ruining Christmas this year. According to Pat Robertson, it's atheists. In a "700 Club" segment earlier this week, Robertson decried the "miserable" atheists who "want to steal your holiday away from you" because “atheists don’t like our happiness, they don’t want you to be happy, they want you to be miserable. They’re miserable so they want you to be miserable.” (Somewhat unrelatedly, last year, after seeing a clip of Condi Rice talking about eating mac 'n' cheese on Thanksgiving, Robertson wondered: "What is this mac 'n' cheese? Is that a black thing?")