Best big TV on the market

If you're looking for a monster screen to anchor your living room, go with the ST50 series from Panasonic 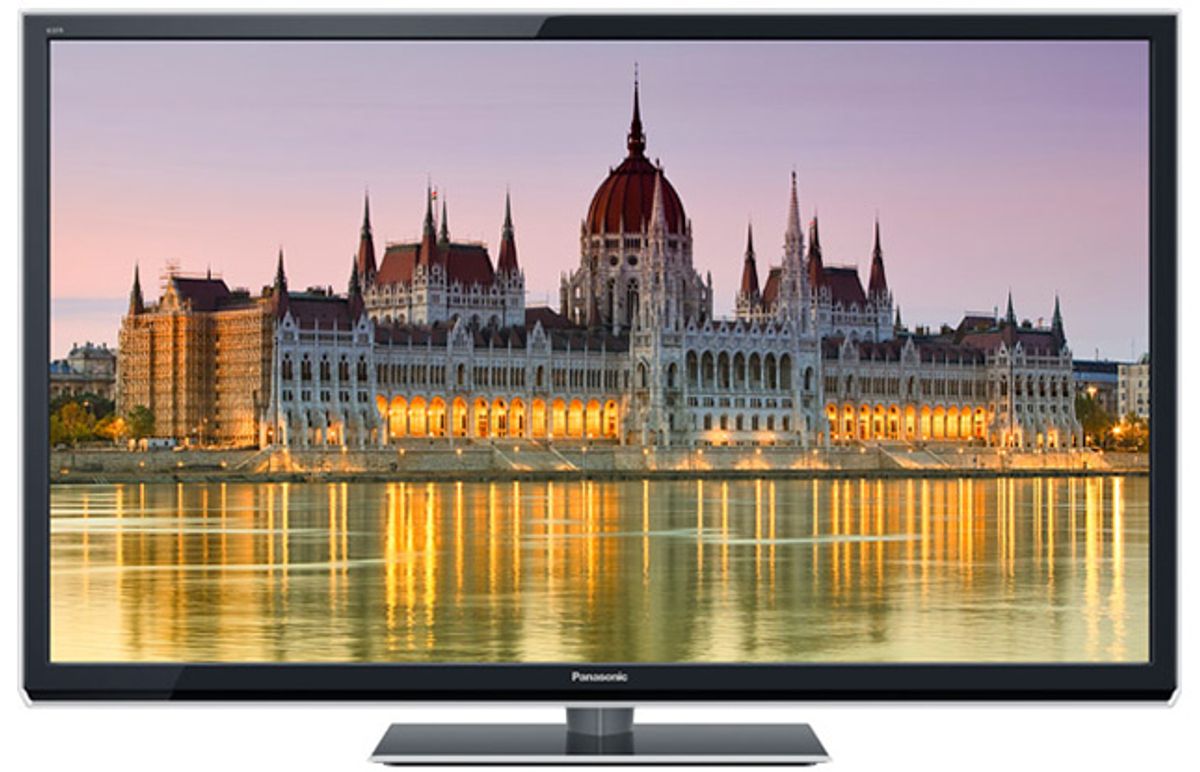 As far as really big TVs go, our pick is same as our pick for best TV overall, the ST50 series from Panasonic. In both 60- and 65-inch sizes, it offers excellent value and some of the best picture quality available.

Check out our Best TV article for the full explanation on why the ST50 is so good. If you're curious about what sized TV to buy, check out this appropriately titled CNET article How big a TV should I buy?

For the rest of this article we’ll sum up the ST50’s pros, and cover some of the more varied big screen competition and why they’re not as good.

David Katzmaier, Senior Editor at CNET, probably sums up the ST50 best, “With flagship-level picture quality for a midlevel price, the Panasonic ST50 series sets the value standard among videophile-grade TVs. The picture is so good, in fact, that it scored the same as the flagship VT30 I lauded last year, and in person it's tough to tell the two apart. If anything, the ST50 looks better. It sets a lofty standard for HDTV picture quality this year, and one I feel confident only a few TVs will approach. I doubt any of them will do it for less money.” He gave the ST50 4.5 out of 5 stars, one of the highest ratings of any big TV in 2012. In the breakdown of their ratings, he gave it a 9/10 for performance, and a 10/10 for value.

Consumer Reports gave the P60ST50 a 77, one of their highest ratings for big 2012 TVs as well, giving its picture quality their highest rating of “Excellent.” They further said, “This model had excellent high-definition picture quality. It did a top-notch job displaying the finest detail. Color accuracy was excellent, so colors looked very natural and life-like. Very good contrast–the difference between the darkest blacks and brightest whites–gave images depth and dimension. The brightness level was good, making it a suitable choice for most rooms. The TV had very deep black levels, among the best we've seen.”

Home Theater's Tom Norton, after reviewing the P55ST50, had this to say, "With a remarkable price, superb 2D performance, and 3D that can only be bettered by spending a lot more (and often, not even then), this Panasonic is a no-brainer." He gave it a 4.5/5 for 2D video performance, and 5/5 for value.

On Amazon, the ST50 series has a 4.5/5 average customer review rating, with the majority of them (67%) 5 stars. The percentage of positive reviews goes above 80% if you include 4 star ratings as well.

Like in our Best TV article, we also recommend Panasonic’s VT50 as a step up. It’s slightly more expensive, but to most reviewers eyes, it offers even better picture quality. In his 4.5/5 review of the 65VT50, David said “The Panasonic TC-PVT50 series produces some of the best pictures ever, with exceedingly deep black levels, highly accurate color, and perfect screen uniformity and off-angle performance.” He gave it a 10/10 for performance.

I reviewed the smaller, 55-inch, P55VT50 for Sound+Vision magazine, and found it to be one of the best performing TVs I’ve reviewed in over 10 years of TV reviewing. Consumer Reports also reviewed the 55VT50, giving it a 79 and proclaiming it had “excellent high-definition picture quality” and “very deep black levels, among the best we've seen.”

A logical question you’re probably asking is whether to get the 55-inch VT50 or the 65-inch ST50, given that they’re the same price. A tough call, to be sure, but keep this in mind: side by side, you’d probably see a difference between the two. However, with just one in your home, the larger screen size of the ST50 is likely a bigger deal than the slight improvement in picture quality with the VT50. The ST50 is going to be a lot bigger, with only a tiny decrease in performance compared to the VT50 (and it still looks better than most other TVs out there).

A lower-priced option, the TC-P60U50 ($900), is an excellent value, but has not been widely reviewed. CNET gave 4/5 and praised it for an excellent black level, but noted it "washes out in bright room lighting, and it can't get as bright in its most accurate picture mode as some plasmas this size."  They explained further "It doesn't do as well with the lights turned up, however, so if you can spare the money, or want more choices in size, you should consider stepping up to something like the ST50." It also has only two HDMI inputs. So it's a great value, but stepping up to the ST50 yields a noticeable step up in picture quality (in the vital areas of brightness and contrast ratio).

And what about the competition? Price-wise, Samsung’s closest competitors are the PN60E6500 ($1,600) and the PN64E550D ($2,000). CNET gave the E550 3.5/5, saying, “The image of the Samsung PNE550 washes out significantly in normal room lighting. It can't match the black-level performance of the best like-priced plasmas.” Consumer Reports gave it a 71, and a “Very Good” for picture quality. The average Amazon customer review is 3/5, with almost as many one stars (6) as five stars (8).

The E6500 fared better with CNET, scoring a 4/5 and reporting, “Despite the deep blacks, the E6500 isn't able to get as bright as other TVs and so contrast suffers ever so slightly. The TV is merciless with noisy sources and presents them as is.” Performance was rated as a 7/10, as compared to our pick, which got a 9/10 from the same reviewer. Amazon was kinder with the E6500 as well, with a 4 star average from 91 reviews. Most (50) were five stars.

How About a Big LCD?

While LCDs rarely (if ever) compete well with plasmas in terms of price or overall picture quality, in the larger screen sizes their price difference gets even more severe. A comparably sized LCD can cost 50% or more than a plasma. LCD’s main advantage over plasma is light output. A plasma will work well in most rooms, but if you have a lot of windows, and watch a lot of TV during the day, LCD might be a better choice. So your options are either spending more for the same size, or spending the same money for a smaller size.

To that end, Sony’s $2,000 55-inch KDL-55HX850 is one of the better-reviewed LCDs. CNET gave it 4/5, saying “The Sony KDL-HX850 delivers excellent picture quality for an LCD, with deep blacks and plenty of detail in shadows.” Consumer Reports gave it a 72, and an “Excellent” for picture quality. Tom Norton of Home Theater magazine, gave it a 5/5 for 2D video performance, concluding that the HX850 had, "superb black level, crisp color, and near-reference-quality 3D."  For the same money, though, you get amuch larger screen, a better contrast ratio, and better off-axis viewing with the Panasonic TC-P65ST50, but the Sony will be brighter.

Lastly, whenever I’ve spoken to people about really big TVs, they always ask about Sharp. It seems Sharp’s Sulu-based “Oh my” advertising struck a chord. However, their LCD TVs don’t offer the picture quality of Samsung or Sony’s offerings. For example, Consumer Reports’ highest-rated Sharp is theLC-60LE745U ($1,600), which they only give a 66 and a “Very Good” for picture quality. They further explained “Color accuracy was acceptable, but below that of most sets, with flesh tones tending toward orange.” They also noted one of the main drawbacks with LCDs: “When we moved off to the sides the picture lost color, so flesh tones looked washed out, while black levels brightened, significantly reducing contrast.” David Katzmaier gave this same TV 3/5, saying “This Sharp performed worse overall than its less-expensive linemate.” That linemate he mentioned is the LC-60LE640U ($1,300), which he gave a 3.5/5. So for basically the same money, our ST50 pick is lauded as having some of the best picture quality available, as opposed to these two Sharp models, which are rated as mediocre at best by the same reviewers.

How About a Really Really Big TV?

However, if a really, really, really big TV is what you’re looking for, Sharp is the only company that offers greater than 70-inch TVs. You’re only buying size, though, as picture quality is not great. David gave the 80-inch LC-80LE632U ($4,000, $50/in) a 2.5/5, noting “Picture quality is underwhelming for the price you pay: lighter black levels and rosy reds mean it can't even keep up with cheaper (and inevitably smaller) LCD and plasma TVs.”

I reviewed the more expensive LC-80LE844U ($4,600, $57.50/in), and found it extremely underwhelming, with several serious issues: “With its poor off-axis picture, rampant noise and artifacts with anything less than pristine Blu-ray content, and always-on motion interpolation, the LC-80LE844U doesn’t compare well with other flat-panels.”

Because our ST50 pick and even the step-up VT50 aren’t available in sizes above 65-inches, it’s impossible to make a direct comparison. For those of us who have compared these larger Sharps to the (smaller) competition, it’s clear that size was Sharp’s goal, at the expensive of overall picture quality. If you’re looking for an enormous TV, I recommend checking out a projector instead.

So thanks to picture quality better than most other TVs on the market, and its excellent value, our pick for a really big TV is Panasonic’s ST50 series, which is available in 55-, 60-, and 65-inch sizes.