From Plymouth Rock to Thanksgiving at Best Buy: The Puritan ethic went spectacularly astray, all for an iPad mini 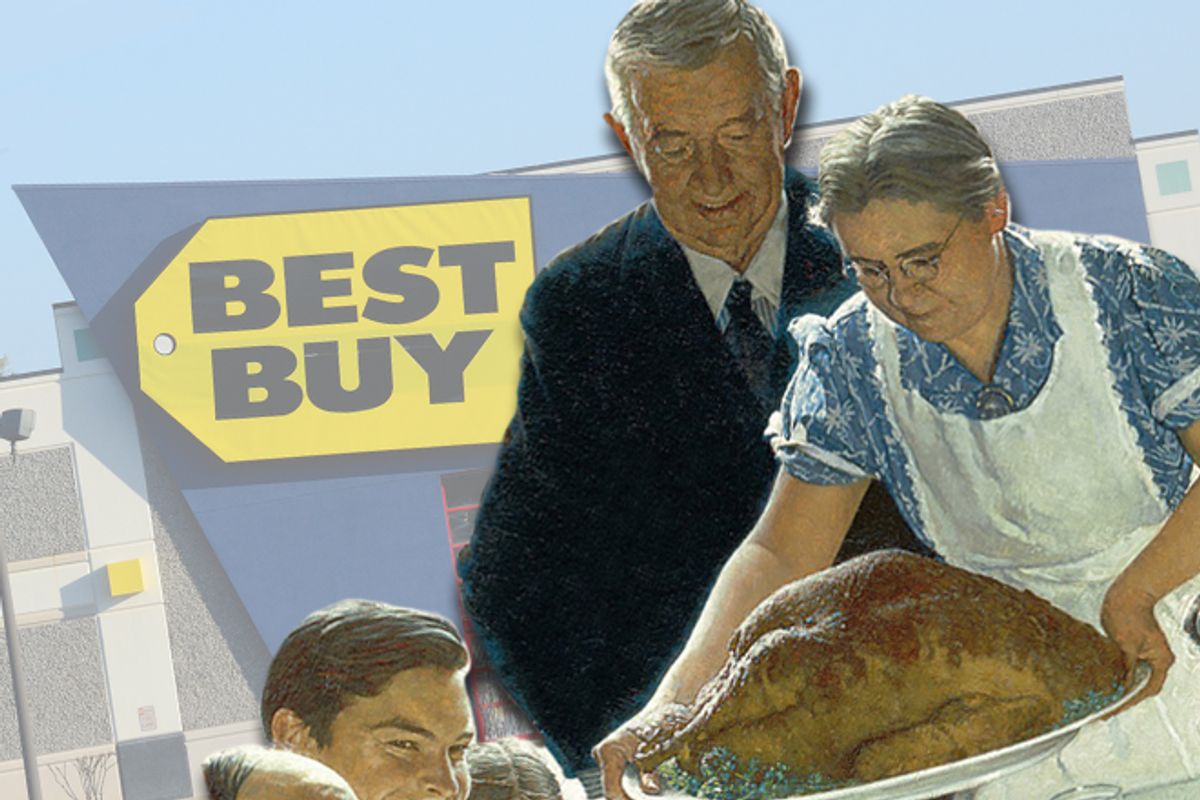 For wily veterans of a decade of Black Friday doorbuster sales, 2012 was the year that the last semblance of a boundary between the actual day of Thanksgiving and the formal commencement of the holiday shopping season finally collapsed. It wasn't just the decision by some of the biggest retailers to move their opening hours earlier than ever before. For many customers, the exact time when the doors were unlocked was irrelevant, because Thanksgiving had already become completely subsumed in shopping mania. What difference does it make if the doors open at 8 p.m. or midnight, if you were already in line days earlier?

Consider the example of the Kelley family in Fort Myers, Fla., so determined to sacrifice nothing of their quality of life while in quest for the perfect deal that they showed up in front of the local Best Buy's doors on Monday, equipped with a dinner table.

This is what we call not messing around:

"[Over the years] we've pretty much gone from not sleeping in a tent to a tent and slowly progressed to where we've got everything that we remember we need," said Sean Kelley, who is ready to have his Thanksgiving feast in line, [as reported by WSVN.com in Miami/Fort Lauderdale.] "On Thanksgiving, mom comes out with the china and the plates, and we've got everything you have on a normal Thanksgiving table."

That's some real can-do American pioneer spirit right there, worthy of the Puritan settlers who struggled through fierce New England winters to bequeath us our most indigenous of holidays. The merger of festival and fantastic flat-screen TV deal makes sense: The United States is the greatest consumer society that has ever existed on this planet. Shopping is the lifeblood of our economy; capitalism as we know it would founder if we all stopped buying stuff. In this context, "buying nothing" on the very day that the Christmas shopping season traditionally begins would be foundationally unpatriotic. And if that means passing the gravy while standing in line in front of Wal-Mart, so be it.

But there was also something deeply disturbing at the sight of so many Americans waiting this week to get into stores that were already open. Black Friday's metastasizing control over our popular culture is propelled by a poor economy and reminds us how millions of Americans have seen their incomes stagnate or fall over the past decade. We wouldn't be so desperate to be first through those doors if stretching every dollar to its furthest possible extent didn't mean so much, right? And union activists attempting to organize Wal-Mart workers wouldn't have targeted Black Friday for a nationwide strike if the day wasn't so resonant for the national economy, right?

Black Friday has it all: Exploited workers! No Thanksgiving holiday for you, Wal-Mart stock boy, to go along with your rock-bottom wages and nonexistent healthcare! Consumer product superabundance! Just deciding which of the proliferating tablet offerings to buy this year is a task that will intimidate even the savviest shopper. Violence and greed! Even as you are reading these words, someone, somewhere, got a little too frisky with the pepper spray while reaching for that half-off Sony Bravia.

It's a toxic mix that tells us too much about the state of our own culture. The kickoff to the shopping season is crucial to the overall health of our economy, but at the same time the annual spectacle is sending strong signals that something is deeply wrong. Since when did celebrating Thanksgiving while in line to buy an iPad Mini represent the apotheosis of our culture?

Every time Black Friday rolls around, I always wonder how the German sociologist Max Weber, author of "The Protestant Ethic and the Spirit of Capitalism," would have explained what's been happening outside our biggest big box stores over the past few hours. Because buried deep down beneath the jumble of tents and maddening crowds are things he might have recognized as crucial to the evolution of capitalism, profit-inculcating values like thrift and frugality and self-denial. Perhaps Weber got a little too enthusiastic about the supposed correlation between Protestantism and capitalism-friendly habits, but he didn't get it all wrong. Black Friday strikes chords that many Puritans would thrill to: It rewards sacrifice and discipline.

The very name Best Buy is an obvious shout-out to Calvinist frugality. What could be more true to America's deepest cultural roots? The Wal-Marts and Targets and Macy's can compete on price, but they don't have a chance at that level of semiotic purity. In its bland profundity, the title "Best Buy" is more American than baseball or apple pie. It's both a comforting promise, and a call to arms. In a country where 70 percent of the economy is accounted for by consumer activity, the notion of the "Best Buy" is the ultimate in potency. It's the Platonic good, except that you can actually touch it.

Surely Weber would also have appreciated how the urge to profit forces a constant froth of innovative thinking, itself the wellspring of capitalist progress. Take the "doorbuster," for example. Limiting your best deals to the first handful of people through the door has proven so effective a motivator that some of the biggest chain stores now have multiple doorbuster events throughout the entire weekend, opening and shutting their gates like automatic garage doors with terminal cases of the hiccups.

Get in line. The doors open. Grab the best deals. The doors close. Get back in line again! New deals! It's a perpetual motion machine. It's the very perfection of retail capitalism, simultaneously imprisoning and liberating consumers in a revolving door of alternating denial and satisfaction.

The sound of that revolving door is the sound of the throttling engine of a mighty world economy. Sure, it's scary when those doors first crack open, and that tide of human flesh grabs at everything in sight. But it's also kind of awesome. The sterile alienation of Cyber Monday can't compare to the gladiatorial thrill of real human contact.

But the weirdest thing about Black Friday, the part that Weber might have had the hardest time explaining, is how fine the line is between thrift and greed. Consider the case of 19-year-old Ashley Wagner, who started camping outside a Best Buy in Saginaw Township on Monday morning. No china on the dinner table for Wagner, who took a week off from her job at Taco Bell to make sure she didn't repeat last year's disaster, when she was second in line.

With a generator, a can of Pringles and some Little Debbie snack cakes, Wagner said she's ready for the week ahead. On Thanksgiving Day, Wagner's mom will deliver a hot meal from the Turkey Roost restaurant in Kawkawlin.

"Being first in line ensures me I will get what I want," said Wagner. Her door-busting dream: a camera for her mother, a laptop for her brother, and a flat-screen TV and some Dr. Dre headphones for herself.

I'm sure I wouldn't mind a pair of Dr. Dre headphones under my own Christmas tree, but I don't think taking a week off from your job to stand in line to nab a deal on some stylin' audio equipment is an example of either thrift or frugality. Let's not even get into the data that suggest that Black Friday's prices aren't invariably the lowest available, that the whole thing is just one magnificent con job. Whether or not Wagner gets what she wants, there's no escaping the grim reality of that can of Pringles and Turkey Roost hot meal.

It's convenient to criticize the retailers for their encroachment on turkey time and their shameless stoking of greed and bad mob behavior. But the Best Buys of the world wouldn't be swinging their gates wide open if customers didn't keep clamoring to get in. We're locked in a mutual embrace and neither side is willing to let go.

Next year, look for Best Buy to begin delivering turkey dinners directly to the waiting shoppers. Indeed, I'm surprised it hasn't already seen the market opportunity. Who needs a mom to bring over the mashed potatoes, when the market is more than ready to provide?